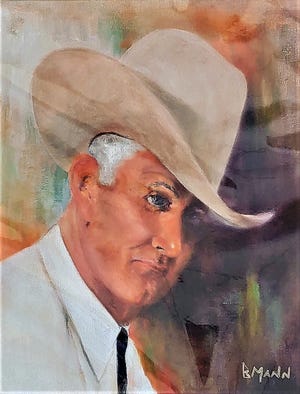 Who shot the sheriff?: The South Plains trial of the century

Editor’s Note: Jack Becker is the editor of Caprock Chronicles and a librarian at Texas Tech University Libraries. He can be reached at jack.becker@ttu.edu. Today’s article on the South Plains “Trial of the 20th Century” is the first of a two-part series by regular contributor Chuck Lanehart, Lubbock lawyer and historian.

In the winter of 1935, two trials dominated the South Plains headlines. The celebrated New Jersey trial of Richard Hauptmann for the kidnapping and murder of the Lindberg baby became known as “The Trial of the Century.” But on the South Plains, coverage of Hauptmann was overshadowed by the Lubbock trial of Virgil Stalcup, charged with the murder of the Dickens County Sheriff.

Stalcup was born in New Mexico in 1907. He was small – six feet tall and 140 pounds – with light skin, green eyes and balding light brown hair. Described as “pug-nosed”, he sported a gold-covered front tooth and smoked constantly. He married at the age of 20 and the couple had a daughter. Stalcup found work as a car mechanic, but soon embarked on a more lucrative, short and intense crime life.

His specialty was armed robbery, stealing from victims in the Southwest. At age 23, Stalcup ended up in Texas prison, where he served 125 years for robberies from Wilbarger, Potter, and Wichita counties.

On April 13, 1934, Stalcup escaped prison and made his way to his father’s home – OB Stalcup – near Lawton, Oklahoma. There he met 38-year-old Clarence Brown of Snyder. They have committed a series of robberies in Oklahoma, New Mexico and Texas.

As authorities approached OB’s home on June 17, there was a shooting. Stalcup was shot in the shoulder and his 54-year-old father was killed. Two police officers were injured by gunfire.

After their arrest, Stalcup and Brown confessed to a number of crimes. Both were transferred to Dickens County to face charges for the robbery of a bottling plant truck driver. Stalcup was transferred to Lamb County for a plea of ​​guilty to a robbery in Littlefield. After the judge sentenced him to ten years in prison, Stalcup told the judge he “had no intention of serving the sentence”. He was returned to Dickens County.

The Dickens County sheriff was 43-year-old Bill Arthur. Born in New Mexico in 1886, he moved to Dickens County as a young man. He married Nannie Stegall in 1908, and the couple had six children. He was elected sheriff in 1931 and the family moved into the living quarters on the first floor of the 1909 Dickens County Jail. Inmates were housed on the second floor of the quaint stone building.

In mid-July 1934, sheriff WJ “Jenks” confronted Yarborough in McAdoo. Yarbrough, a 40-year-old farmer, was suspected of illegally carrying a gun. Yarbrough drew his .25 caliber pistol and shot Sheriff Arthur five times. The sheriff didn’t fall. He drew his pistol and fired but missed as the gunman fled. Sheriff Arthur walked to a nearby icehouse and said to the owner, “Let’s go to the hospital.”

He was treated at a sanatorium in Lubbock, but doctors were unable to remove four bullets lodged in the sheriff’s thigh, buttocks and chest. Nevertheless, the sheriff was soon healthy enough to resume his duties.

His wife Nannie told the sheriff to look for another job. “I would have preferred cotton — whatever,” she said. But her sound advice was ignored.

Yarbrough was soon arrested and taken to the Dickens County Jail, housed in a cell next to Stalcup and Brown.

On August 18, Stalcup and Brown – brandishing a knife – escaped from prison. Within days, Brown was imprisoned again at his Snyder home and returned to the Dickens County Jail. His attractive 27-year-old wife Thelma often traveled to see her husband. During one such visit, she charmed guards and smuggled a gun into prison. The gun would later play a role in the murder of the Dickens County Sheriff.

Stalcup was out for a few months. In the badlands near Clarendon, the outlaw was spotted by a large group of well-armed law enforcement officers. During a ten-mile car and foot chase, officers fired at him with machine guns. He was captured unharmed on October 23 and was sent back to Dickens County. During his two months on the run, Stalcup had committed robberies in at least three Texas counties. A reporter wrote that he was sentenced to 254 years in prison.

Just four days later, the commode on the second floor of the prison overflowed.

The layout of the small five-cell prison required the sheriff to enter the cell block to investigate the problem with the toilet.

Stalcup and Brown played cards in the southeast cage while Yarbrough read in the northeast cage closest to the commode. Apparently none of the cell doors were locked.

The sheriff knelt over the commode to fix the plumbing. Suddenly a shot rang out! Sheriff Arthur stumbled into Yarbrough’s cell and fell to his knees by the bed, mortally wounded by a bullet to the neck.

Stalcup and Brown were gone, along with the sheriff’s guns and car. Investigators suspected that the sheriff had carelessly penetrated the cell block and was murdered with his own gun.

(To be continued in next Sunday’s Lubbock Avalanche-Journal.)