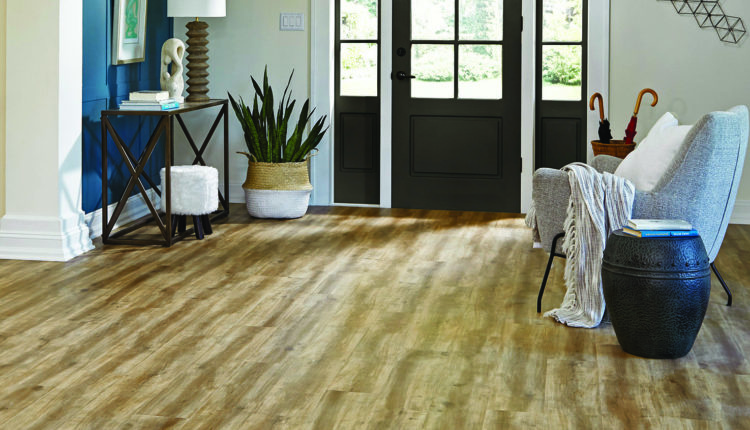 CARTERSVILLE, GA.—The SPC/ rigid core market is estimated to be more than $5 billion with only supply chain issues standing in the way of continued skyrocketing growth. Every few months seems to bring a new innovation or iteration. But many will be surprised to learn who pioneered the fastest-growing flooring segment over the last four years and for the foreseeable future.

In much the same way that Piet Dossche is heralded as the godfather of WPC, the team at Wellmade backs up claims that they invented what is now referred to as SPC or rigid core, which was born as its trademark HDPC flooring in 2015. Over the years, HDPC has grown to include wood/bamboo hybrids.

Illustrating its commitment to the US market and many large customers, Wellmade recently started producing rigid core out of its brand-spanking-new, 328,000-square-foot manufacturing facility, here. The Cartersville plant was built in 2020 with equipment arriving from China in February 2021. By November, product was rolling off the lines for testing.

What precipitated the decision to build? About three years ago, Wellmade strived to offer better service to US customers with a focus on flexibility, reduced inventory investment and to yield more turns. In other words, make its customers more successful. The solution was simple: build a domestic manufacturing facility.

“Wellmade realized it needed to get bigger and expand capacity to service its growing fold of large channel retailers,” said Dick Quinlan, senior vice president of sales and marketing. “We knew we had a winner. Our product is harder—a 1.9-per-cubic-meter density. It’s also a closed cell material, so water can’t enter the product and it mills better. And ours is a single layer, which makes it significantly harder, so it’s much more dent resistant than the competition. But at that moment in time, the SPC opportunity took off, and we didn’t have the capacity to fully take advantage of it.”

Wellmade is one of a number of companies committed to domestic production of rigid core, but one of the few that is both up and running and getting it right. There’s a reason for this: George Chen, co-owner, designed Wellmade’s rigid core plant in China and has replicated it in the US—only with bigger and newer equipment today than what was available five years ago. “George built and designed this product,” Quinlan said. “He designed the machines that are being used throughout the industry. He has all of that knowledge, and now he’s here. It’s not a manager trying to figure it out. Whatever problems we have, George already took the startup through the whole process. Others are just in the startup phase, so their timeline has been longer than initially planned.”

What else makes this plant different than the other domestic SPC facilities? In a word, versatility. “The versatility of this plant is enormous,” Quinlan said. “From what we’ve seen, others have a very narrow capability. We have a very wide capability. We can do any thickness the customer is seeking, 2mm up to 8mm. We can make tiles up to 24 x 48.”

Another differentiator: Other domestic facilities are launching or have launched with fewer lines, meaning less capacity. Wellmade’s new facility has eight lines with another eight to be operational by early 2023, if all goes according to plan. That’s an annual capacity of about 130 million square feet right now and 280 million square feet projected for 2023. Capacity in Phase 1, which includes the eight lines, is mostly accounted for between OEM, large channel and specialty retail.

How Wellmade gave birth to the rigid core category

George Chen was seeing the growth of LVT in the US, particularly what USFloors and Piet Dossche were doing with WPC. But Chen thought the industry needed a better product; he felt the chemical technology of WPC wasn’t as stable as what the industry needed. “You couldn’t cut clean [locking profiles] and it was soft,” Quinlan explained. “It was better than the soft vinyl, but not as good as laminate, for example, for ease of installation.”

So George Chen, in China, started to look at extruded products and said, “What if we did an extruded polymer or extruded plastic product?” Quinlan stated. “We brought in machine manufacturers and they designed the first machinery to make an extruded plastic core to be used for vinyl flooring. So, he created a board that was flexible and closed cell so water couldn’t enter it. A product that could be milled very cleanly and then put a vinyl wear layer on top of it.” And that’s where HDPC vinyl— or rigid core—was born.

Wellmade started to produce what is now known as rigid core and received all the patents in China that are in place today for anything called SPC. “The reason we talk about HDPC and the whole marketplace talks about SPC is because we own the HDPC name,” Quinlan said. “We were the first; we invented this whole category of product.”

HDPC stands for high-density polymer composite. “It is the substrate board, so you can put any product—wood, bamboo, etc.—on top of it, just as you can with plywood or HDF,” Allen Chen explained. “Basically, they become one board.”

Wellmade launched its HDPC vinyl flooring with several high-volume customers. Quickly another problem arose: capacity. “We had about a 100 containers a month capacity, and demand for the product with at least three large customers went through the roof,” Quinlan said. “Within 90 days our three largest customers each wanted 200 containers. We had to quadruple the size of the manufacturing operation. We were under the radar because HDPC was a tiny business, but the reality is the marketplace saw this and said, ‘I need this product.’”

George Chen developed the manufacturing technology with the machine companies, but since there was no IP protection for the machinery, he went into the market and started selling machines with the mindset of, “You can make this, too. Now, I don’t know how they make it with the mix of the chemicals, but if you can figure that out, here’s the machine to make it.”

And that’s when everyone started getting into the category. “As Wellmade was putting investment into the plant, others were buying the same machines,” Quinlan said. “The marketplace starts exploding because SPC is so much better than the other alternatives.”

As time passed, Wellmade would put a wood veneer and then a bamboo veneer on top of the HDPC, which today we refer to as the wood/vinyl hybrid. “We were the first to do that—for sure,” Allen Chen said. Home centers and retailers put that product on the shelf in all their stores and it has done very well, “but it hasn’t been the landmark success that it should be,” Quinlan said. He attributes that to the 25% Trump tariff in 2019, then COVID-19 in 2020, then freight challenges in 2021. making the investment. Our wood business is growing about 400% a year, but it should be growing even more.”

Talk to George and Allen Chen, and they will tell you it’s not about where the product is made or channel of distribution. Rather, Wellmade is positioned as an innovation manufacturer. “This is the core of what we do,” Allen Chen said. “We have about 10 other products we’re developing right now, like MGO and PVC-free.”

PVC-free is becoming an importer, Quinlan told FCNews. “And we’ve all seen MGO come to market, but it hasn’t done very well because the core material doesn’t perform to customer expectations. So, George Chen looked at it and said, ‘Well, you know what? I’m going to build a plant.’ So we just completed building an MGO plant in China. And from that plant we’re going to make some innovative products such as PVC-free, laminate, waterproof flooring unlike the laminate you can get today. A lot of today’s laminate is being promoted as waterproof, but if water moves around the seal then the product fails. This MGO is not going to fail because we offer a high durability coating system on top of the melamine making for a true waterproof laminate. It also comes with an attached pad and is easy to install.”

“So, to sum it up, it’s the ability to sell a thinner product with all the attributes of a thicker product at a more competitive price in laminate, a product that’s PVC-free, that will outperform any laminate product in the market relative to overall performance of water that can be 9 inches wide and can install really easily.” Wellmade plans to unveil that product at Surfaces.

In addition, at Surfaces, Wellmade will showcase a new 2mm dry back HDPC for multi-family applications. “Glue-down vinyl in multi-family is a $2 billion marketplace,” Quinlan said. “We can go with this product where other SPCs can’t go because there are no acclimation issues. Everyone’s scared to use a 2mm dry back because if the environment changes, they get a claim. Our product doesn’t move. It’s highly stable and wants to stay flat.”

But customers told Wellmade they needed the dry back with an attached pad. “That’s not a simple thing because when you put a pad on a 2mm product and you’re gluing it down, suddenly you’ve got ledging issues,” Quinlan said. “The product needs to be aligned, so we had to thicken it up a little bit. But George designed a new locking system that keeps the product from moving side to side as well as up and down. Then we’re taking it one step further by putting a sealant on it, so water won’t penetrate to the subfloor.”

Wellmade is a 23-year-old company that began making one line of traditional horizontal bamboo for the Chinese market. Allen Chen came to the US in 2001 to open a US sales office. He soon launched the line with a distributor in the Pacific Northwest. After doing between $2 million and $5 million in business for a few years, Wellmade’s big break came win 2005, when Allen Chen landed a very high-profile, large channel retailer’s business. Wellmade began to supply that account with carbonized horizontal bamboo, growing the business to $15 million by 2009. The volume was there, but margins were tight.

Things began to evolve with the hiring of Steve Wagner, the marketing guru behind BR-111’s rise to prominence in the mid-2000s. Wagner, the current director of marketing, was brought on essentially to brand the company so it would reflect the taste of dealers and distributors in the United States. He went to China with the goal of having a 12-SKU program that could be put in a single tower display and go through distribution.

Rebranded as Wellmade Performance Flooring, the next step was to open distribution channels. Haines and BPI, two of the largest wholesalers in the country, signed on. “We began to get some traction,” Wagner recalled. Wellmade was largely centered in horizontal and vertical bamboo, and as the industry moved toward strand bamboo, Wellmade entered that arena as well releasing complete lines of solid and engineered strand woven bamboo. “We were diversifying the product lines at that point,” Wagner said. “But we realized we were only going to grow the company so much if we stayed solely in bamboo.”