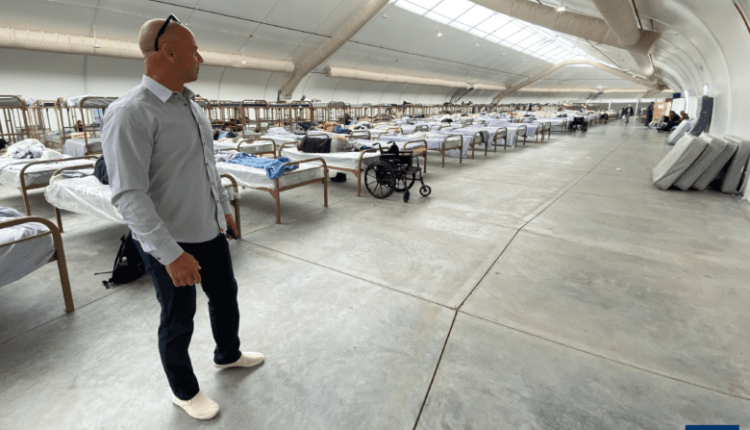 VOA director says Nevada Cares Campus is clean, safe and open to everyone

Pat Cashell – director of the Volunteers of America, which operates the newly opened Nevada Cares Campus – wants to clear up some misconceptions about the massive shelter space.

He said the claims that the shelter is a dirty, drug and alcohol filled place where people are “housed” and workers are indifferent are simply not true.

He pointed to a recent tour of the Washoe County Public Defender’s Office, whose workers, he said, are now happy to send people there to get them out of jail.

“They were the ones who said, ‘You should probably call the news and have them come over here and really see what kind of work you do,'” Cashell said.

Cashell also wants to clarify the claims that have been repeated many times recently about the shelter not having room for additional women, couples or people with pets.

When the Nevada Cares Campus was being prepared for opening, people were told it could accommodate up to 900 people. That is true and could become a reality in winter or under other extenuating circumstances.

For the time being, however, there are 604 beds in the shelter. On Thursday, 553 were occupied and 51 available beds were open to everyone, including women, couples and those with pets.

There were only three dogs and two cats at the shelter on Thursday, but more kennels will be available if people with pets show up.

The kennels are also not in a separate area. People with pets can keep these next to their bed. Pet vaccinations are required, but Cashell said the shelter staff are happy to help people get that done so they can stay inside. He said it usually only takes a day or so to sort it out.

Concerns about where people evicted from camps along the Truckee River might go have been raised by activists, including those who recently occupied Reno’s City Plaza.

Cashell said that since homeless camps have recently been swept along the river corridor and elsewhere in the city, the shelter has seen about 150 additional people seeking shelter.

“We’ve never really seen a big increase from the previous cleanups,” Cashell said. “If they cleared a camp a year ago, two years ago, before COVID, we might see five people come in from a camp of a hundred. But this is definitely the biggest increase we’ve seen in individuals coming in, which I think has a lot to say about the facility as well.”

He said that if the shelter became full due to a sweeper or other reasons, he would ask permission from the cities and the province to increase the number of beds available. This may also require additional staff as the shelter currently operates at a ratio of 50 guests per staff member. He would like to see that number reduced to 30-to-1 if more people stay.

“We’ll fill our beds,” Cashell said. “What happens next depends on the direction I get from the [City of Reno] or Washoe County or Sparks, we have cots available – should we run into an emergency. … I have not yet been given that direction.”

Cashell admits there have been problems with the new shelter, which was built quickly in a matter of months. One such problem was the toilet facilities, which toilets have backed up. But that is being addressed; a plumber was there on Thursday morning to work on it.

“They were residential toilets, which for me, apart from the plumbing problem, is a safety issue. You have toilets with lids on, really heavy lids. I don’t want them tossed around,” he said.

Cashell said he wanted to emphasize how much better the Cares Campus is than the former reception space on Record Street – and that work is still underway to improve it and the services offered there.

The internet was switched on on the Cares Campus on Thursday. Cashell said it will allow the VOA’s case managers to work full-time from there instead of rotating back and forth between the new shelter and the old Record Street.

The VOA case managers are intended to help people with the transition from reception. They can help them with career advancement or help them find relatives across the country who may want them to come home. They can also help military veterans access benefits.

“I don’t want people living here forever,” Cashell said. “It’s not because I don’t like you, or I don’t want you here, but I think there’s a better way to live.”

A few people have already been helped into more permanent living situations, he said.

Cashell said security has also improved since the shelter was moved. VOA employees have seen fewer violent incidents since moving to the new facility, partly attributing this to the extra space for people to disperse.

While there have still been many calls for help to the shelter, Cashell said most were for medical emergencies. New security fences added around the shelter as an access point are also expected to reduce calls for service.

“Safety is huge to me,” Cashell said. “I don’t want anyone to get hurt because these are all people here, and they deserve a safe, clean place to lay their heads at night and feel like their stuff is protected, they’re protected.” Jeri Chadwell came to Reno from rural Nevada in 2004 to study anthropology at the University of Nevada, Reno. In 2012, she returned to university for a master’s degree in journalism. She is the former associate and news editor of the Reno News & Review and receives the Nevada Press Association’s first award for research and business reporting. Jeri is passionate about Nevada history, politics, and communities.