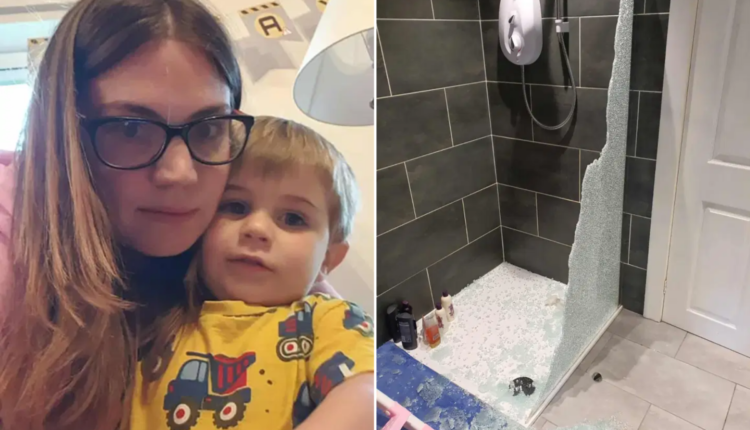 A TODDLER was left terrified after a glass shower screen exploded into pieces just a meter away from where he was sitting.

Mother Bex Carton was potty training her two-year-old son Caelan at their Edinburgh home when the glass randomly shattered “like a bomb going off” on June 28.

The 34-year-old official said she instinctively shielded her son by wrapping her arms around him as glass stormed at them.

The mother of two and the toddler both burst into tears from the terrifying experience that left their clothes covered in glass.

She contacted Victorian Plumbing to complain about the £170 6ft Nova Wetroom screen bought three years ago.

The company responded to Bex, saying they have investigated the matter and concluded it must have been caused by “impact damage”.

Furious Bex has since taken to Facebook this week to warn others about the screens and contact Victorian Plumbing for their response.

She wrote: “Warning. Do not buy from Victorian Plumbing and be very careful if you own glass screens.

“Three years ago we had our shower enclosure from them with a five-year warranty.

“Caelan was sitting on the toilet and I couldn’t hold him near when there was an all-powerful explosion sound and glass flew everywhere.

“I shielded him so we were unharmed, but it was so scary. If we had been in the shower, it could have been very serious.

“The shower screen (which never had a chip or scratch and was in perfect condition) literally exploded. I looked online and apparently it can happen if there is a manufacturing defect in the glass.

“However, Victorian Plumbing called me a liar and refused to accept that there was no impact. The insurance doesn’t cover it because there was no accident.”

Scottish social media users were shocked by the incident which could have ended very differently.

One said: “Eeek! Glad you are both doing well!”

Meanwhile, another wrote: “That’s so scary! I’m glad you’re both okay! Terrible company to deal with!

Victorian Plumbing describes the screen as an “aluminium frame finished in polished chrome”, while the glass shower screen is “hardened for your safety and peace of mind”.

After a complaint about the incident, the bathroom company replied: “Hi Bex, thank you for your patience. I see this issue has been investigated with the manufacturer.

Me and my son were so shocked that we both cried.”

“They have completed their investigation and have advised that this must have been due to impact damage as 8mm toughened glass does not break without some form of impact.

“I can see this was received in 2018 – if this item was faulty it would have shattered within the first few weeks.

“For this reason, we unfortunately do not want to replace or refund this item.
“I apologize for any inconvenience caused by this and if you need any further assistance please let me know and I’ll be happy to assist.”

Today Bex spoke: “Since I had just been potty trained, I sat in front of him at the toddler stage and kept an eye on him.

“He was there for four or five minutes, like toddlers, when there was a bang like a bomb had gone off.

“Glass flew everywhere. Instinctively I wrap my arms around him to protect him and glass just slides down my back.

“I had no idea what had happened, but I looked back and the shower screen was shattered. Since it was safety glass, there was glass everywhere. It was just like it had exploded.

“Me and my little boy were so shocked that we were both crying and I just screamed for my husband who was working in the office upstairs.

“He ran downstairs and couldn’t believe it. I was so relieved that we weren’t hurt as I was standing with my back to it and my map on. My hood and clothes were covered with glass.

“It took ages to clean everything up.”

We pay for your stories and videos! Do you have a story or video for The Scottish Sun? Email us at scottishsundigital@news.co.uk or call 0141 420 5300