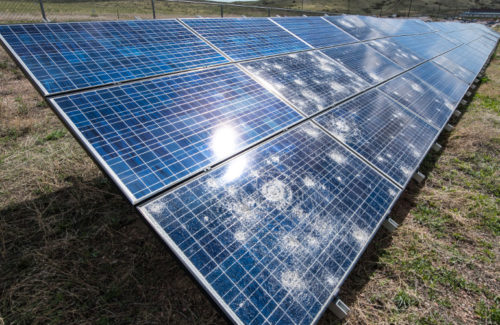 According to the US Energy Information Administrationin 2020, solar energy accounted for 3% of total energy production in the United States, with a forecast of a 5% contribution in 2022. Meanwhile, its share could rise to 14% of the total in the US in 2035 and 20 % by 2050 .

With this current and projected increasing importance of solar power in a globally warming world, where precipitation events are likely to become more extreme after Assessment Report 6 (AR6) of the IPCC it is becoming increasingly important to protect solar panels against dangerous weather such as forest fires, extreme winds and large hail events.

Hail, especially large hail, can damage solar panels both externally and internally (micro-cracks), leading to sub-optimal performance of output power efficiency. In the long run, the functionality of the panels can deteriorate further if dust or water enters these cracks; worse, faulty solar panels can cause a fire.

Large hailstorms remain rare. The period of occurrence is mainly limited to summer (April to September) and some areas are more susceptible to their occurrence than others. However, many areas in the United States, which will undoubtedly be the largest producers of solar energy, are also the areas most at risk. 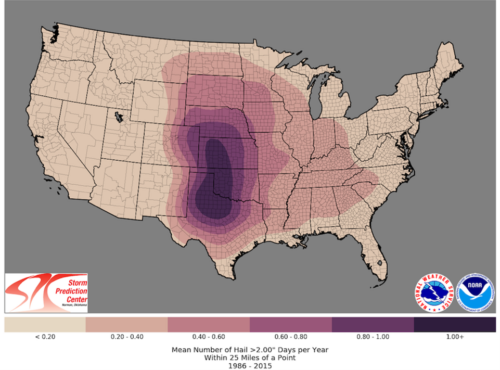 Of the above mapTexas, Oklahoma, Kansas, and Nebraska appear to be most at risk, with some areas experiencing hail events with hailstone sizes > 2 inches more than once a year.

While these major hail events remain rare, the damage they cause can be significant: very important† A combination of a historic correction and some recent cases in Texas is driving insurance prices up (by as much as 400% in recent years). While in the recent past one would have seen insurance policies with a minimum deductible of $100,000, or 5% of the physical damage limit, in recent years that has grown to $250,000 and 5%, and cases of $1,000,000 have been reported. and 15% in Texas† Very often, recent policies have defined maximum physical damage limits rather than full physical damage coverage.

Utility owners are therefore increasingly looking to avoid costs and use weather data to protect their assets. There are various timeframes for generating awareness of the potential hail damage hazard or useful information from this data.

Protective Measures: Timescale for Forecast Range – Up to 3 Days Ahead

During this time, utilities are trying to make their staff aware of a situation that could potentially cause hail, usually referring to the use of numerical weather forecasting (NWP) or statistical models. Although larger scale NWP models do not usually directly predict the occurrence of hail, different model parameters, instability indices and simulated radar reflectivity can provide indirect hints. There are several good models available, some in the public domain and some commercial. Following are some suggestions of freely available models (non-exhaustive):

In addition to the classical model parameters, HRRR model also produces an interesting parameter called GRMAX01, which gives an hour forecast of the maximum hail/graupel diameter for the past hour at the surface.

The NAM and HRRR models proposed above are deterministic, while SREF provides ensemble data that can be used to infer the probability of severe weather events. Some parameters such as instability/hail (especially for HRRR outputs) are considered experimental.

In this time frame, utilities are looking to adopt a decision support system focused on moving the solar panels to a safe position to reduce the risk of major hail breaking the panels. In addition to the above-mentioned NWPs, a solution can be offered by using so-called nowcasts (short range forecasts using observed radar and advanced extrapolation algorithms) based on polarimetric X-band type radar installations.

X-band radars typically have a usable radius of 30-60 km. In addition to the classic parameters such as reflectivity and precipitation intensity, they also provide reliable information about the type of precipitation reaching the surface, including summer hail. X-band radars also have the advantage of high resolution and high update rate.

By combining precipitation type with nowcasting techniques, and applying thresholds to this data, an early warning system for hail hazards with sufficient response time can be established.

Example precipitation type of X-band radar, set to a resolution of 125 m. Red areas are areas of large hail.

Once hail storm damage has occurred, it is critical to be able to prove that major hail has occurred at the utility site, especially as some parametric insurance policies based on agreed thresholds (e.g. occurrence of hailstones larger than 2 inches) are on the rise .

In addition to evidence provided by X-band radars, on-site hail sensors are essential. The minimum they should provide is good stats on the distribution of hailstone size over time and the number of effects per hail size class per event. 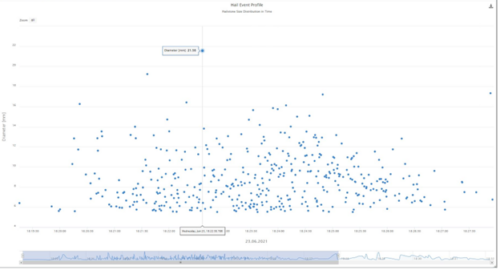 Distribution of the hail diameter over time during a hail event

In setting up protective measures against major hail events, utilities are faced with very different data types issued by different forecasting centers, X-band radar providers, proprietary sensor data, requiring reliable archiving and alerting functionality. So, utilities may be looking for providers that offer end-to-end solutions that can be assembled on a single platform or solution.

A number of candidates introduce themselves, but certainly datasphere seems like a promising solution. Datasphere integrates sensor data and forecast and nowcast data from any source. Further, KISTERS North America also offers its own hail sensors and nowcast technology.

Johan Jaques (°1965) holds a master’s degree in physical geography/meteorology from KU Leuven (Belgium). After having worked for 8 years as an operational meteorologist and later additionally as an instructor advanced meteorology and lead forecaster for the Belgian Air Force Nat Met. Center, he worked for a private weather company MeteoGroup (now part of DTN) for over 20 years. Since 2019, he has been working as Solution Owner for a number of weather-related cloud solutions at KISTERS and as a meteorological advisor.

Shaw to exhibit at Apartmentalize 2022