Porsche Cars North America has announced that it will build a 1.2 MW solar project at its US headquarters and test site in Atlanta. The solar project will be built and operated by Cherry Street Energy. 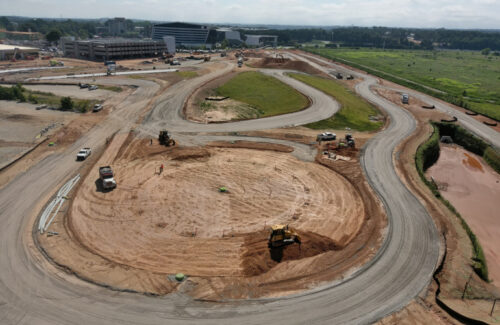 The future solar power system at One Porsche Drive in Atlanta will feature solar panels that will be installed on most new and existing buildings over the next year. This view of the expansion project from the west shows the state of construction as of August 2022, including the future second driver development track in the center. Photo credit: Brasfield & Gorrie via Multivista

At One Porsche Drive, solar energy will cover a significant portion of the site’s annual electricity needs. It also means that the all-electric Taycan sports cars that make up the visitor fleet can be recharged by the sun. The Experience Center, one of two in the United States and ten in the world, is a trackside attraction where the public can drive the latest Porsche models with a personal coach. The solar project will contribute to PCNA’s sustainability goals as the campus adds significant new facilities.

One Porsche Drive is currently undergoing $50 million development, including the construction of a second development track to the public, which should be operational by early 2023. New features of the development also include a Porsche Classic Factory Restoration facility, a parking deck and the already-opened Porsche Service Center South Atlanta. These developments are located on 33 hectares adjacent to the existing 27 hectare headquarters and Porsche Experience Center, which first opened in 2015.

“It makes perfect sense to power our North American home and Taycan fleet by harnessing the Georgia sunshine, and it’s a great demonstration of our commitment to sustainability,” said Kjell Gruner, PCNA President and CEO . “This solar energy project contributes to the overall sustainability goals of Porsche AG. By 2030, Porsche wants CO. to be2 net neutral across the entire value chain and life cycle of newly sold vehicles.” 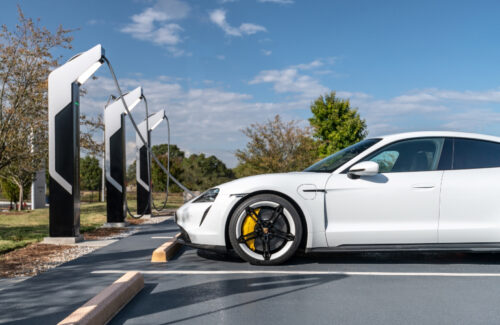 Cherry Street Energy estimates that the array of solar panels on the headquarters campus will generate 2,050 MWh of electricity annually. Installation of the solar project will begin in September and is expected to be completed in 2023, kicking off a 25-year operating agreement between PCNA and Cherry Street Energy. Panels will be mounted on new and existing buildings, the roofs of the assembly areas at the two tracks where customers start their ride, and on a new 950 ft covered walkway from the parking garage to the headquarters.

Cherry Street Energy will own, operate and maintain the project and sell the power to PCNA.

PCNA has made sustainability measures a priority for campus expansion since the early stages of the project. In addition to installing solar energy, the campus will use concrete specifically formulated to lower built-in carbon levels, take advantage of extensive water reuse and recycling, utilize indigenous non-irrigated landscape solutions, green walls and walkways to conserve biodiversity. and include extensive new charging infrastructure for electric vehicles. The new campus expansion is designed to achieve LEED Gold certification which recognizes the high standards of leadership in energy and environmental design previously awarded to the existing One Porsche Drive campus.

Step Inside! Featuring the Front Door