The number of solar jobs rose in 47 states and increased by 9% nationwide from 2020 to 2021 to a total of 255,037 solar workers. These findings are in the annual “National Census of Solar JobsReleased today by the Interstate Renewable Energy Council (IREC), an independent national nonprofit. This job growth came in a year of record solar installations, driven by increased demand for renewable energy from residential customers, municipalities, businesses and electric utilities. 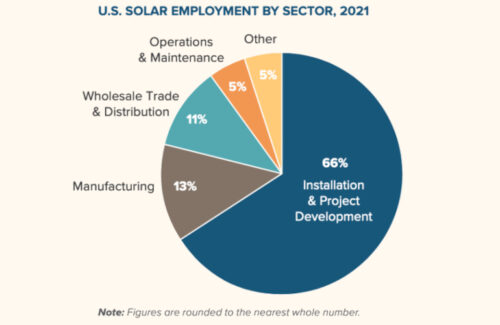 In total, 21,563 jobs were created in the solar energy sector in 2021, of which more than two-thirds of these new jobs (14,350) were in installation and project development companies.

“The U.S. solar industry bounced back strongly from the pandemic to expand its clean energy workforce to all regions of the country,” said Larry Sherwood, president and CEO of IREC. “The future remains uncertain in the face of supply chain disruptions, trade problems and stalled federal policy in the early part of 2022. There is potential for unprecedented job growth in the coming years as federal, state and local leaders take action to expanding clean energy use and tackling climate change.” 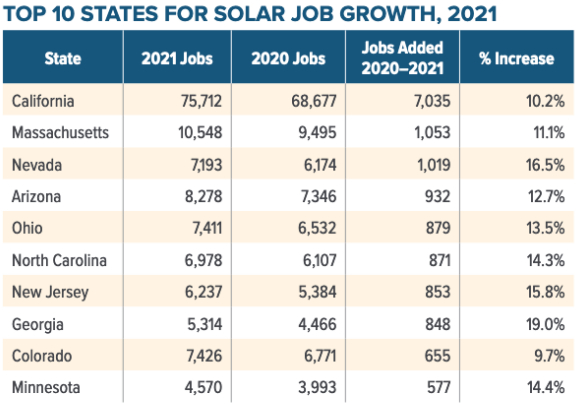 “Solar is an engine for economic growth, creating new jobs and helping us cope with the climate crisis,” said Dan Reicher, Senior Scholar, Stanford Woods Institute and former US Assistant Secretary of Energy. “There is huge and untapped potential to expand solar installations and related jobs in the United States, in an environmentally sustainable way, while helping businesses and families access this renewable energy source.” 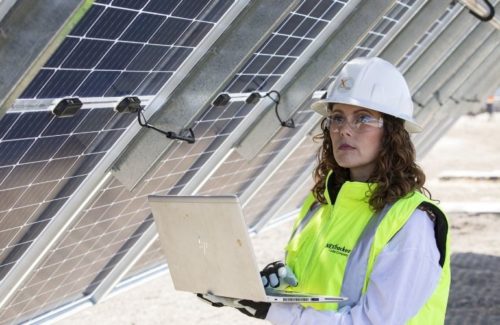 The solar industry still has more work to do to achieve its diversity, equality and inclusion goals and extend the benefits of the clean energy economy to underrepresented groups. The report found that by 2021, women made up just under 30% of the solar workforce, with black workers making up 8% of the workforce, Latino or Hispanic workers 20% and Asian workers 9%. Less than a third of solar companies reported strategies to increase the number of female, ethnic or racial minorities or LGBTQ+ employees.

The solar industry can provide a pathway to advancement and a family-supporting career, even for those without a two- or four-year college degree. Less than a third of entry-level tanning jobs (31%) require a bachelor’s degree, while 65% of companies offer on-the-job training. In a year of tight labor market, 89% of companies reported finding qualified candidates difficult, with 35% saying it was “very difficult”.

This report analyzes data from the US Department of Energy’s US Energy and Employment Report 2022 and an additional follow-up study on solar installations. Both studies were conducted by BW Research Partnership. The National Solar Jobs Census defines a solar worker as someone who spends 50% or more of their time on solar-related work. The National Solar Jobs Census was first published in 2010 by The Solar Foundation, which merged with IREC in 2021.