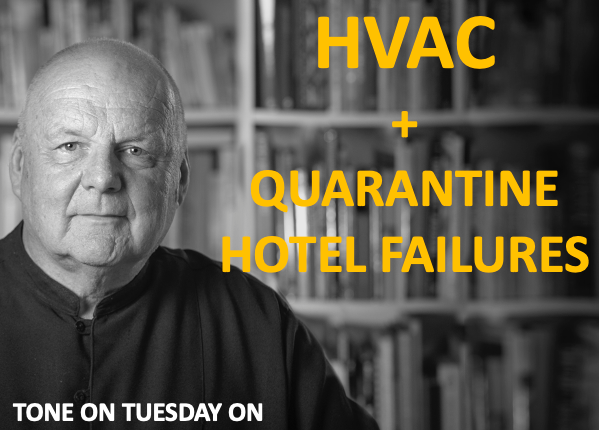 We hear a lot about ventilation failures in quarantine hotels leading to cross-contamination. But how does hotel design lead to these disasters? The answer lies in the somewhat mysterious world of mechanical engineers designing HVAC, heating ventilation and air conditioning.

These are all separate issues, and we need to take them apart to understand where things went wrong, not just in hotels, but failures in both thermal comfort and energy consumption. Let’s start in the middle of the chaos with ventilation.

The primary purpose of ventilation in buildings is to provide residents with fresh air and oxygen and to remove odors and excess carbon monoxide / carbon dioxide. (Ventilation can also be used for cooling, by evaporation or by night rinse, which is discussed here.)

Traditionally, ‘fresh air’ ventilation has been obtained by opening windows and doors, often referred to as ‘natural’ ventilation. The Building Code of Australia requires such openings, as 5% of the floor space of habitable rooms, a measure that has remained unchanged for over 70 years, with no empirical evidence.

The alternative to ‘natural’ ventilation is ‘mechanical’ ventilation, where fans draw outside air in through grilles and ducts. This allows for better control of the air volume and can allow filtering of pollutants. Often this form of ventilation is linked to heating and cooling, although these are clearly different things.

While ventilation meets the human need for fresh air, heating and cooling provide the thermal comfort of the human being and provide a level of warmth or cooling for the occupants. Since the climates in which Western architecture was primarily developed are cool to temperate, heating took center stage. In the past, this was accomplished by burning fuel – in coal or wood fires, gas or oil furnaces, and heating water directed to radiators.

Cooling is different. Where heating is generated directly from energy, cooling is an ‘energy saving’ that can only be achieved by applying energy. This is the secret to ‘air conditioning’ or AC, which is a misleading and incorrect term. It is better called a chiller, a ‘coolth machine’, which makes cooled liquid to cool the air.

The use of compression and then the release of gas pressure is the foundation of a chiller and the technology dates back to the early 20’sth century, with its invention and patent by Willis Carrier. Unlike radiators that distribute heat, the ‘chiller coil’ absorbs heat, which cools the air. It can also control humidity by cooling air to a point that removes excess humidity and then warms it back up to comfort temperature.

Carrier applied his invention to a variety of industries (and in particular to dehumidify tobacco factories in the south of the US), before being shot on such buildings as Grauman’s Chinese Theater in Hollywood in 1927 (the first cinema with AC). Thus, AC cooling is less than 100 years old, overturning the centuries of use of the building itself to create comfort, which we might call ‘building conditioning’, in favor of air conditioning.

That’s why heating radiators are so much more effective than fans that blow warm air. In a similar way, we have recently seen the development of chilled beams, another poor description of what is basically a heat absorber. Made as flat panels, not ‘beams’, and mounted on the ceiling, they can make a room cooler without the need for cooled air. But it is an expensive technology, rarely used, so almost all buildings now use air conditioning.

There are many types of air conditioning that everyone has seen.

The simplest is an integrated AC machine, a ‘window ratchet’: a single box containing a heat pump and fan coil unit in one unit. Often the heat gets trapped in a window or wall and the heat is expelled outside while a fan blows cool air in (or vice versa). There is no fresh air ventilation.

A split system is a bit more advanced, where the compressor outside the fan coil unit is separated into a wall unit inside. Jokingly referred to as ‘Mark Taylors’, to the well-known cricketer who appears in advertisements for these types, seemingly appropriate because they are like him, very effective but not attractive. Again, no fresh air ventilation as it recirculates air into the room.

Even more advanced is the ducted air conditioning: the compressor is outside on the ground or on the roof to produce heat or cooling (as before). But here the fan coil unit is usually in the ceiling and outside air is led to it and then the cool or warm air is blown into the room through ducts. The air from the room is forced out or, for efficiency, returned to the fan coil unit.

This ‘return air’ is returned to the fan coil unit or through a heat exchanger so that the stale air is removed, but the heat or coolness is not lost. The fresh air is supplied in ducts and the return air usually goes back into the ceiling space, called a plenum. Because return air is less critical, leaks can occur.

Most hotels are equipped with ‘ducted air conditioning’, with central compressor (s) for the entire building on the roof or a service floor, and a fan coil unit on each floor. Fresh air is drawn in through louvres, conditioned and blown into the rooms. It is crucial that the polluted air (with the virus) can go in many directions: out through the bathroom drain; through windows and holes in the construction; but usually it is returned to the fan coil unit through a plenum in the hallway. Sometimes return air is used to maintain a comfortable temperature in the hallway (a disaster in waiting).

The ideal in a quarantine hotel is to have 100 percent fresh air, filtered before entering. The air should not be ‘recycled’, but rather vented outside through vents or directed to the roof away from the air intake. If the air is to be recycled for energy efficiency, it must be in ducts to avoid contamination and the air must pass through a heat exchanger before it is exhausted.

But this is rare. More often there are leaks around the door; whether the bathroom is not effectively exhausted; the return air is leaking in the plenum; or worst: the return air is used to condition the hallway. All of this creates contamination from the aerosol COVID particles back into the rooms.

While it is possible to filter the polluted air, such as in airplanes and hospitals, it is very expensive and cannot be easily retrofitted in hotels. On the contrary, hotels use the most common and cheapest form of ducted air conditioning, where leaks are common, contamination is possible and the air pressure is insufficient to prevent contamination.

The solution is to separate heating (with radiators) and cooling (with cooled absorbers) from the fresh air ventilation, which only has to pass once. Ducted air conduction, which together provides heating, cooling and ventilation, with return air plenums, is a recent but very regrettable phenomenon. Another COVID lesson.

Tone Wheeler is Principal Architect at Environa Studio, Adjunct Professor at UNSW and is President of the Australian Architecture Association. The views expressed here are solely those of the author and are not held or endorsed by A + D, the AAA or UNSW. Tone does not read Instagram, Facebook, Twitter or Linked In. Mental health is maintained by just reading and responding to it comments addressed to [email protected]