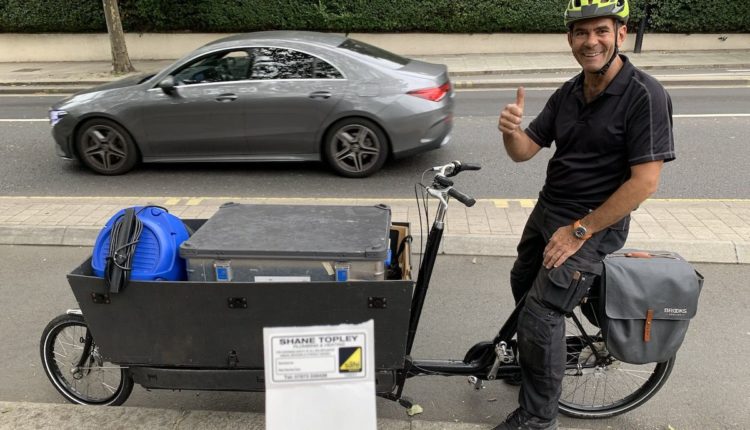 This Plumber Conducts 95% of His Business by Cargo Bike

Treehugger’s design editor Lloyd Alter looked at the long history of using cargo bikes for business and asked an interesting and critically relevant question: “I wonder what combination of difficult parking, high fuel prices and congestion charges would make this way of doing business viable again.” .” It’s just possible that the answer to that question is simply “whatever they do in London” as cargo bikes in general (and e-bikes in particular) are becoming more and more common on the streets of the UK’s capital.

And then there’s the story of West London plumber Shane Topley, who rented an e-bike during the COVID lockdowns to clean up the air in the city. His story, first shared by Transport for London (TFL), shows just how many companies can embrace e-bikes.

What’s remarkable to me about this video is that Topley spends most of his time glorifying the huge personal and professional benefits of the move. This is not about sacrifice or “doing the right thing”, but rather a logical tool for a very specific task. And it’s clear that Topley himself was surprised by how practical the switch was.

Topley tells Treehugger: “I expected to do something between 50 and 60 percent of my business by bike, but I’ve found that nearly 95% of my business can actually be done by bike. Every time I step on it, I’m blown away. It is awesome.”

After contacting Topley over the phone, we pointed out to him that his profession is not the first thing one would think is suitable for cycling and cycling. He agreed 100%, but reiterated that he himself was surprised at how rarely a van is needed.

“It was a real eye-opener – and a great learning experience – to realize how much of my business can be done on the bike,” explains Topley. “All I need the van for is to take big, heavy ladders. And realistically I could rent them and have them delivered. I could almost lose the van.”

The switch to a bicycle is of course not just a replacement for a van. Topley reports that he needs to plan his days more carefully and makes repeated trips home to pick up more supplies. But here too there are advantages, which means that he is home more often for lunch.

“Since the initial lockdown and getting my first electric bike, I’ve used the van twice more,” Topley said in the TfL video. “However, both times I have been seriously disappointed. Once it took me 40 minutes to park. Another time the traffic was wall to wall. I feel quite smug I have to say, driving past all the cars that nose be on the tail.”

Topley was assisted in his move to e-bikes by a London-based social enterprise CarryMe bikes, who helped advise on what type of bike would be right for his specific business needs. It seems likely that many such services will be needed if we are to move to e-bike and cargo bike-based business models on a larger scale.

But while electric cars and vans are subject to tax credits and incentives in many countries around the world, bicycles are often an afterthought. When asked to share what support he received from local or state government for a cargo bike and e-bike based business, Topley kept it candid.

“Really, I’m not aware of any tax cuts or government aid. There are a number of commuter tax schemes, but they are mostly aimed at employees and employers,” he says. “I haven’t seen subsidies for e-bikes and cargo bikes for companies like mine. I also don’t see much of the business or cycling world that focuses on this. All the articles and marketing I see about cargo bikes are aimed at families with children. No one is promoting this one for people like me, and it’s crazy! It’s such an efficient way to get around.”

Noting that his profession — deserved or not — has a reputation for being late at times, Topley jokingly points out that the bike’s efficiency in traffic has obliterated excuses for not being punctual.

That said, it’s not all clean sailing, or pedaling for that matter. Topley notes that the lack of secure parking and the rise of bicycle theft is a major barrier to the adoption of cargo bikes. Clean transport think tank Fare City published an interesting report with a whole series policy and infrastructure recommendations to support both business and personal use of cargo bikes, where safe parking on the street is an important priority. It also highlights the need for public support for no-obligation cargo bike rental programs, which can help overcome hesitation about what appears to be a significant financial risk:

“For many, the last step before purchasing a cargo bike is a longer-term rental, as part of an initiative by a supplier or a municipality.
CarryMe bikes offer up to £500 in hire on various cargo bikes, which can then be deducted from the total cost of each subsequent purchase. Similarly, West Londoner, Bori, has taken advantage of a Richmond Council and supplier partnership
Paddle my wheels to try out a cargo bike for £90 a month, for up to three months. If Bori chooses to keep the bike, the balance of the payment will be spread over an interest-free installment plan; if she chooses not to, the bike will be returned.”

Having lived in Copenhagen before, where cargo bikes were already ubiquitous in the 90s, I’ve seen what it looks like when cargo bikes reach a tipping point and become mainstream. But Copenhagen has taken a long time to get where it was then, and the rest of the world still has a long way to go.

Given the massive social, health and quality of life benefits delivered (sorry) by companies like Topley’s, pro-cargo bike policies seem like a pretty safe place for governments and local authorities to invest their money. Not only would it help purify the air and reduce traffic congestion, but as Topley’s experience confirms, it also offers tremendous health and quality of life benefits.

“In my spare time, I’m an insane climber, and yet that wasn’t really possible during the pandemic,” says Topley. “Getting around with the cargo bike as part of my working day was a great form of exercise, a way to get out into the fresh air, and a really nice way to see London from a different perspective too.”