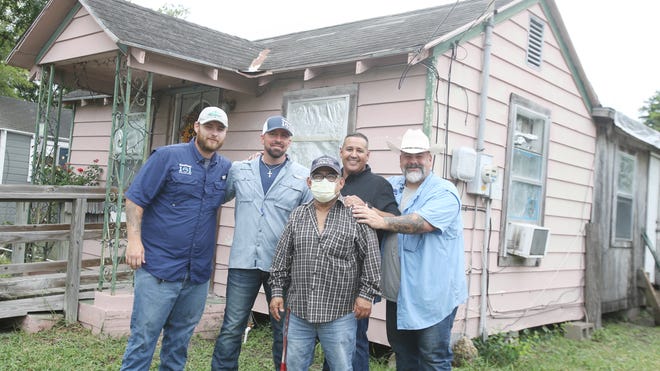 ‘These people are a blessing.’

The rainy weather in South Texas took a break on Wednesday, giving roofers plenty of time to repair the entire roof of Juan Manrique’s home.

RoofTop 101 arrived at his home on the 1000 block of St. Mary’s Street Wednesday morning. They immediately got to work removing and repairing Manrique’s roof.

“He won’t have a problem with rain. It’s been a blessing. RoofTop 101 has been ramped up,” said David Salinas, the Jim Wells County Veterans Service officer. “The only thing Manrique has to worry about is taking care of his wife.”

The roofing company saw a news report about an Alice man in dire need of a roof and caught the attention of a roofing company. After years of seeking help, Manrique finally got a new roof.

“These people are a blessing. They are here repairing my roof from the heart,” Manrique said.

Manrique’s home has fallen into disrepair since Hurricane Harvey in 2017. Since then, Manrique said his house would leak every time it rained and he needed to sort out his belongings so they wouldn’t be destroyed.

Manrique, an Army veteran, shares the home with his 49-year-old wife, Idalia. Idalia has medical problems and over the years Manrique has had to take care of her on a limited income. He counts on community help, but always uses the money for her medical expenses.

In the house there is evidence of the water damage along with mold and mildew. Manrique and his wife had resorted to living in the front part of the house and spent most of their time in their bedroom.

Rueda happened to see the news story and knew immediately that this was a job for the company. He called his boss, Michael Landwert, and they both went to work helping this veteran in need.

The company is from San Marcos, but has recently branched out into Corpus Christi. They had made some connections in the Coastal Bend and were able to contact Manrique in June. Due to the recent rain, however, the work on Manrique’s house had to wait a while.

Michael Landwert, owner of RoofTop 101, said the roof on Manrique’s 1,300-square-foot home would normally cost $5,000, but Manrique won’t pay a cent for the project.

Plumber: Chill out in your kitchen with a new beverage faucet | Siouxland Homes