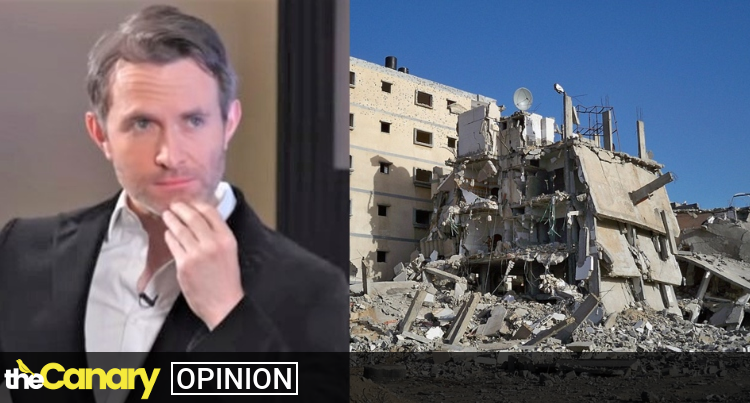 The canary has given extensive attention to the situation in occupied Palestine. Increased Israeli authoritarianism against Palestinians (described by Professor Ilan Pappé as a “calculated and cynical provocation”) prompted a reaction from Palestinian armed groups. As usual, the response has been from Israel grossly disproportionate. It is involved air raids against civilian targets that including Residential area buildings, hospitals and schools. So far, Israeli offensive military actions have taken off hundreds dead, including more than 60 children.

Of course, right-wing commentators have engaged in desperate mental distortion to categorize Israel’s actions as some sort of “self-defense.” The race-to-the-bottom has been a long and predictable compendium of propaganda, minimization, and embezzlement. But in a competitive field, the Spectator, the Conservative Party’s home organ, could eventually win the prize for the most blatant excuse-maker for Israel’s actions.

Two Spectator Articles published on May 20, in particular, are notable for their blatant dishonesty. The first is one article through neo-conservative cheerleader before the Iraq War Douglas Murray. Predictably enough, his article starts with a sample of standard pro-Israel talking points. According to Murray, Israel is only concerned with “defending its own citizens” against “the terrorists of Hamas and Islamic Jihad in Gaza.” Those who speak out against Israel’s atrocities are “ignorant” for “weeping.”[ing] about ‘disproportionate’ death toll ”.

But for Murray, “all this, and much more, has been rehearsed a thousand times before.” So apparently in a British context, “there is only one interesting observation that can be made about this conflict”. And that is:

No matter the magnitude or scale of a conflict involving Israel, the reaction in the streets of the UK is getting worse every time.

The evidence he provides for these claims is not exactly rock-solid. Of course, genuine anti-Semitism can never be excused and must be condemned. But Murray’s source for the allegation about the alleged abuse that the protesters in the car convoy called out is, for example, a article of the Jewish chronicle (JC) Which inclusions a video posted on Twitter. The video appears to show how protesters in one of the convoy’s cars made the comments about a loud speaker.

Although arrests have been made, no one has yet been accused of using racist language. In addition, the video has not been verified as genuine.

The claim that Labor politicians attend a protest with “openly anti-Semitic messages”, meanwhile, is based on another Twitter message. It shows Jeremy Corbyn on stage with “a three-meter-long inflatable anti-Semitic caricature. With horns ”. The clothes and facial hair of the inflated figure to appear to caricatize a member of the Saudi royal family. While the representation could be arguably racist against Muslims or Arabs, it cannot be called anti-Semitic.

… But that’s not the point

But there is a bigger issue here. Assuming all these allegations were true, the question arises, “Why is Murray so concerned with the reactions of British solidarity activists?” The answer, of course, is that he wants to divert attention from the real problem at hand. Namely, Israel’s brutal and inhumane actions during this recent outbreak of violence.

In other words, Murray tries to manipulate his readers by drawing attention to the most reprehensible (alleged) activities of a small number of unrepresentative protesters. This is done to evoke emotional disdain for an intentionally loosely defined Palestinian ‘side’. And it is a textbook example of ‘guilt by association’ fallacy. After all, the people in the car convoy were a handful of people and spoke only for themselves. Likewise, it was probably only one person who brought the inflatable doll to the meeting outside the Israeli embassy, ​​and certainly not Corbyn himself.

The next article in the Spectator‘s lineup of deliberate distortion is a guest column from Pointed magazine editor Brendan O’Neill. O’Neill begins his article with the question:

Did you know that Turkey has been involved in a military attack on Iraqi Kurdistan for the past three weeks?

He begins by listing the various atrocities committed by Turkish troops against Kurds in recent weeks. He then asks melodramatically:

Have you seen any major, noisy protests in the UK over this disturbing act of asymmetric warfare? Have you seen football players waving the Kurdish flag in solidarity with displaced, terrified Kurds? Have you seen social media flooded with furious accusations from the ‘bloodthirsty’ Turks and outpourings of love and concern for the cruel Kurds?

“I don’t have it,” O’Neill replies to his own questions. Well, he shouldn’t look very hard as there have been numerous charges against Turkey’s brutality and its ever-deteriorating human rights record and treatment of the Kurds. all the way through progressive media, also in The canary. But again, let us assume for the argument that he is right – that no Palestinian solidarity activist has made a beep about it.

In this case, this still wouldn’t be a good argument. Because it’s nothing more than the time-tested distraction tactic popularly known as ‘whataboutery’. Whataboutery is one of the oldest and most hackneyed tricks in the right-wing toolkit. It tries to divert attention from legitimate criticism of one actor to another (usually a political opponent) by asking ‘what about?’.

The title of O’Neill’s article, What is the real reason why so many people hate Israel?, adds an additional component to the maneuver. (I think you can see where this is going …). It implies that those who focus on Palestine while ignoring what is happening to the Kurds must have an ulterior motive. And while left unspoken, it is clear enough what O’Neill means: that the apparently inordinate focus on Israel is motivated by a deep-seated hatred of Jews.

This other favored tactic of Israeli right-wing supporters has been proclaimed by none other than Israeli-Palestinian conflict expert Norman Finkelstein. (Finkelstein is Jewish and the son of Holocaust survivors.) Again, it goes without saying that anti-Semitism must be unequivocally condemned. But unfortunately for O’Neill and his whole story, extensive Research has shown that anti-Semitism is much more common in the political right than in the left. And let’s not forget when Tory MPs attended the unveiling of a statue of one current anti-SemiteNancy Astor. When this happened, the MPs in question, including Boris Johnson, were largely given a free pass in their own press.

What makes O’Neill’s article even more pathetic is that the Kurdish independence movement shares common grievances, as well as many common goals, with the Palestinian liberation struggle. And so representatives of the former would certainly recoil at the thought that their fight would be called to apologize for Israel’s crimes.

As if it could get worse …

And just as you think he can’t stoop lower, O’Neill goes on to include Saudi Arabia’s human rights record in his double-minded exercise. He says:

Saudi Arabia may bomb a school bus and kill 40 children as part of Yemen’s brutal war, and most Western activists are not losing a wink. But Israel just has to start pulling its military planes out of the hangar and they get up at dawn on Saturday

Again, he must not have paid much attention. Because The canary has itself condemned Saudi Arabia, along with US and UK support for it, such as extensive arms deals with its hereditary dictatorship, many, many times. In fact, we have condemned the specific action he refers to on at least two separate occasions.

The SpectatorShamelessly propagating Israel’s actions is not only self-refutation, but also self-parody. Mouthpieces like Murray and O’Neill are now engaged in such a desperate mental twist to defend these actions that it becomes an increasingly pathetic spectacle to behold.