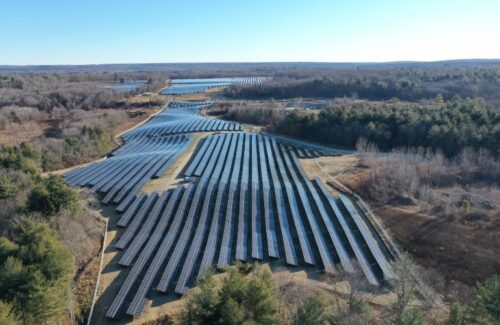 Terrasmart surveyed the site, designed a system to withstand New England weather, fabricated the scaffolding and performed the mechanical installation of the 66.5 MWAC fixed tilt system in seven months. In collaboration with project partners, Terrasmart has converted 270 hectares of forest, farmland and reclaimed gravel mines into sustainable energy production.

Made for one of the nation’s largest utilities, the 150,000-module system uses Terrasmart’s ground screw foundations and GLIDE racking to anticipate frost, heavy snowfall and high winds. With the completion of this project, Terrasmart has installed more than 1.1 GW of solar power in the Northeast over the past two years.

“As the largest solar farm in Connecticut and one of the largest in all of New England, this project demonstrates our integrative approach to PV implementation,” said Ed McKiernan, president of Terrasmart. “Our end-to-end solution enabled us to develop and deliver a robust system to the utility in record time.”

Terrasmart performed 100% of the work itself, deploying 170 team members seven days a week, 10 hours a day to deliver the project on time. The team worked hand in hand with the developer and other stakeholders to compress a 130-week project to less than 33 weeks.

“Serving as Prime Minister for this project has been a tremendous achievement and one of the highlights of my career,” said Richard Van Fleet, Terrasmart Construction Director. “I’m proud of our construction team who did everything they could to compress the timeline and make this project a success.”