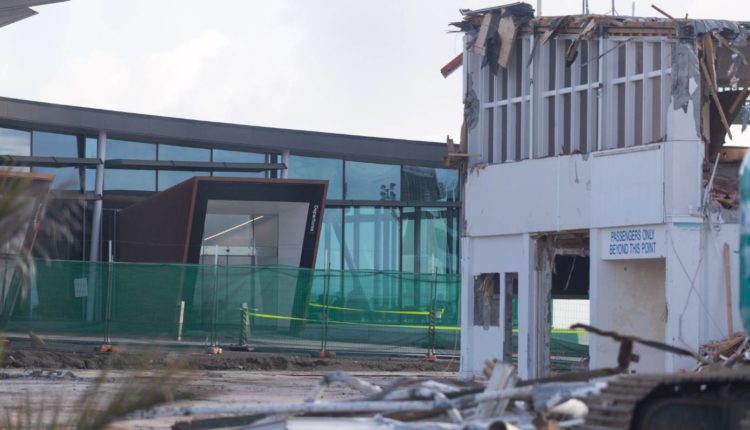 The director and shareholders of a specialized plumbing and pipeline company in Taranaki have been fined a total of $105,000 after illegally removing demolition equipment from the old terminal at New Plymouth Airport.

Offshore Plumbing Services (OPS) Racheal Teresa Cottam and Jeremy Thomas Cottam were jointly ordered to pay $52,500, while Maxwell Gray was fined only $52,500 after the Taranaki Regional Council (TRC) filed a lawsuit against them.

The three are the shareholders – and Racheal Cottam is also the sole director – of Offshore Plumbing Services, which was contracted to carry out demolition work for the New Plymouth Airport project.

Part of their commitments was to remove and dispose of demolition materials from the 53-year-old building, which was demolished last year after the $28.7 million replacement opened.

On Friday, they appeared before the Environmental Court in New Plymouth after pleading guilty each to the discharge of pollutants, namely demolition waste, onto and in the land in conditions that may have resulted in the pollution of a tributary of the Mangaoraka Stream and the groundwater.

They also admitted to releasing pollutants into the air by burning demolition waste outdoors in a landfill.

The crime took place between June 2 and June 9 last year at a rural estate on Lower King Rd in Tarurutangi, which is part of a dairy farm owned by Jeremy Cottam and Maxwell Gray as trustees of a family trust.

At the time of submitting its tender for the work, OPS planned to move much of the material to the New Plymouth landfill.

But by the time the crime happened, that facility had stopped taking much of the material that OPS was supposed to dispose of, was heard in court.

So they instead took some of the material to a rural quarry for what they described as “containment and sorting.”

Asbestos was separated from other materials at the demolition site and disposed of in a compliant manner, according to the landfill data, the court heard.

On the evening of June 9, 2020, TRC officers inspected the property in response to a complaint about a “smoky fire,” Judge Brian Dwyer said.

They found a water-filled pit, made at the quarry near the tributary, into which an OPS truck had just dumped a load of garbage, Judge Dwyer said.

“Adjacent to the pit was an area of ​​about 150 square meters where other demolition waste was incinerated.”

Reports to the court stated that contaminants generated by the landfill and incineration process entered the surface water into the well and into the groundwater, Judge Dwyer said.

“In addition, contaminated sediment from around the pit and burn site migrated under rainfall through streampaths into the tributary and washed away downstream.”

Prosecutor Karenza de Silva said the Cottams’ offense was intentional and that they were guilty at the highest level, while Gray, who was responsible for managing the farm but had not visited the quarry or saw the fire, said on a statement. lower level.

Defense counsel Phil Lang said the crime was not intentional, as none of the defendants realized their actions were criminal.

While Judge Dwyer, who ruled that the ill effects caused by the contaminants were limited in terms of severity, duration and spatial extent, accepted that this might be the case, he said that was not the point in terms of guilt.

He believed that they “did not set their minds on the consequences of their actions or the need for consent”.

“But they should have. Their business is in the demolition industry and as participants in it they were expected to know and comply with their legal obligations.

“Failing to make any inquiries with the council or a legal or planning consultant about what they were doing on the property can only be described as reckless.”