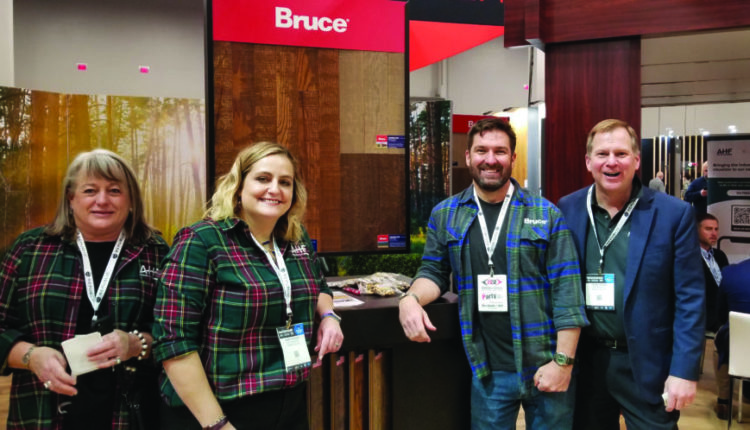 Las Vegas— Hardwood producers are not caving in to the intense competition from wood look-alikes or fluctuating costs on the raw materials side of the business. Quite the opposite—they are continuing to raise the bar in offering products that are not only trendy and visually appealing but also high performing in demanding residential and light commercial conditions.

On the first point, introductions at Surfaces 2022 across the hardwood flooring spectrum continued to focus on wider/longer planks in visuals, colors and stains that consumers crave today. There was also a strong emphasis on pattern with many vendors showcasing herringbone products. The latest introductions also played on various surface finishing techniques, including cerusing, wirebrushing and intricate multi-step stain treatments.

Following is an overview of some of the intros that stood out at the show.

AHF Products officially took the wraps off the engineered counterpart to the previously launched solid version of the Barnwood Living, developed in conjunction with Mark Bowe. The former coal miner-turned craftsman, businessman and founder of Antique Cabins and Barns worked closely with the personnel at AHF’s plant in Beverly, W. Va. (Bowe’s hometown) to develop a line of American-made hardwood flooring that hearkens back to the structures of yesteryear. But make no mistake—this is not simply a product line with Bowe’s name stamped on it. “I’m in the plant working with the folks at Bruce on developing specific visuals for the line,” he told FCNews†

Other Surfaces offerings that stood out for their classic, historic-looking visual appeal include Grand Estate and Joinery—both from Shaw Floors’ Anderson Tuftex division. Grand Estate is an oil-finished collection, a first for AT, that launches in 10 trendy but classic colors. The line is nearly 10 inches wide in random lengths up to 86 inches. “It’s that clean, European white oak visual, thick veneer, but has that oil finish that gives it that low luster,” said Charla Pettingill, director of creative product design – hard surfaces.

Joinery, by comparison, offers a wood floor with an inlay design inspired by a Japanese woodworking design element. “The inlays are actually done before we stain it and it’s reactive white oak, beautiful platform, but it gives it just a little bit more depth and style and really playing off that geometric visual that has been very popular,” Pettingill added. “We know that this is not going to be for every floor. So we have a plank that coordinates with it. So you have Joinery and Joinery Flights available in three colors, but it’s just a unique visual, which is perfect for Anderson Tuftex.”

Mohawk also rose to answer the call for more trendy, desirable looks in hardwood with the launch of Islandair, a 6 ½-inch-wide sliced ​​European oak in random lengths up to 75 inches long on a 38-inch platform with 1.2mm face with a light wirebrushed texture. “Our retailers have been asking for thinner products and traditional colorations,” said Paige Osborne Nichols, product director. “The colors in this line reflect the re-emergence of mid-century design that we’re seeing in furniture and fixtures. So we’ve introduced stains with more copper tones, smokey natural colorations and creams and beiges.”

At the Fabrica Hardwood space, the focus was on a refreshed product offering. Out are maple and hickory visuals, along with whitewashed, antique looks found in its former French oak collection. In are new looks and product expansions based on existing top sellers. “We’ve got 18 new hardwood products that we’re introducing across three collections: Relic, Fortress and Bastion,” said Jamann Stepp, vice president of hard surfaces, The Dixie Group. “Relic is a sister product to Chateau, which is our wide-bodied, 9 12-inch offering with a 4mm sawn face and 58-inch total thickness. Relic is that same build but with a clean ash.”

Bastion is a European white oak with a 2.2mm face that’s 612 inches wide, and Fortress is a 712-inch-wide rustic ash. “With these new additions, that brings our total hardwood offering to 45 SKUs,” Stepp said.

Across the show floor at the Wickham Hardwood Flooring booth, it was new European oak looks that drew the most attention in the space. “This year we’re putting the focus on our new European Heritage collection,” said Paul Rezuke, vice president of US sales. “With this line we’re importing white oak in ash veneers in two grades—Select and Cottage—and we’re putting it in a red pine composite for the core on 4.2mm veneer with lengths ranging from 5 to 7 feet. It’s a really nice looking board with a lot of visual appeal.”

Aesthetically pleasing products were also in abundance at the Provenza Floors space. Collections that drew the most attention, according to Ron Sadri, principal-owner, included its signature Volterra and Tresori lines—each of which have been broadened to address consumer and end-user demands. “We’re featuring more light colors across our popular wood collections,” he told FCNews† He also cited the ongoing popularity of classic formats and patterns. “Visuals like herringbone are still going strong, and we’re also seeing continued interest in wider/longer planks, of course.”

It’s not just aesthetics driving higher consumption of hardwood flooring. Suppliers are also raising the bar on product performance. This is due in large measure to alternative core materials and locking systems. Case in point is Välinge Flooring, which puts the spotlight on its Woodura Hardened wood line, which has been expanded to include longer/wider formats.

“We’re showcasing our larger-format planks (10¾ x 94 inches) as well as the 8¾ x 87 inches, and now we’re moving in to our herringbone products—all of which work well with our click system that can be floated or glued down,” said Zach Adams, general manager, Valinge North America. “We’re also coming out with a commercial product—A Class 33-rated product for medium to heavy commercial—that’s really going to open up doors. In a wood product, that’s very rare to find and yet still keeps the integrity of the wood and the beauty of the wood without oversaturating it with heavy acrylics.”

More importantly, according to Adams, the company is able to offer all this at an affordable price point to consumers and end users in the market for extra long and wide planks and boards. “Some of the large-dimension woods available in the market are priced outside the everyday person’s budget,” he explained. “In the past, if you wanted to get a 10¾-inch product in, you’re talking mid-teens per square foot. With our product, the consumer can have it for anywhere between $5 to $8 per square foot. We’ve created that product to fill the void.”