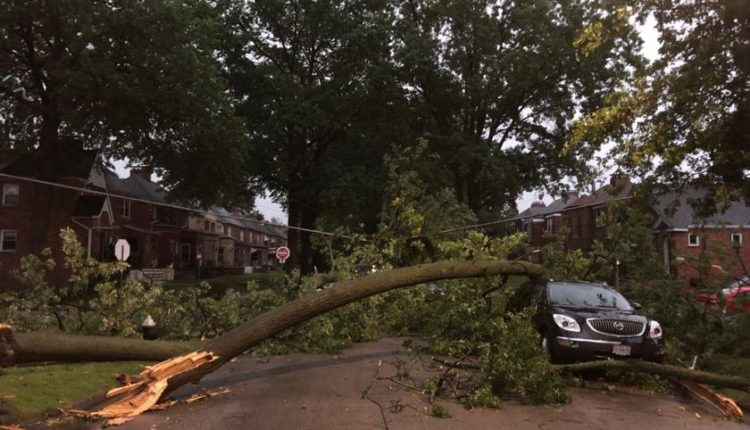 Storms tore through the St. Louis area Thursday night, knocking down trees and utility lines, cutting power and ripping the roof off an elementary school and homes in Warrenton.

At about 6 p.m., the Warrenton Fire Protection District responded to a report of a roof collapse at Daniel Boone Elementary School on Vosholl Avenue in Warrenton.

Part of Daniel Boone Elementary School’s roof has blown off during storms in Warrenton @stltoday pic.twitter.com/QYqojKSKKW

Department Captain Matt Dabbs said a large portion of the roof over the library and office had been torn away. There were janitors in the building, but no one was injured, he said.

The school wouldn’t open until August 24, Dabbs said, or the situation could have been much worse.

“It came out of nowhere,” Dabbs said of the storm that broke through in the early evening. “We saw it come in, but it grew faster than we thought.”

The department received at least 25 calls in about 30 minutes, he said. Several power lines were down throughout the area and roofs of several houses were damaged, but there were no reports of injuries.

“We’ve been inundated with phone calls,” he said.

Reports of damage came in throughout the area, with limbs, trees and power lines in some areas.

Ted Behrhorst, a resident of St. Louis, was out on Thursday night to quietly investigate the damage caused by fallen trees at his home at 6400 Sutherland Avenue. It was the second time in weeks that his house had been damaged by storms.

“Why this has to happen here, it’s ridiculous,” he said, acknowledging that the damage could have been worse. “I don’t know what to say.”

The National Weather Service had reports of trees fallen on power lines in De Soto, a tree blown down near Interstate 64 in Frontenac, and weather damage in many other towns in the area, from De Soto to Kirkwood, Ballwin and the Metro. East as the storms passed.