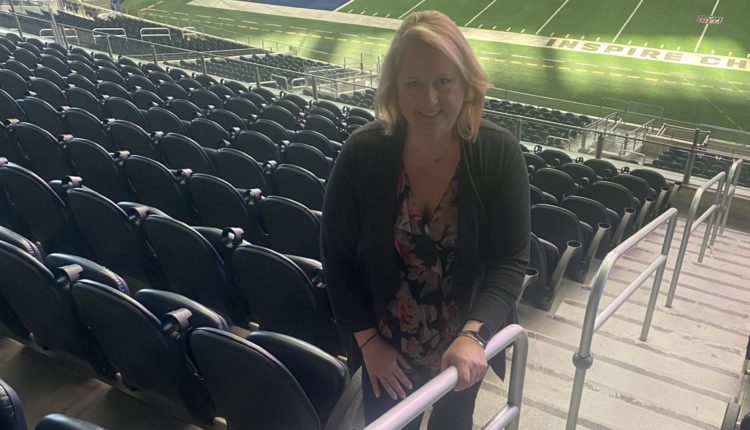 By Steven Feldman Dallas-Flooring retailers came here to the Southwest Flooring Market Jan. 6-7, while continuing with a less severe virus mutation. COVID-19 may still be with us, but in this part of the country, dealers are putting business first, according to Lori Kisner, managing partner, Market Maker Events, show organizer. Pre-registration was even 25% higher than last year until the Omicron peak last month.

Despite a slew of cancellations over the past week, mainly due to potential participants and their teams who have contracted COVID-19 and are unafraid of COVID-19 itself, attendance was expected to rise 15% from last year, according to Kisner. last year. “Given that we don’t have BPI here, along with their 600 buyers, we’re actually doing quite well,” she said.

That sentiment was confirmed by a number of exhibitors. Jamann Stepp, vice president of hard surface, The Dixie Group, said the Dixie space was busy from start to finish on the first day of the show. That statement was echoed by Rotem Eylor, CEO of Republic, and Jason Strong, president of Fuzion Flooring.

“This has been the best Southwest Flooring Market for us in the past four years,” said Strong. “For this region – Texas, Oklahoma – people are less concerned about COVID-19, so they definitely showed up. And the quality of the buyers was really good. They are ready to buy products.”

According to Strong, Fuzion is a brand for medium to medium high-end dealers. “We try to make our products a little different from the market. Whether it’s the way we fill knots in our European oak or what we even do with a basic SPC to make sure dealers don’t get called back.” To that end, Fuzion had success with Laminate, SPC and also sold some of its merchandising units. “And then we had some overstocks that we sold,” Strong said. “People are buying inventory again, which is nice.”

As a relatively new company, Strong attributed Fuzion’s success to a number of factors. “It is clear that the market is good. Forecasts suggest this year will be strong again for our business. The demand will certainly be there. And for us, a lot has to do with where we are in our life cycle. People are starting to hear more about us and they’re starting to see that we’ve entered a pattern of success.”

Kisner said Market Maker Events has at no point considered canceling the Southwest Flooring Market, despite media-fueled Omicron fears. “We never thought about it,” she said. “But we also kept a close eye on the amount of hospitalizations that occurred because of this. At the macro level, we look at countries like South Africa, where it all started. And if you look at their price, it’s falling as fast as it’s been rising. So we pray the peak happens before our next show [in Atlanta, Jan. 26-27]. If not, we’re still in states that don’t lock: Texas, Georgia, Mississippi. They tend to keep things open and let people get on with their lives. And we have to move on with our lives.”

Kisner said shows in less restrictive states have a head start in terms of attendance generation right now. “Our shows are in regions where business comes first,” she said. “If we were in a state with very strict rules, we probably wouldn’t get the turnout because people don’t want to show their vaccination card,” she said. “Some people don’t even want to be vaccinated. They just won’t want the hassle.”

As a show producer, Kisner said she was “shocked” by the recent announcement that CCA Global was canceling its winter convention. “I would never say anything negative about any other show producer, but I haven’t spoken to anyone who wasn’t surprised by that. They clearly have their reasons why they did that.”

On the plus side, CCA Global’s cancellation has resulted in their members signing up to see new products at other shows, be it a regional Shaw or Mohawk, Surfaces, or the Southwest and Southeast Flooring Markets. On the other hand, it creates confusion. “We got calls saying, ‘Did you cancel? CCA cancelled. Do you still have a show?’ And we said, “Yeah, we’re actually setting up in the building. We’re moving forward.” Look, we as event producers have a leadership role in moving our business forward, and we’re approaching this the same way I think the world is starting to approach this, both Democrats and Republicans are now coming together and saying we need to move on. And we “We still need to protect our vulnerable. But we don’t have to close the world off to that group. We have tools now. This isn’t March 2020.”

Kisner noted that people are likely to get sick, adding that they go to events such as football games where many don’t mask. “People have made the decision to move,” she says. “Our industry, the flooring industry, has been so strong. These retailers are forced to look for alternatives due to supply chain issues. They try to find people who can give them the products their customers are looking for. And it’s not always brand specific. I spoke to a retailer yesterday who said he has found four new sources here that will promise him exclusivity. These are new sources that will change his sales because he won’t compete on price with the guy down the street. So he was very excited to be here and very excited to see new sellers that he hadn’t seen anywhere before.”

Ultimately, according to Kisner, since most vaccinated people have mild symptoms when they contract COVID-19, there’s little point in canceling an event. “As a show producer, we want to give people the opportunity,” she explains. “You can choose not to come, as many probably have. Or you can choose to come. They know the risks when they walk through the door. And we let them make that decision about what the priority is. But we are open to business if they want to come here.”

That said, safety was still emphasized at the Southwest Flooring Market. “We still have to be careful,” Kisner emphasized. “We have asked people to put on a mask if they are vulnerable. We have asked people to wash their hands constantly. We have disinfectants everywhere. We have spread our stands. And we’re in a stadium that normally holds 90,000 people and we’re a few thousand. So we have the opportunity to reduce the risks. Look, I think we’ve all learned to live with COVID-19. That is the big difference from last year. We are not afraid. We have the science behind us. We will all have to learn to live with it. And it will be here for a while.”