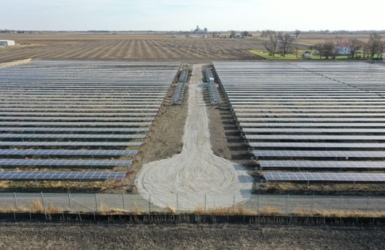 The project is built on land owned by the City of Pontiac and energy sales are managed by Chicago-based MC Squared Energy Services. The project features two-sided modules with single-axis trackers and native pollinator-friendly vegetation benefiting the local environment.

“We are excited to continue the pace of community solar development in Illinois to provide clean, affordable and reliable energy to the community in Pontiac and nearby regions,” said Jonathan Roberts, VP of development for Soltage . “After entering the Illinois market in 2018, we have seen strong community demand for solar energy through our continued partnership with MC Squared and we look forward to increasing access to clean energy for residents and businesses alike. “

The Pontiac project will provide more than 4,000 MWh of renewable energy per year to local municipal, commercial and residential solar subscribers under the Illinois Community Solar Program. Announced in 2019, MC Squared will be Soltage’s exclusive subscription manager for all of the company’s Illinois solar projects for the next 20 years.

Rather than using the typical sod grass, the project incorporates native pollinator-friendly plants, including shrubs, grasses and flowers to cover and protect the soil. This vegetation provides long-term environmental management benefits to the land and local wildlife, and also reduces stormwater runoff.

Soltage entered the Illinois market in 2017 and has raised and invested more than $1 billion in clean energy infrastructure since its founding in 2005. The company has developed more than 100 clean energy projects and has more than 450 MW of total distributed generating capacity under construction and operation around the world. the country.

How to handle consumer sticker shock