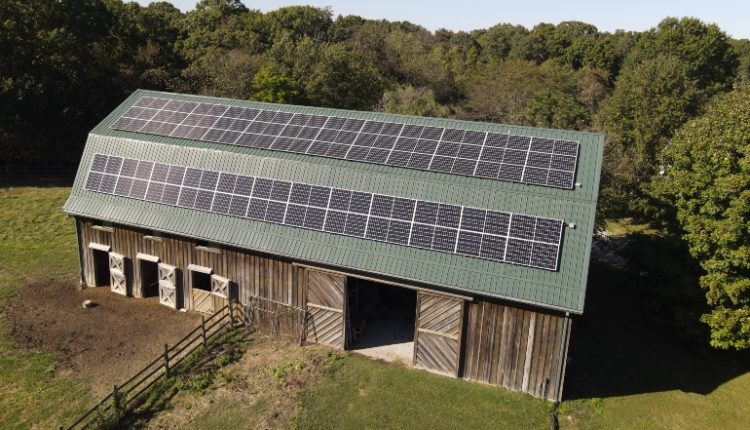 Homeowner Carrie Magill always knew she wanted to power her home with solar. She and her family reside on a 40-acre plot in Millstadt, Illinois, deep in Midwest farm country, where they take a hobbyist approach to agriculture by raising small livestock, keeping honeybees and tending an orchard and garden. 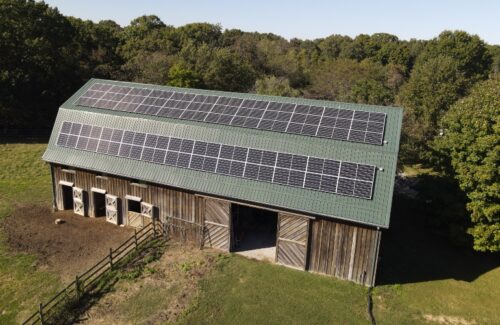 EFS Energy installed a 25.5-kW solar array on two roof sections of a barn that was originally built in 1878. EFS Energy

They call their home Magill Farms and have a barn to boot — one that was manufactured in 1878, shortly after the American Civil War. But that building wasn’t originally built on their plot of land in Illinois. The barn was disassembled and shipped piece by piece from southern Michigan and rebuilt on the Magill family’s property, with the siding refurbished, the roof replaced with standing seam metal and the rooftop purposely facing north-south.

The next step in the barn’s journey included solar PV. 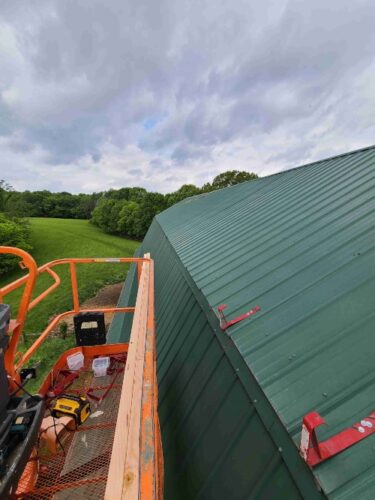 EFS Energy solar installers had to use hydraulic lifts to safely reach and install on the nearly vertical section of the barn’s roof. EFS Energy

However, being from the 19th Century, Magill’s barn had a much different pitch. The gambrel-style roof has four sections, with a more traditional pitch at the top that leads to nearly vertical slopes on either side.

“I grew up with a huge barn in southern Illinois. I loved that barn as a kid, and due to some unforeseen accident, it burnt down when I was in college,” Magill said. “So, when we moved out to the farm, I wanted a big barn, however, nobody builds big barns like that anymore. They only build metal sheds because metal sheds are more practical.”

Practicality wasn’t a concern for this solar installation.

“We take on unique projects like this one,” said Paul McKnight, CEO and founder of EFS Energy. “We like to take on new engineering challenges with different projects that we do.”

EFS installed a 25.5-kW array along the two south-facing roof segments on that more-than-century-old barn. The system design was finalized prior to a site visit using 3D modeling, maximizing the number of modules on those roof sections on the barn.

“I will say that we didn’t have a full picture on what that barn looked like when we sold,” said Eric Kocher, director of business development at EFS. “That was a little bit of going out there and doing the site survey and getting the details on it.”

What Kocher and the installation crew found when they stepped inside the barn were wooden lattices in the ceiling that they hadn’t seen in the pole barns and metal sheds they were used to working on, as well as nearly vertical lower roof sections on the outside .

Initially, the crew thought they’d have to recall down the side of the barn to install those vertical modules. They instead took the safer and more modern approach, using a 65-ft scissor lift to haul components to the roof and a 60-ft boom to hold installers. The scissor lift hoisted equipment over the back of the barn and met the installers at the front. 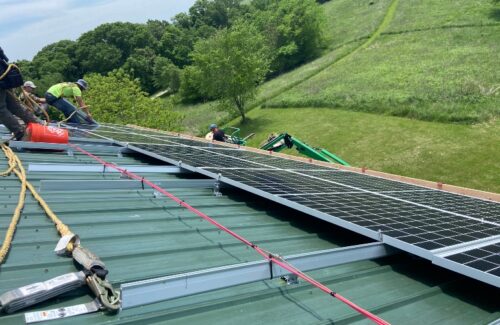 Working on the top section of the barn roof posed its own challenges, including high winds. EFS Energy

“The challenge was it was super windy,” said Jay Gifford, project manager at EFS Energy. “If you’ve ever stood on a standing seam metal surface with a huge kite in your hand, it’s hard to really balance yourself out. We had all the basic stuff that any roofing company, solar company, anybody working on a roof would have, which is standard tote boards on both sides and all that good safety equipment. Everybody was harnessed up, but the big lifesaver was that 65-ft boom.”

EFS used solar equipment they were very comfortable with, which Gifford said was necessary because of the barn’s challenging architecture. The modules are attached to IronRidge racking and mounted to the standing seam roof with S-5! Solar Foot Pedestals. The array is made of 425-WQ CELLS modules and three SMA Sunny Boy inverters.

The modules were installed in landscape orientation, with three rows of 12 on the top section and two rows on the bottom. EFS’s estimate that the array would account for 105% of Magill’s energy use was proven by the fact that she hasn’t received an electric bill since the array came online in June 2021. The array is outperforming original estimates, McKnight said, with greater generation in November and December than anticipated, thanks to the vertical modules capturing more sunlight in lower southern skies during the colder months.

This solar project at Magill Farms was an overall unique experience for EFS Energy, from design to installation, and it was the oldest structure the company has ever installed on.

“I’d say there’s nothing else that even comes close,” McKnight said.