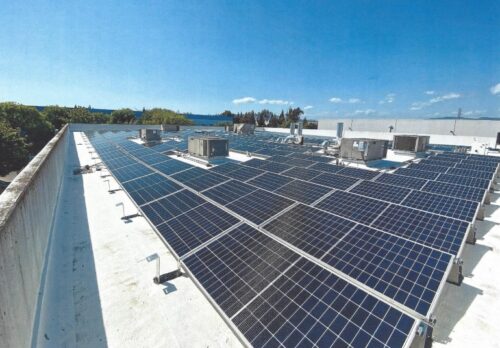 Pacific EcoRisk, based in Fairfield, California, is a consulting and testing company founded by scientists who have been conducting sampling, testing, and research in aquatic biology and toxicology for more than 30 years.

“It has been a company goal for quite some time and we were pleased with the opportunity to reduce our operational carbon footprint. In the long run, we will also be able to keep our annual electricity costs low,” said Jeffrey Cotsifas, president of Pacific EcoRisk.

The nearly 250 kW rooftop microgrid system is expected to produce more than 380,000 kWh of clean, renewable energy in its first year. The project was funded through a power purchase agreement with Solaris Energy and will save the organization $24,000 in its first year of production.

“We thought this would be a nice route because we can have the benefits of the system without it being on our balance sheet, reduce our annual energy costs and then buy after 6 years,” said Cotsifas. “It was a win-win for everyone involved.”

Pacific EcoRisk has an aquatic testing lab that shuts down in the event of a power outage, making it an ideal location to include a backup generator microgrid as part of the system. This increases the resilience of possible blackouts and brownouts and ensures energy independence for the organization.

The project capacity and design is also planned for the future addition of electric vehicle chargers, which will fit with the company’s plans to acquire an electric vehicle fleet for its operations.

“Our team values ​​the environmental benefits that solar energy can provide. Combining that with all the financial opportunities that Power Purchase Agreements can offer Jeff’s and other companies is what drives us every day,” said Nick Perugini, VP of Partners and Projects and co-owner at Solaris Energy.