While site optimization is generally viewed as a practice that occurs at some point in the life cycle of a solar project, developers and EPCs are discovering that significant cost savings can be achieved during several key project phases. 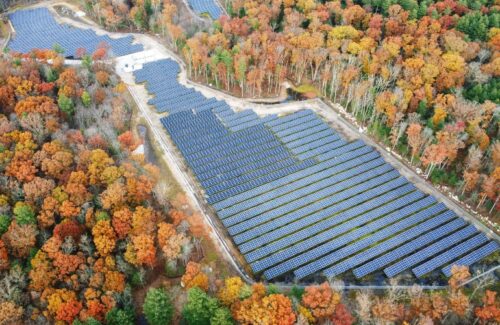 When ClearPath Energy, a developer of solar projects in the Northeast, began work on a 38.25 MW portfolio of six projects in New York, developers knew they needed an experienced design and engineering firm to optimize the site to meet the challenges facing these projects are confronted with. These projects presented some unique hurdles, from meeting National Grid requirements in a short time to ensuring the inverters would integrate smoothly with future energy storage additions.

Knowing that Castillo Technique with more than 300 utility-scale projects, including many in New York and Massachusetts, ClearPath shortlisted the company to provide design and engineering support on these projects. ClearPath ultimately chose Castillo for its track record and reputation for being customizable and offering a range of options rather than forcing customers to stick with standard, non-customized designs.

After Castillo agreed to work on this project portfolio, he had to overcome several key site optimization challenges, which occurred at different project phases – from interconnection application to comprehensive post-design.

Castillo has completed more than 1 GW of solar projects since its inception in 1998. From that experience, the team of senior engineers knew that one way to reduce costs when designing an electrical interconnection application is to reduce redundant equipment. For example, for each of these six ground-mounted projects — all of which had overhead distribution lines at the common link point to the utility — Castillo noted excesses in equipment, such as sets of surge arresters on each pole, additional disconnect switches, and double metering.

Often, a gang-operated air disconnect switch (GOAB), a common switch in smaller electrical substations, is located two electrical poles lower than a main breaker. It is unlikely that anyone will use the release switch as they can open and lock the GOAB from the ground. Operating disconnectors may require additional current-carrying tools, which incur additional costs. They are considered difficult to use and are subject to OSHA-required testing every two years, resulting in further avoidable costs. 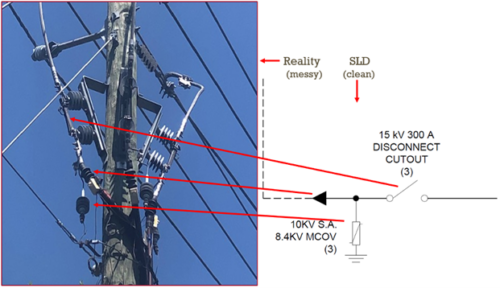 Typical overhead distribution lines at the point of common link

Castillo determined that there was no reason to spend money on these redundant devices, as they were functionally redundant or would not be used at all. Instead, Castillo recommended that these items be removed from the bill of materials so that the money could be saved or invested in other aspects of the six projects.

National Grid is one of the most demanding utilities to connect to in the United States. Unlike his previous National Grid projects, Castillo started work on these six arrays early on, necessitating the rapid production of a large amount of documentation to meet “Phase B” requirements earlier in the design process to avoid delays.

In addition to the usual drawings and cut sheets for the equipment, early in the design process, Castillo had to include setup files for the relay recloser for each project’s interconnection and maintenance point, telecommunications, system powering, and sequence of operation. National Grid is also special when it comes to utility pylon details, requiring full details, exact distances above ground level, and detailed elevations showing the line from the distribution system’s connection point to the power line.

Castillo identified hardware savings of more than $200,000 for each of these six projects. Most of these savings were achieved through the elimination of redundant equipment (an extra GOAB switch, surge arresters on each overhead line, customer revenue and instrument transformers) and the reduction of overspecs on other equipment.

After the equipment procurement was completed and Castillo began designing the six projects, it was tasked with reducing future operating and maintenance (O&M) costs. Castillo worked with the contractor early on to determine equipment preferences.

Castillo focused on design considerations, such as determining the maximum desired cable length, the preferred locations of combiner boxes, whether the combiner boxes are provided with pre-installed mounting rails and which widths are suitable for access roads and reversing zones for vehicles. There are trade-offs with choices such as combiner box locations, as easy access for O&M work can come at the cost of longer string conductors or combiner box output conductors.

The final design Castillo created for each of these six projects required several iterations to find the compromise between the original design and the contractor-recommended design. The example below from one of ClearPath’s solar tracker projects shows the locations of combiner boxes and trenching as originally designed to optimize cable lengths, dimensions and voltage drop in the green, and contractor recommended locations for trenching in the green. minimize red. 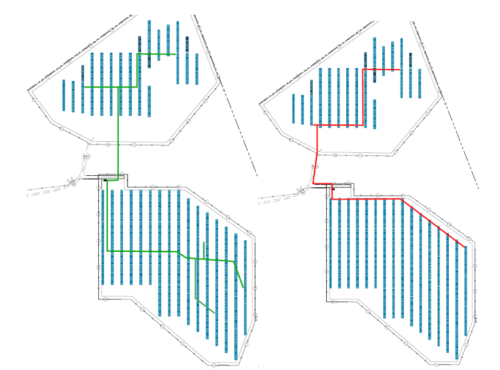 Project design for combine box and trench locations as originally designed in green (left) and contractor recommended design in red (right) for one of ClearPath’s recent solar tracking projects in New York.

While trenching and the length of the output conductors and leads of the aluminum combiner box are minimized by the contractor’s recommendations, the table indicates the increase in length for the copper wiring along with an increase in the mean DC voltage drop. from 1.5% to 1.7%. Despite the varying recommendations for Castillo’s reviewed equipment, it determined the pros and cons of each design to find the most cost-effective solution.

Castillo has learned from his 25 years of experience in the solar industry that flexibility is key, as there will always be design changes as each project progresses. In particular, the unavailability of modules resulted in two project sites moving from Heliene to Longi modules. The modules were relatively similar electrically, but it still required system calculations for operating voltage, currents and voltage drop.

Castillo was able to adapt to these design changes and made sure they didn’t impact the schedule or budget of the project.

Each of the community’s six solar projects needed the ability to add future energy storage. That meant using SMA inverters that could be seamlessly integrated with retrofitted batteries.

In addition, step-up transformers were purchased early on for most of these project sites to ensure the project was a safe haven. Unfortunately, this meant that the low voltage transformer’s interface did not match SMA’s standard inverter connections.

Castillo had to ensure that the correct parameters were specified for the polarity of the array, to ensure proper integration with future energy storage. There had to be an ungrounded array input to the inverter instead of a typical grounded array input. To address the step-up transformer mismatch, Castillo has provided various solutions such as modified bus, cables in conduit and higher quality cables.

Despite the product being unavailable due to supply chain constraints, equipment integration challenges, National Grid interconnection requirements, and a short design schedule, Castillo was able to adapt to and overcome these challenges. Based on its site optimization experience, the ClearPath company has saved $1.2 million across its entire portfolio.

In total, the six projects in this portfolio will generate enough clean energy to power 8,700 homes per year and support New York in achieving its renewable energy goals, including a target to use 70% of the state’s energy by 2030. produced from renewable sources.