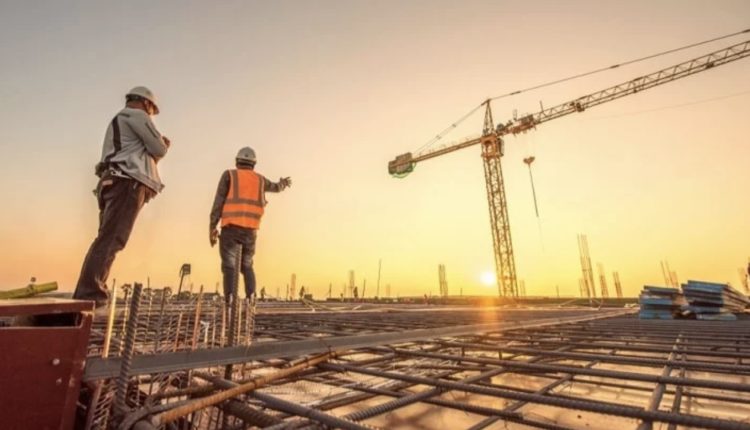 Signs of improvement in 2022 commercial forecast 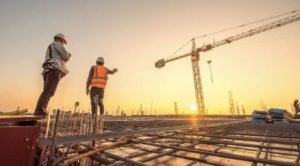 By Reginald Tucker—Certain sectors of the commercial market are expected to continue to experience some headwinds through 2022, but there are signs of improvement on the horizon. That’s according to research revealed in “Construction Market Trends for 2022,” a recent webinar conducted by ITR Economics.

The presentation, conducted by Connor Lokar, senior forecaster at ITR Economics, looked at several key commercial market leading indicators, including architectural bills, commercial start-ups, corporate profitability and end-use segment trends. The general consensus, according to the ITR, is that commercial construction is starting to turn the corner – good news for those serving this critical sector.

“Our forecast calls for a high single digit growth rate for non-residential construction next year,” Lokar said. “It’s not that we expect things to change once the calendar turns, but we expect recovery next year. We expect to see a decrease in the bleeding through the balance this year, and then it really gets better next year.”

ITR bases its optimistic outlook on indices that point to: a) an improvement in the number of new construction contracts; or b) the resumption of projects suspended during the height of the COVID-19 pandemic and in its immediate aftermath. 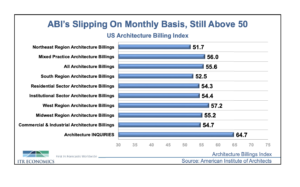 Take, for example, the US Architecture Billing Index (ABI). Virtually all indices for architecture invoices in regions of the country – an indicator reflecting the activity of commercial projects – exceed “50”. (That suggests positive sentiment among companies involved in commercial work.) Among the strongest ABI categories are: West region (57.2); Midwestern Region (55.2); and South region (52.5). In addition, there are positive architecture indices for billing in categories such as “mixed practice” projects (56); institutional sector invoicing (54.4); and commercial/industrial architecture invoices (54.7).

“Any number above 50 indicates that this month is going better than the month before,” explains Lokar.

Even more telling is the “Architecture Inquiries” index, which currently stands at 64.7. That, according to Lokar, is a clear indication that project managers are more optimistic about operating conditions and are planning accordingly.

“The calls are still being made — people are still snooping around,” he said. “They’re trying to figure out whether it makes sense to move forward now or postpone their projects a little longer until the first half of next year.” 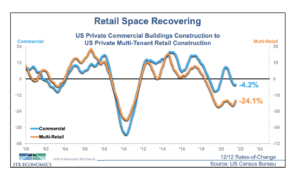 While ITR Economics is confident that the US commercial market is generally poised for a recovery in 2022, it does not expect all end-use sectors to recover at the same pace or even time frame. For example, the civil sector, the hotel and catering industry and healthcare – measured by ‘construction value’ – are currently in the ‘recovery phase’. In contrast, the public sector is considered to be in the “slower growth” phase, while the education, community and general commercial sector is in the “recession” phase, according to ITR statistics. 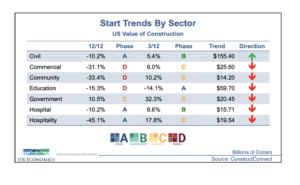 If we take a closer look at the value of the construction metrics (starting trends by industry), several key markets emerge. Industry, manufacturing and the medical sector, for example, are showing signs of recovery, while the office sector is still lagging behind. Private retail construction – an area hard hit by the pandemic – is also showing signs of recovery as the downward trend begins to level off in 2020 (see chart).

“Historically, as we know, commercial markets have been lagging sectors,” Lokar said. “Overall. At this point we might have seen a little bit more upward pressure than we’ve seen so far for non-residential. Normally we see a lag of about a year between macroeconomics in general, with especially GDP, which bottomed out in the second quarter midway through last year. And if we add 12 months to that, it should come off from a non-residential project standpoint. Many executives I’ve talked to feel like it’s will gradually get better as we move forward into 2022. We saw that non-residential construction started.”

So, which sectors are expected to outperform others? According to ITR, so much depends on geography and local economic conditions, but certain conclusions can be drawn. “If you look at civil works, we see more spending on hospitals and, to some extent, education,” Lokar explained. “Government spending has actually increased, 10.5%, from a start-up perspective. On the other hand, the number of start-ups in the hospitality industry decreases by 45% annually. However, we see three favorable quarterly rates of change for all of these sectors. Some things break through on an annual basis, but don’t necessarily show up from a 12/12 perspective. The bottom line is that we generally see better change rates here. It shows that some things are starting to happen – which means that we may see some of those opportunities appearing with greater frequency here in the latter part of 2021. It will get better as we progress.”

The big question mark in the commercial sector is, of course, the office sector. With the COVID-19 delta variant shattering many companies’ plans to bring more employees back to the office, analysts are finding it difficult to predict how this sector will fare in 2022.

“A lot of people were expected to go back to the office this fall — that was the timing many employers had counted on,” Lokar said, citing prominent employers such as Google, Apple, etc. Not the case for Microsoft, which announced the return. from employees to the office indefinitely due to the issue of the delta variant. We saw many other employers signal the same in that regard. I think we’re going to see a long-term slump in this recovery trend for office construction.”

(For more on this story, check out the October 11/18 issue of FCNews.)

To reach climate goals, U.S. must deploy at least 103 GW of distributed solar by 2030