Solar trackers promise greater energy yield than their fixed-tilt counterparts, as they keep the modules constantly pointed toward the sun throughout the day. Likewise, two-sided modules can produce more power than their one-sided solar panel cousins ​​because they have twice the exposure level.

So, is it an advantage to combine two technologies that each provide greater solar yield? Some tracker manufacturers believe so. At the very least, two-sided modules will generate more energy than their front-end power. In combination with certain environmental and design conditions, the generation of the rear can be stimulated even more.

Bifacial cells accounted for 50% of the global solar cell market share in 2021, and that percentage is expected to rise to 85% by 2023, according to the International Photovoltaic Technology Roadmap† In addition, tracker manufacturers reported that the vast majority of recent solar projects using their tracking systems include bifacial panels.

In addition to the benefit of additional backside generation, the bifacial exemption from Section 201 trading tariffs has likely contributed to the proliferation of the technology in the marketplace. But tracker manufacturers don’t all agree on the priority of backside optimization.

Rotating solar radiation on one axis

Single-axis trackers have quickly become a standard in utility-scale solar projects. They can be installed in similar project footprints to fixed tilt racks, with the added production bonus of row-by-row movement to track the sun throughout the day.

The mechanisms that power solar trackers and the controls that optimize positioning for power generation and weather conditions vary by product. Manufacturers often develop control software in-house to accompany their trackers, but targeting that software to bifacial arrays on backside generation isn’t necessarily the best move.

Matrix technologies, a global manufacturer of single-axis trackers, tested optimizing the irradiation amplification at the back with its own control software SmarTrack. During the test and accompanying simulations, the company found that the energy difference between an array that rotates normally and an array that focuses on backside generation was only 0.1% over one year.

Array found that the system was moving erratically, rotating up and down almost every hour to encourage generational gains at the back instead of the front. The backs of bifacial modules are not as efficient as the fronts, so Array believes that the focus should remain on frontside optimization.

“It’s always beneficial to try to maximize irradiation from the air from the front,” said Kyumin Lee, VP engineering for research and technology at Array Technologies. “That’s the best approach, because if you try to improve the radiation on the back, but lose to the radiation on the front, you probably won’t see a gain, or you would probably run into scenarios where you actually lose energy.”

Like system controllers, designs for single-axis solar projects with two-sided panels can remain the same as monofacial projects. Ground albedo (or reflectivity) can be increased with greater driving distances between trackers, meaning fewer shadows and more reflected radiation.

However, increasing row spacing to encourage higher albedo will increase the overall footprint of a solar project.

“Between tracker and tracker, if you have a longer driving distance, there is more ground that can reflect light. So yes, you can have a higher two-sided gain, but I think my argument there has always been that in the end it’s not the two-sided gain that pays the bills,” Lee said. “It’s the total energy produced.”

In many cases, bifacial generation should be treated as unexpected bonus gains. Additional energy generated from behind with greater row spacing is unlikely to account for the cost of the larger landmass used to house it.

White surfaces such as snow and crushed limestone can increase the albedo on the ground – snowfall occurs naturally, but the latter requires additional construction preparation and capital.

Then there is the design of the tracker structure itself. arrays DuraTrack HZ v3 installs modules in one-in-portrait orientation. It uses a “high-rise” bifacial module clamp that clears the panel junction boxes and has extra clearance between the rear of the module and the torque tube (the pipe that rotates the panel row) compared to its other clamp models.

Array tested how the torsion tube affected the rear shadow on portrait-oriented bifacial modules and found that it had little effect on the generation.

“There are much bigger factors that contribute to the way the PV plant produces energy associated with a bifacial module, such as the viewing factor, and then things that get a little out of hand, like the albedo,” said Cody Norman, director of Application Engineering at Matrix Technologies.

The national manufacturer of solar racks and tracking, OMCO Solar, had a different take on the effects of shading caused by coupling tubes. The company produces OMCO Origin Factory-Direct Trackers, which have a two-in-landscape panel orientation with a torsion tube running between the two-sided modules rather than behind them.

The company’s strategy is supported by a study 2019 by the National Renewable Energy Laboratory, Sandia National Laboratories and Cypress Creek Renewables, who found that torsion tube shading reduced rear generation on bifacial modules from 2 to 8%. In individual tests, OMCO found that the shadow effect was greater than reported.

The choice of uniaxial solar tracker and project design is left to the discretion of the system owner. Backside bifacial generation is a given with these projects, but certain design choices made to encourage additional generation may interact with reducing frontside generation.

Two-axis trackers are installed on top of single poles and can hold up to 20 panels per unit. Typically deployed in commercial and residential environments, these systems rank higher than single-axis trackers. This greater distance from the ground has proved beneficial for two-sided modules.

AllEarth Renewables, a manufacturer of bi-axis trackers, teamed up with Sandia National Laboratories to study how bifacial modules performed on trackers in the northern United States, specifically in Vermont, where the company is based. The two-year study resulted in a report who found that bifacial modules outperformed monofacial modules installed on the same two-axis tracker by an average of 14% per year. During the winter months, that number rose to 40% due to the high albedo of snow cover. 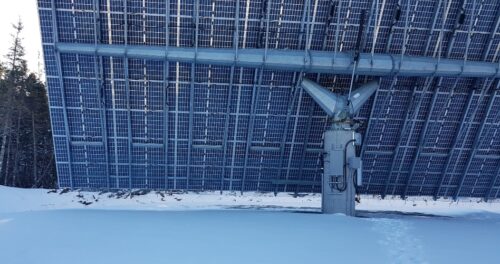 Ground cover such as snowfall creates a higher albedo than other natural surfaces, which can result in higher back gains for bifacial modules. Stephen Mildenberger

“So far, our data is in line with predictions — that we’re getting some damn good production in our environments here,” said David Blittersdorf, president and CEO of AllEarth Renewables.

Two-axis trackers are often installed in northern states because they can adapt to the terrain and annual snowfall of the area. Another benefit the study found during the winter months was that snow fell faster due to the movement of dual-axis trackers and the translucency of double-glazed bifacial modules.

Mechatron Solar, a manufacturer of two-axis trackers, uses table-level reflectors on its M18KD tracker to direct light to the back of two-sided modules. The company reported a 13 to 15% increase in profits using the reflector instead of conventional ground covers in Northern California.

“We recognized not only that [bifacial] technology is a breakthrough, but also that the dual-axis mechanism would deliver a higher bifacial boost than fixed-tilt or single-axis trackers, as our bi-axis tracks the sun across both zenith and azimuth axes, unlike the competition,” said Michael Fakukakis, CEO of Mechatron Solar.

Regardless of the structure, additional solar production can be achieved by using bifacial modules on solar trackers. By weighing costs and design considerations, contractors can decide when the combination is a good fit.