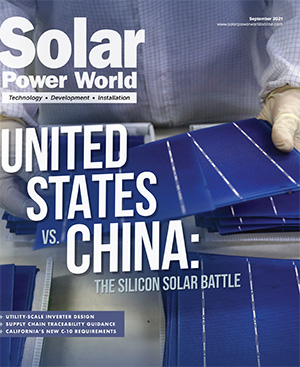 Solar’s role in Biden’s plan to “build back better”

The Biden administration has placed great emphasis on its Build Back Better Agenda, a plan to create jobs, lower taxes and lower costs for working families. The solar industry has a chance to capitalize on that message while fighting climate change and strengthening domestic supply chains — two more equally important concerns for the country. It’s time to bring manufacturing jobs back to the US solar market.

I was at the groundbreaking event for First Solar’s third production facility in Northwestern Ohio in August. This expansion is expected to create 700 new jobs, something Labor Secretary Marty Walsh praised in his speech to the crowd. Many other government officials and representatives of First Solar spoke, often commenting on how these new jobs will help America compete directly with China in manufacturing capacity, but that the United States will treat its workers with dignity and respect — a less than subtle dig in China, in light of concerns about forced labor in the Xinjiang region.

This will all make more sense if you read our review of the back and forth between the United States and China for solar power production dominance on pg. 34. While the news of First Solar’s additional 700 jobs in U.S. panel manufacturing is great, the company makes thin-film panels, not industry-standard crystalline silicon. There is an even greater opportunity here at home to rebuild our silicon solar supply chain.

All silicon solar panel manufacturers in the United States are just panel fitters – they depend on imported silicon cells (and the wafers and ingots for them) to make finished modules. With China holding more than 80% of the world’s polysilicon supply, there is much that the US solar industry has no control over. If the country is to meet its renewable energy targets and bring back more jobs, we need to start making all the components of a solar panel right here at home.

A good first step: Earlier this year, the Senate introduced a tax credit for manufacturers in the U.S. solar panel supply chain. If passed, it could give more incentives to ingot and wafer manufacturers to settle in the country, allowing us to get off the Chinese supply chain, fight climate change and support more jobs – in one smooth move.