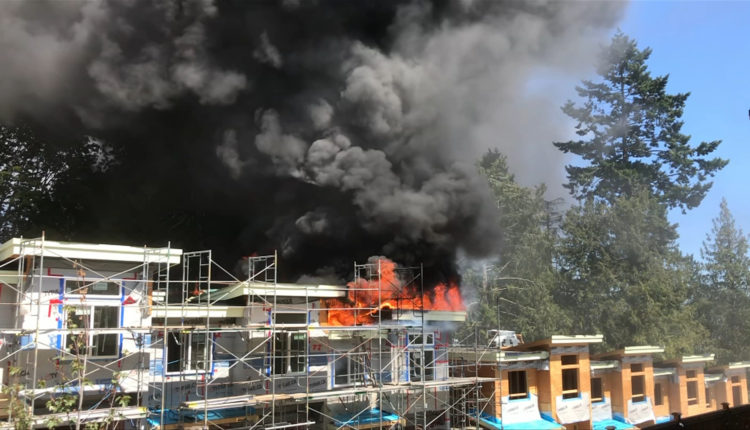 A fire at a housing development site on Bear Mountain in Langford likely started from roofing, firefighters say.

On Saturday afternoon, multiple firefighters from the Langford, Colwood and View Royal Fire Departments spent hours fighting a fire that broke out at four row houses in a neighborhood called Gardner Creek, near Millstream Road.

Several told CHEK News on Saturday that construction crews were working on the roofs of the terraced houses when the fire started.

“They’ve been taking the roof off and back on for the past few days and black smoke just started coming up and then poof, it just went pretty fast,” said one woman.

One said the terraced houses would be finished soon, and the residents would move in two months, while another recalled seeing fireballs coming from the roof.

“I was playing with my kids in the living room and actually looked up and there were fireballs about 10 feet from the roof and the whole roof was engulfed,” a neighbor told CHEK News at the scene.

The fire caused West Shore RCMP to gain access to vehicles on Echo Valley Drive, which is located in the Gardner Creek subdivision, until 8 p.m.

Firefighters were eventually able to put out the blaze from inside the fourplex and adjacent roofs, but the Langford Fire Department told CHEK News that the flames managed to penetrate the roof structure, making it dangerous for crews to enter as it hit. roof started to burn. fail.

The cause is under investigation, but the Langford Fire Department says it appears that roofing equipment may have started the fire.

With files from Nicholas Pescod

Video footage of the extent of the fire in #Langford.

ROAD CLOSURES The West Shore front line officer is on site to assist Langford Fire in a fire on Echo Valley Rd. Bear Mountain is closed between Echo Valley and Golden Eye. The road is also closed at Arngask and Echo Valley. Thanks for your patience. updates to follow