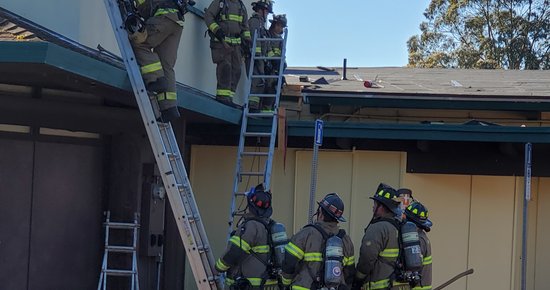 Roofing Crew, Arcata Fire Stamped Out a Nascent Blaze at McKinleyville Shopping Center Before it Got Sketchy | Lost Coast Outpost

Just before 8 a.m. this morning, Arcata Fire District along with CalFire, Westhaven Fire and Blue Lake Fire were dispatched to a fire at a commercial structure at the McKinleyville Shopping Center. Fire chief Justin McDonald was the first to arrive and confirmed smoke was coming from the overhanging roof. The roofing crew confirmed they had smoke in the area where they worked and put out fire extinguishers after calling 911.

Based on the size of the building with visible smoke, the incident commander requested that the response be expanded to include the Humboldt Bay Fire truck and additional engines from CalFire and Samoa Peninsula Fire.

The crew went to the roof and out attic and found light smoke with no active fire. The firefighters used chainsaws on the roof to access where the smoke was found. The source of the smoke was in the structural portion of the interior attic where the roof and attic meet. There was minimal damage to the building and a small amount of water was used. The companies were able to maintain operational status.

Arcata Fire would like to thank our mutual first responders for their assistance this morning and thanks for the prompt actions of the roofing team for early reporting to 911 and deploying their fire extinguishers.