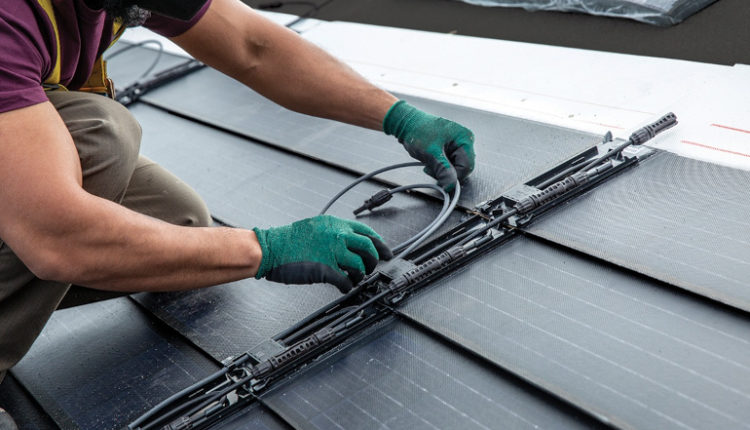 Solar shingles, solar tiles, solar roofs — whatever you call them — are trendy once again with the announcement of a “nailable” product from GAF Energy. These products in the building-applied or building-integrated photovoltaics (BIPV) category of the market take solar cells and condense them into smaller panel sizes that attach to a residential roof on a lower-profile than traditional rack-mounted solar systems.

The idea for solar-integrated roofing products has been around since the beginning of solar generation itself, but the more successful attempts have been made in the last decade. Promising lines of solar shingles (like Dow’s Powerhouse) have largely failed due to their lack of an installation network willing to get on the roof with the solar product.

Tesla has been learning this the hard way with its whole-roof attempt at solar shingles. Solar installers aren’t always familiar with roofing needs, and traditional roofers aren’t versed in connecting glass tiles for electricity generation. This has required Tesla to learn on the fly, being responsible for managing every project instead of subbing out.

“The solar shingle is something everyone’s interested in, but what Tesla is doing is very complicated,” said Oliver Koehler, CEO of solar shingle company SunTegra. “If you imagine replacing the whole roof, not just the solar area — it gets quite complex. It’s not something your average solar integrator even wants to be part of.” 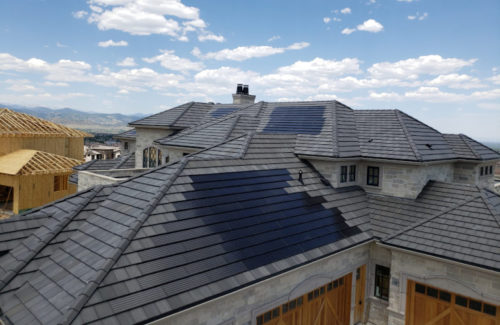 That’s why the more successful companies like SunTegrawhich makes solar shingles that are installed in conjunction with traditional asphalt shingles or concrete tiles, have made their solar roofing products in sizes more familiar to roofers and solar installers alike, and reached out to those communities for installation expertise.

SunTegra has been making 110-W solar shingles and 70-W solar tiles since 2014 and relies on a small group of authorized dealers to complete around 50 solar roof installs each year, mostly in the Northeast for upper-middle-class homeowners.

“We have lots of leads doing literally nothing [other] than just having our website out there. A lot of homeowners love solar but don’t necessarily love solar panels. The issue for us is how do you satisfy that demand,” Koehler said. “Solar shingles and tiles are still a niche, but it can become a bigger part of the market. The costs have to come down and how it integrates with the standard solar installer has to become streamlined from both a sales and product perspective.”

SunTegra may be succeeding with its modest installation record, but the real secret to growing the solar roof market is getting solar shingles on more middle-class homes through existing roofing installation channels. The two frontrunners in this race are roofing giants GAF and CertainTeed, although they’re banking on very different products.

Focusing on roofs rather than solar

The solar shingle with the most real-world experience is the Apollo II product from CertainTeed† On the market since 2013, Apollo can be installed on both asphalt shingle and concrete tile roofs (and slate and cedar-shake roofs). Mark Stevens, CertainTeed’s solar product manager, said the industry can expect a next-generation design within the next year, but right now the Apollo II solar shingle tops out at 77 W, using two seven-cell rows. 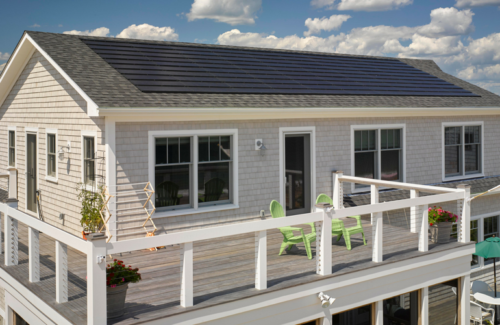 Rather than covering an entire roof with solar tiles, CertainTeed keeps its solar shingle to 46- by 14-in. and allows traditionally sized CertainTeed-branded asphalt shingles to be used around the perimeter of the Apollo array. And although CertainTeed doesn’t make concrete tiles, the Apollo system can still be used on that specialty roof without custom tiles.

“We’re a vetted solar shingle. We’ve been around almost 10 years. We know what our product is and how it performs,” Stevens said. “But right now, solar roofing is only 2% of the market.”

That is why CertainTeed offers full-sized solar panels in addition to its solar shingle. Both products are assembled through an OEM in San Jose, California.

“It’s important for us to have [traditional solar panels and solar shingles] to have a good presence in the industry. It gives us a good option and a better option,” Stevens said. “Apollo gets people interested because it’s low-profile [and] aesthetically pleasing. Then they see the price is slightly more.” But CertainTeed installers can offer traditional rack-and-solar-panel systems as a cheaper alternative. 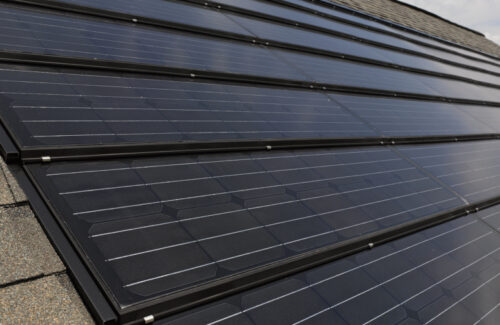 The key to CertainTeed’s success is working through its existing network of dealers. Customers may reach out for a bare reroof and then open to the idea of ​​solar after talking to one of the thousands of certified CertainTeed roofers across the country.

“Solar shingles have been out for a while. But having a company like GAF and CertainTeed bring that information to roofers is a big deal,” Stevens said. “It’s a struggle for those Dows and SunTegras to have those connections. They’re approaching roofers, but it’s a challenge because they’re not already associated on the asphalt shingle side.” 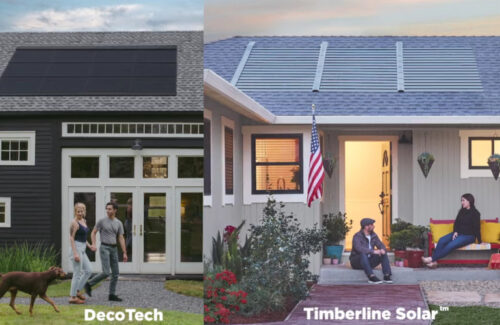 “Our thesis from a design and development perspective was, ‘Let’s make a roof that can generate electricity vs. trying to take a solar form factor and squeeze that down to fit on a roof,’” said Reynolds Holmes, GAF Energy’s VP of services and product management. “GAF Energy is partnered with a company that has almost 10,000 certified contractors who are installing asphalt shingles. If you could take that base of an asphalt shingle, design a way to make [solar] installable just like an asphalt shingle, not change the labor force, not change the tool set but be able to provide electricity and energy through that product — I think we could knock it out of the park.”

The Timberline Solar shingle is approximately 64- by 17-in, while the solar portion (one row of 16 half-cut cells that generates 45 W) measures 60- by 7.5-in. That extra non-solar portion is actually TPO roofing material and is nailed to a roof.

“We designed it to be handled by one person with a nail gun. We reached that max length of anything longer than 60 in. of rigidity became unmanageable for a single installer,” Holmes said. 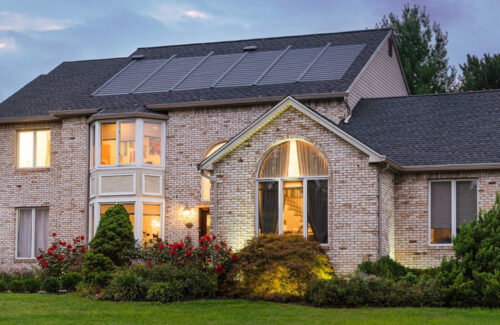 Timberline Solar is installed alongside Timberline Solar HD shingles, which are specialty sized (40-in.) asphalt shingles for the solar roof. By having both products divisible by 10, the staggered pattern of shingles made by roofers can still easily be laid down. The whole Timberline Solar system (which is assembled in the 50-MW GAF Energy manufacturing facility in San Jose, California) was designed for ease of installation — the connectors are on top of the solar shingle and covered with a protective shield after the roof is fully installed.

Texas roofing company Roof Fix is one of those 10,000 GAF dealers that will install the Timberline Solar product as it rolls out across the country. Shaunak Patel, home advisor at Roof Fix, said the company also previously installed the DecoTech product and was often fielding questions about other solar shingle companies, especially Tesla. Patel liked to reiterate that it’s more advantageous to work with a roofing company rather than a technology developer.

“Tesla is effectively a rack-mount system. You have a ton of penetrations in your roof. You have all these potential failure points, especially from a company that doesn’t do roofing,” he said. “We’re a roofing company. We’re not a solar company that’s trying to do roofing.” 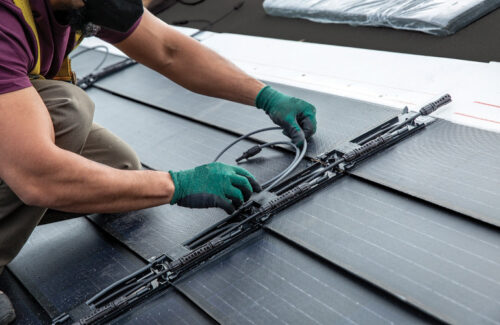 While GAF Energy’s and CertainTeed’s solar roof products aren’t as visually cohesive as what Tesla is attempting, Holmes said realistic demands on aesthetics are not what’s impeding growth of the BIPV market — scale is.

“You have to design and develop a great product that has an accessible price point, but you also have to build the infrastructure to scale this product,” he said. “The thing we’ve leaned heavily on and made design decisions maybe against being the highest power is making sure it’s installable by this 10,000-strong network. At the end of the day, if you have a great product that meets all needs but there’s no one who can install it, you might as well not have a great product.”