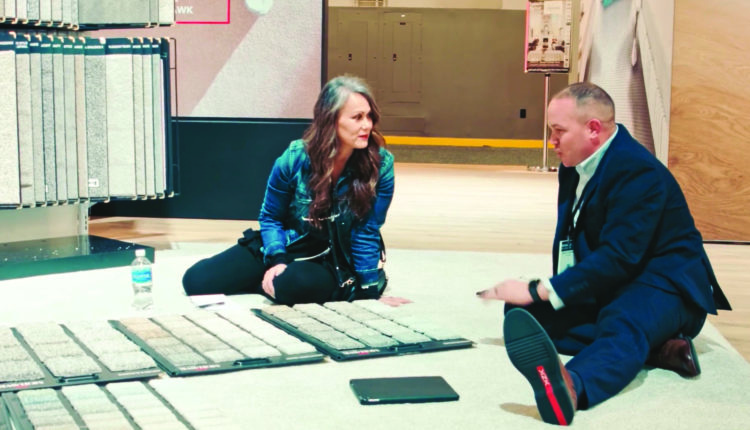 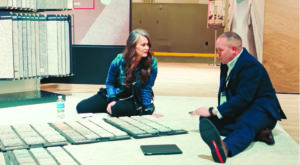 By Reginald Tucker—Iit’s a wrap! After eight weeks, five cities, more than 6,000 miles and the rollout of some of the most anticipated product launches in Mohawk’s history, the Momentum Roadshows ended its run for 2022.

The last leg of the Momentum Roadshows, which took place in Mohawk’s own backyard at its sprawling design center in Calhoun, Ga., wrapped up on Feb. 23 amid strong participation among Mohawk’s retailer partners in the region. In keeping with the previous four events—which made pit stops in Philadelphia; Chicago; Huntington Beach, Calif.; and Las Vegas—the finale was every bit as busy and bustling as the previous events. “Once again, I think it has exceeded all of our expectations,” Laura Bartley, Mohawk’s senior director of marketing communications and events, told FCNews on the last day of the final. “Retailers showed up because they were interested in what Mohawk had to offer. They were all very successful shows.”

The experience wasn’t unilateral; Mohawk also benefitted from closely interacting with its dealer partners. “The one-on-one customer experience that these roadshows provide is so advantageous, not just for our customers, but for Mohawk, too,” Bartley explained. “We get to have really meaningful conversations about what they’re looking for in a business partner, and in turn we talk about ways we can provide that.”

A key draw for many attendees at the most recent Roadshow was the mill tours Mohawk arranged. “Clearly that drove some of the attendance, but we also have a strong following wherever we go, and I think that really is a testament to the sales leadership we have in each of the regions where we held the events,” Bartley noted. “We have customers from coast to coast, and the sales leaders in each of the regions do their very best in building those strong relationships.”

The show must go on

Ironically, the Mohawk Momentum Roadshows, which launched two years ago, kicked off at the height of the pandemic. With so many major national and regional industry conventions and conferences being canceled at the time, Mohawk said it was important to demonstrate leadership by moving forward with its market events. “We were having shows when some were scaling back,” Bartley said. “We know there’s just no replacement for face-to-face interactions.”

The decision to put on the events early in the year was also influenced by tradition. “Retailers expect us to bring them new products at the beginning of the year,” Bartley added. “To be able to do that and still meet that demand, despite all of the challenges, has been good for us.”

It goes beyond that. By moving forward with the inaugural Momentum Roadshows, retailers had faith that Mohawk could indeed execute the events schedule effectively. “What amazed us was the amount of customers who put confidence in us to successfully and safely execute a show,” Bartley recalled. “People wanted to get back to some sort of normalcy and they wanted to do so safely. Overall, it has created a deeper level of partnership with our customers.”

With Mohawk’s postponement of its biennial Edge Summit—the most recent initially slated for December of 2021—the company realized it needed to tweak the Momentum Roadshows accordingly. To that end, it bolstered the program to include invaluable educational sessions that served to complement the product showcase.

In developing the session themes, Mohawk polled roughly 3,000 retailer partners to gain a better understanding of the issues they are facing every day and to learn how Mohawk might be able to provide guidance and educational assistance. What started out as a list of about 20 potential subjects, Mohawk—based on retailer feedback—narrowed the options down to the top three: optimizing digital initiatives; finding and retaining qualified employees; and selling flooring as fashion.

Another new element to the 2022 Roadshow program was the new Customer Service Area, which was positioned, by design, in the center of the event space. Here, Mohawk’s dealer partners learned about Edge benefits, digital programs and other initiatives designed to help them succeed. The main idea behind the layout, the company said, was to signal to attendees that their success is the center of its focus.

Whether it was the educational component or the bevy of new products launched at the Roadshows, dealers said the mission was accomplished. “We chose to attend TISE knowing that the Mohawk Roadshow was there also,” said Craig Phillips, president and CEO, The Flooring Edge, Twinsburg, Ohio. “This saved us traveling to another city and allowed us to consolidate our time out of the office.”

In Phillips’ mind, two things stood out. “The new Karastan soft surface display is a home run,” he said. “It really shows the line well and we are putting it in all three of our stores. On the product side, the improvement to RevWood with WetProtect—and the warranty that goes with it—is huge. The real wood look with GenuEdge is the perfect product for today’s active households. Mohawk is really the leader in bringing this category out of the gutter it had been placed in by the box stores and Lumber Liquidators.”

RevWood was also a highlight for dealers like Jon Dauenhauer co-owner, Carpet World, Bismarck, ND “We really liked the new RevWood Premier with Signature Technology. We were also excited to hear Mohawk is adding more capacity for their laminate flooring to help elevate some of the back-order issues.”

For Michael Longwill, owner of Airbase Carpet Mart, New Castle, Del., the new Karastan display was the focal point. “It has many nuances but useful changes that make it very customer and RSA friendly,” he told FCNews† “First, the samples all face out to catch the customer’s attention. Second, each sample board has two-sided attachments so they can be hung from either direction allowing them to always face out no matter what side of the display you put them on. Third, the sample handles are at the top, so when an RSA or a customer carries the sample, the large sample doesn’t flop around and potentially rip off. Fourth, the middle of the display has a featured item area to focus on products the store would like to promote. Lastly, for the size of the display, it holds a tremendous amount of product without being overbearing. I am excited to get it into my stores.”

Then there were those like David Joseph, owner of Carpet Spectrum in Toledo, who said he likes the practicality of the Mohawk Roadshows in general. “I like the idea of ​​being able to see all the products in one place. When you’re a busy retailer, it’s hard to take a lot of time off and meet with the hard surface rep, soft surface rep, It’s nice to have it all under one roof where you can see all the new stuff and move on about our daily business.”

Solar was nation’s fastest growing source of electricity in 2021