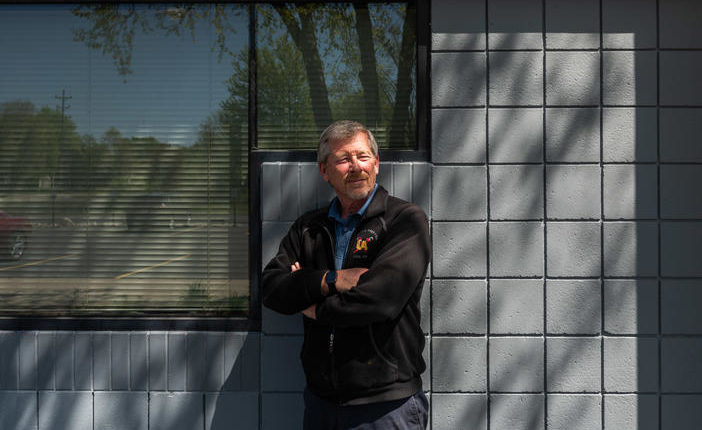 President Biden Wants To Replace All Lead Pipes. Flint Has Lessons To Share

Harold Harrington is a chief plumber. Repairing people’s pipes is what he does. But it was something he found in his own home in Flint, Michigan that bothered him.

“This came from my house,” Harrington says, holding a small piece of pipe. “This galvanized piece was in my basement. It fed my upstairs faucet and this comes from my upstairs bathroom … It’s full of lead. ‘

Harrington is one of tens of thousands of Flint residents whose polluted drinking water draws attention to a threat facing communities in the United States.

Flint’s lead crisis started in 2014 when the city’s drinking water source was switched to save money. Water from the new well had not been properly purified, causing damage to old pipes that leached in the drinking water.

Lead can damage the brain and kidneys. Of particular concern is the effect that lead can have on young children. The U.S. Centers for Disease Control and Prevention says lead exposure can slow development in children under age 7, leading to learning and behavioral problems.

President Biden has proposed a jobs and infrastructure plan worth more than $ 2 trillion, earmarking billions to replace the country’s lead water pipes. When he announced his American Jobs Plan in April, the president pointed to Flint’s troubles as a cautionary tale of the dangers of disintegrating infrastructure.

“Everyone remembers what happened in Flint,” Biden said. “There are hundreds of Flints all over America.”

But Flint is also an example of how the problem can be solved – and the many challenges that can slow progress.

Harrington helped, and it hasn’t been easy. In his local union office, Harrington is holding an old lead pipe that has been twisted like a pretzel after decades underground.

“You’re not just going to dig a hole, because it has been around longer than the gas lines, the cable lines, the fiber optic lines. You have tree roots that have been growing for the last hundred years,” says Harrington.

Even determining if the pipe in the ground is lead, copper, or a combination can be tricky. In many cities, the old records of the water department are incomplete or outdated. And for decades, water utilities have only replaced pipes to the property line, creating service cables that are a mix of lead, galvanized and copper pipes, which now must be completely replaced.

“It’s a big project,” says Harrington, “and they’re all different.”

U.S. Representative Dan Kildee, D-Flint, has funneled federal funds for the past six years to mitigate lead’s long-term effect on neighbors in his hometown. He says the crisis could have been averted had the nation invested more in infrastructure in the past.

“If 10 years ago $ 15 or $ 20 million could have been allocated to upgrade the water system in Flint and find a way to eliminate leading service lines,” he says, “the half a billion dollars already committed are. avoided. “

The Flint water crisis brought the issue of old lead pipes to the national scene. But public health advocates have been warning for years that the country needed a comprehensive plan to replace lead pipes.

“A lot of people think this is only a problem in, say, Flint or a few large, older cities,” says Olson. “But in fact it is spread all over the country and really poses a major threat to public health.”

Nationally, the number of lead and galvanized pipes to be replaced is estimated at 8 to 10 million. Biden’s proposal calls for an expense of $ 45 billion, or about $ 5,000, to replace each main service line.

But the price tag could end up being much higher. The American Water Works Association, an industry group representing water utilities and manufacturers, estimates the cost at more than $ 60 billion.

That concerns Allen Overton. He is the pastor of Flint’s Christ Fellowship Missionary Baptist Church. Overton joined others who complained about having the city replace all of its leading service lines. In 2017, a federal judge approved a settlement whereby the state of Michigan agreed to spend nearly $ 100 million to replace all of Flint’s lead-based and galvanized service lines in three years. The piping replacement program is two years behind schedule, but is expected to be completed this year.

As the Biden administration pushes to replicate Flint’s experience of plumbing replacement, Overton is concerned that more affluent suburbs would exhaust proposed federal funding and leave out disadvantaged communities. He wants money to be set aside for communities of color first.

Is replacing pipes the right move?

Some wonder if lead service lines should be such a high priority. Pipeline replacement makes up nearly half of the $ 110 billion proposed by the Biden government to upgrade the country’s water infrastructure. But by some estimates, the US will have to spend nearly $ 1 trillion to upgrade the entire drinking and wastewater system, from water treatment plants to distribution lines.

“There was a major investment in distribution systems after World War II,” said David LaFrance, CEO of the American Water Works Association. “Those pipes are all maturing and all need to be replaced.”

Others point out that water systems can reduce the risk of obsolete pipes without a huge, complex task of replacing millions of service pipes.

“There is an approach to corrosion control that limits and prevents much of the lead leaching,” said Michael Shapiro, a former water officer with the Environmental Protection Agency. He says it can be done by treating water with anti-corrosion chemicals. But, he says, “Flint showed to an extreme degree that there are limitations to that approach.”

Some cities are in no hurry

Even with a federal initiative, there are likely to be those who resist replacing old service lines. And there is even some reluctance in Michigan, which has its own mandate to remove all leading service lines within the next two decades.

Mason’s small bedroom community was founded in the mid-1800s in southern central Michigan. And some of the estimated 1,400 main service lines date back to that time.

On an unusually warm April morning, Mayor Russ Whipple sits in his backyard listening to birds singing. He says Mason is slowly replacing old pipes during routine roadworks. He grapples with the state’s mandate and insists there is no need to rush it.

“Our lead almost never reaches the threshold,” he says. If it does, it hardly does. And usually we find out that the reason was because of a bad test. ‘

Despite his reservations, Whipple says that if federal funding becomes available, his community will likely file an application to prevent the cost of pipe replacement from being passed on to the small town’s water buyers.

Just up the road from Mason, in Lansing, the state capital, the city’s water utility has replaced all of its leading service lines. But it took 12 years – and a bit of arm twisting.

Dick Peffley is the Managing Director of the Lansing Board of Water and Light. He says most Lansing residents volunteered utility workers in their homes and allowed them to dig their lawns to replace the plumbing. But some don’t. To get those reluctant property owners to open their doors, the utility had to use what Peffley describes as “ hard love. ”

“We just finally sent out a series of letters saying, ‘Listen, we need to have your main shift replaced for your own safety. We may be forced to turn off your water, and we’ll turn it on when we run a new shift,’ ” he says. “That letter caught their attention.”

The city of Flint hopes to soon join the communities that have replaced all of their leading service lines. Flint Mayor Sheldon Neeley plans to inspect the last 500 service lines this summer. “It is a journey,” he says, “and we are now concluding that journey.”