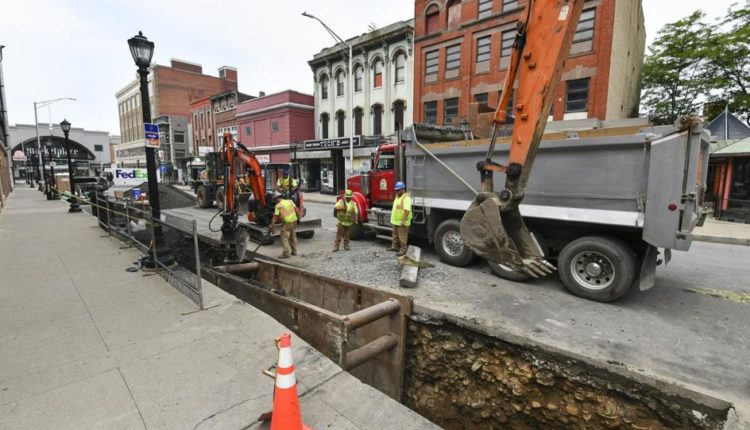 A problem with backup toilets at the Lackawanna County Government Center helped reveal an unrelated problem under a street outside.

It all started last month when the county began recalling workers “full throttle” to the Government Center at 123 Wyoming Ave., in the wake of the COVID-19 pandemic, county chief of staff Brian Jeffers said.

“For the first time in a long time, the bathrooms were used regularly and we had some plumbing problems,” he said.

In late June, county officials closed the restrooms on the second through fifth floors of the six-story building as they teamed up with Pennsylvania American Water, which owns and operates the city’s sewer system, to find a solution, he said. .

Mark Dougher, the county director of maintenance, said it had been determined that the volume of the line exiting the building and connecting to the Center Street sewerage system needed to be increased.

That solved the county’s problem, and after a little more than a week, the closed toilets reopened, Jeffers said.

However, as part of its work with the county, Pennsylvania American Water ran a camera through the sewer line on Center Street and then north on Penn Avenue behind Government Center, Dougher said.

Then the utility discovered a collapsed sewer pipe in block 100 of Penn that “had nothing to do with us,” he said.

A contractor last week began replacing about 80 feet of 12-inch sewer pipe on Penn, along with a collapsed manhole, utility spokeswoman Susan Turcmanovich said in an email. The project was due to be completed on Thursday.