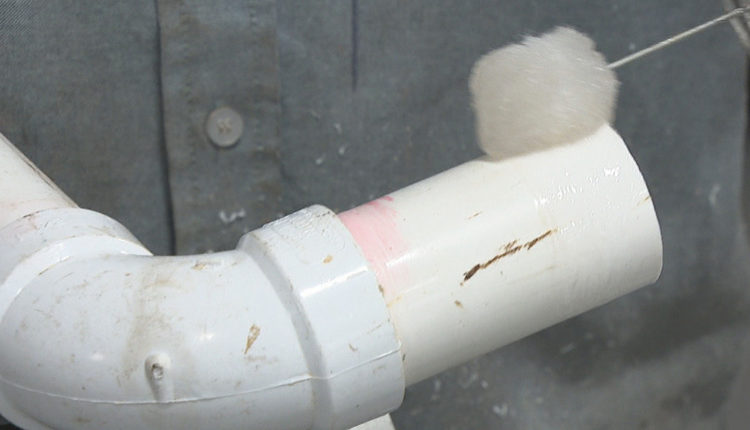 BOSTON (CBS) – Union plumbers say it’s not just the dust from cutting PVC pipes that makes installing them so dangerous. Joe King is a plumbing instructor for the union. He tells the I-Team: “It’s the whole process of putting it together, it’s the glue, it’s the cleaner. You can smell how strong and powerful it is. There is none of these chemicals that says they are safe for you.”

In fact, the labels on the solvent cans clearly warn of the risk of exposure, telling users to “do not inhale fumes,” “known lung irritation,” and “suspected of causing cancer.”

Barry Keady has worked as a plumber for years and is now concerned about his recent medical tests revealing abnormalities in his liver. “It’s a long-term problem,” Keady said. “The chemicals go straight to your liver. PVC cleaner is like airplane glue. My liver function is turned off. You cut it with glue and detergent. It is a long-term health hazard for plumbers.”

Despite the plumbers’ union voicing health concerns about the product, the Plumbers and Gas Installers’ Examination Board has lifted restrictions on the use of the plastic pipe. Last month, it changed the state code to allow developers to use PVC in taller buildings and on non-residential floors.

Joe King tells WBZ, “You assume someone is watching us. Now we are going to make a code change and use PVC in every building. There’s no one to say, “I’m worried about the person installing the PVC pipe.” They worry about their bottom line, which is money.”

And it’s not just the plumbers’ union that is sounding the alarm about PVC. The EPA calls the toxic chemical vinyl chloride, which is used to make PVC, a known human carcinogen, and the Center for Environmental Health says there is no way to safely manufacture, use or dispose of PVC products.

At UMass Lowell’s Toxic Use Reduction Institute, researchers are working to develop safer alternatives to toxic chemicals and tell the I-Team that the plumbing industry already has safer alternatives. Cast iron and copper pipes have been used for hundreds of years.

Professor Ellenbecker says: “We can’t wait 30 years to see if this is a real problem, so in my opinion the lifetime risk of using iron pipes is much smaller than PVC.”

But the Plastic Pipe and Fitting Association says PVC products have been used for more than 50 years and are “safe, non-corrosive and economical.”

Ultimately, the plumbers’ union says it’s all about money.

For Joe King, it’s not a good trade-off. “They say it’s cheaper to install,” King said. “Which is cheaper in the long run my cancer disease or this piece of pipe?”

The I-Team has contacted the Plumbers and Gas Installers Examination Board, but they have not responded to our request for comment.

Firefighters are also concerned about the increasing use of PVC, claiming that the fumes from the molten pipes are toxic and pose a health risk.