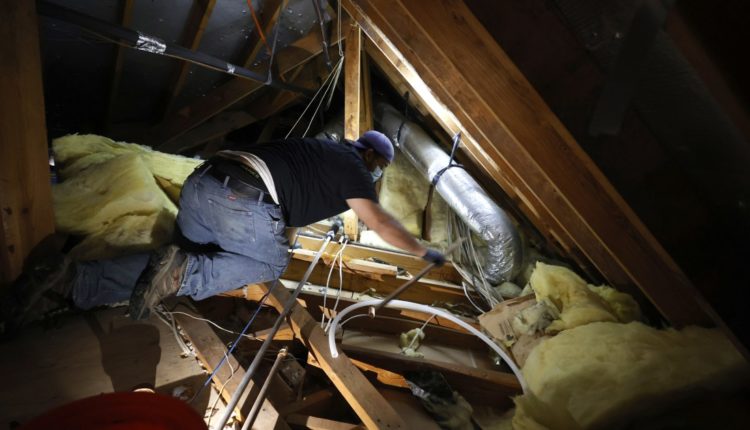 Plumbers from around the U.S. volunteer to aid a struggling Texas

Plumbers have begun to descend on Texas to volunteer to help the state as it struggles to recover from a grueling winter storm that left huge swaths of severe and long-lasting plumbing damage.

Texas became the center of an electricity and plumbing crisis when a record-shattering winter storm swept across the southern and central US in February. The state’s primary power grid couldn’t keep up with massive demand as Texans tried to heat their homes. To make matters worse, unseasoned homes and utilities were creaking below freezing temperatures. Pipe bursts and service interruptions due to the cold affected 14.4 million Texans at one point.

Two weeks later, some 200,000 Texans are under a boiling water alert and 207 counties are reporting problems with the public water system, the Texas Commission on Environmental Quality said in an email.

Paul Mitchell, 73, a plumber from Cedarville, Ohio, drove about 1,200 miles to help with the recovery in Austin.

Having never been to the city before, Mitchell is technically retired, but made the two and a half day trip with a trailer carrying $5,000 in supplies donated by his local Ohio community.

On Monday, he went to a trailer park in Austin, where he worked with volunteer plumbers from Kansas, California, New York and Georgia to help residents there restore the water.

“I had no idea I’d be under trailers,” Mitchell said, adding that he wasn’t sure what he would do, but he was on hand to help where needed. “They gave me the address and I went.”

Mitchell volunteered through Water Mission and Plumbers Without Borders, two groups hoping to make an impact with Texas recovery efforts.

Both groups are entering uncharted territory. Water Mission is a Christian organization that mostly works internationally in developing countries to help install water systems and give people access to clean drinking water.

Plumbers without Borders is a small operation, run by a husband and wife in Washington State, Domenico and Carm DiGregorio, committed to connecting volunteer licensed plumbers with organizations committed to improving access to safe water and sanitation. .

Seeing how overwhelmed the local plumbers were after the storm left a trail of busted pipes, they knew they had to do what they could to get as many plumbers as possible to Texas to help.

The DiGregorios posted the rally cry on their email list, and offers to help pour in almost immediately. They get volunteer offers from plumbers as far as Norway. The couple is working with Water Mission and local officials and unions in Texas to get volunteers to work, especially in the most needy areas.

“There’s no equipment down there,” Domenico DiGregorio said. Reports from Texas clearly indicate that this crisis will not end in weeks, but rather last for months. “We’re trying to find plumbers with trucks and tools and materials that can go down,” he said.

George Greene IV, president and CEO of Water Mission, said that although his organization mostly operates internationally, “when there is a need in the US, we look to see if there is a role for us.”

The need was clear this time. In conversations with plumbing companies in Texas, he learns that plumbers in the state have work orders estimated to take six months to complete.

“There is a huge need for specific skills with limited bandwidth based on what is currently available in Texas,” he said, calling it a “staff shortage.”

“There was a plumbing repair that took someone 15 minutes,” Greene said. “In those 15 minutes, they restored water flow to a house that hadn’t had water for two weeks.”

The city of Austin works with volunteers to help coordinate and provide shelter, and the groups pay for travel and repair costs, while the plumbers spend their time.

“In our culture, plumbers are not typically seen as people who are humanitarians,” said Carm DiGregorio. “Plumbers across the country are caring for those in need, and they want to share their time with those less fortunate and resource-poor.”

For Mitchell, it was a good idea to lend a helping hand. He and his wife both had Covid-19 and recovered in January, feeling safe traveling and knowing they were needed.

“I’m just grateful for the chance to serve other people,” he said on his way out early Tuesday morning, heading to another trailer park, ready to work.