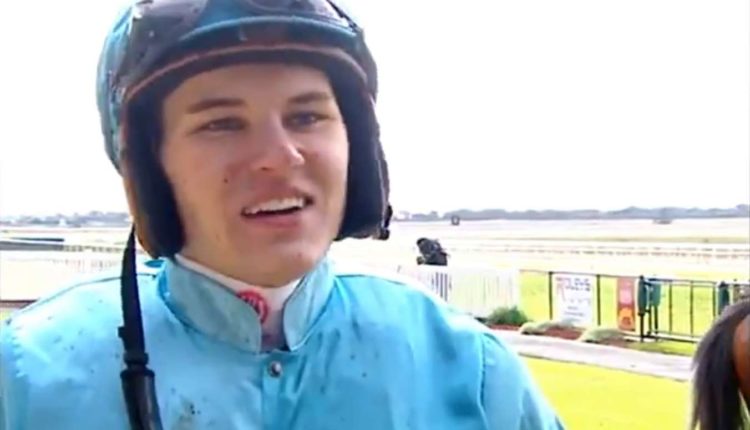 By SD News On Jun 23, 2021
Share
Darren McLeod had the dream debut of life in the saddle—driving a winner on his very first try.

But after swapping the plunger for the persuader, McLeod has breathed a new lease of life – and he’s already shown how capable he is with an impressive win on his debut.

McLeod’s first ride was in the Benchmark 120 Steeplechase over 3,360m, where he rode the Grant Young-trained Pentelligentsia ($4.40) to a 6.3-length success.

“Damned oath, I didn’t think it would happen so soon,” McLeod told Racing.com after the race.

“Words can’t even describe how happy I am, it’s been a long time in the making.

“If anyone knew the backstory, you wouldn’t think I’d be here so soon, or even here at all, so I’m very grateful to Grant for giving us the opportunity, and everyone else too.”

“Words can’t even describe how happy I am, it’s a long time in the making…”

This is what matters. Incredible start to Darren McLeod’s career as a jump jockey. @RacingSA 👏 pic.twitter.com/Xm4XDHEuYu

McLeod said he has a lot more confidence in the silk than in the overall.

On the winning feeling: “I wondered what that would feel like, and it felt better!”

Darren McLeod rides home the winner in his first-ever race as a jump jockey. 👏

Earlier on RSN 927, McLeod explained that he wanted to be a jockey from a young age, except that his height (181cm) was one of the reasons he was advised to stay away.

Not too long ago, his weight was around 80kg, but on Wednesday he rolled up Murray Bridge at 66kg.

“I was a normal dude, went to the pub, had a few pots and a parma, lived my best life… once I had the idea, I got it in my head and worked hard on it,” said McLeod .

For McLeod, that hard work has already paid off and his post-race excitement was there for all to see.

Recurrent Energy will install 2.3 GWh of energy storage in California over next year