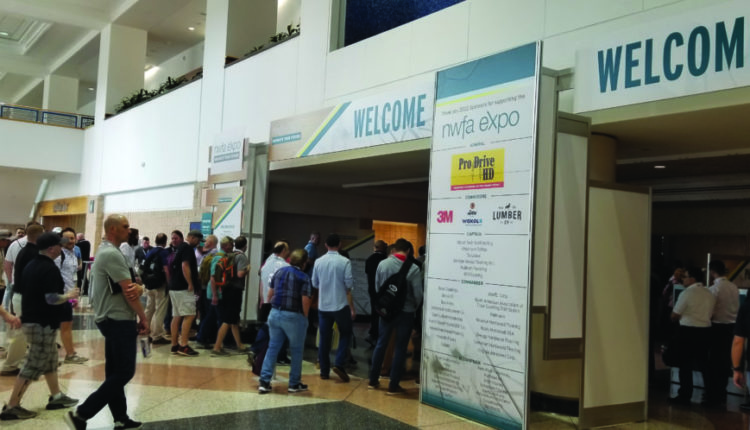 By Reginald Tucker—Tampa, Fla.—Proof that the North American hardwood flooring industry is not only surviving but thriving in the face of immense change was readily evident at the 36th National Wood Flooring Association (NWFA Expo 2022) convention held here last month. Attendance among professional wood flooring contractors was robust; exhibitors reported brisk activity on the showroom floor; and NWFA management cited optimism among its members.

“I don’t think the event could have been any more successful,” Michael Martin, president and CEO of NWFA, told FCNews at the conclusion of the second day of the event. “The last time we were in Tampa [2018] was the last time we had a full expo before COVID-19 hit. This is the biggest show we’ve had in over a decade.”

Craig Dupra, outgoing NWFA chairman, competed. “Attendance at this year’s expo is on par with expo attendance prior to the COVID-19 pandemic,” he said in his opening remarks to attendees during the general sessions. “That means we’re back on the path to normalcy.”

NWFA estimated this year’s attendance between 3,200 and 3,300—just 10% off from the 2019 show in Fort Worth, according to Martin. Exhibitor representation also improved this year, with more than 200 vendors occupying the show floor. While certainly not a record, it marked a significant improvement over 2021, when NWFA co-located with the Coverings show in Orlando. Exhibitor participation for that event was off about 30% compared to 2019, according to NWFA.

Early pre-registration activity also set the stage for a well-attended convention. In the weeks leading up the event, pre-registration was already up 10% over 2021. Likewise, on-site sign-ups also saw a boost. “With everything going on these days—supply chain disruptions, COVID-19, etc.—people often make decisions to attend events at the last minute,” Martin explained. “On-site registration was really strong.”

Another noteworthy difference between this year’s event and last year’s was the international contingent. This year’s show, for example, saw the return of more Canadian companies. Attendees from other producing countries also participated. “International attendance has definitely gone up from last year,” Martin said, citing one notable exception—China. “Obviously, things are happening in China that kept some attendees away. There’s so many shutdowns happening now and COVID-19 has seen, yet again, a resurgence there. We usually have 43 countries represented, and I would say that we’re probably at 32 countries this year. So, we’re starting to see that come back.”

Case in point is AHF Products, which has dramatically increased its presence at the NWFA convention since its spinoff from Armstrong Flooring several years ago. “This is the second year in a row that we’ve been to NWFA,” said Chris King, senior vice president of sales and marketing at AHF. “We were very pleased last year as far as the overall turnout and support. Now we’re back better than ever. And what we’ve seen out of the gate has been encouraging.”

Other exhibitors reported similar experiences. “We saw some good traffic, especially the first day,” said Wade Bondrowski, director of sales USA, Mercier Wood Flooring. Ditto for Dan Natkin, CEO of Bauwerk/Boen Floor. “This is an important market for Boen,” he said. “These are hardcore wood people, which is our target audience.”

Traffic was also brisk at the Indusparquet space, where the company showcased its offerings to both existing customers and potential distributor partners. “Our retail and distribution partners are reaching out to us, telling us they are seeing increased demand for our products,” said Jodie Doyle, vice president of sales and marketing at Indusparquet.

But sheer volume at the expo isn’t the only metric NWFA management and exhibitors employ in gauging success. The progress the industry has seen is also evident in the continued interest that retailers, contractors and distributors are showing in support of the wood flooring category.

“We’ve never had so many retailers reach out to us to have their sales personnel go through our online NWFA sales certification,” Martin said. “Smart retailers are recognizing that their salespeople need more tools to help them sell more wood.”

Amid all the optimism and enthusiasm the wood flooring industry is feeling, new challenges are emerging. The 800-pound gorilla in the room—and the subject of many conversations on the show floor at NWFA—is the war in Ukraine and the subsequent impact on Baltic birch and plywood shipments out of the region. Russian birch is commonly used as the core material in many engineered hardwood flooring products.

According to the NWFA, Russia was the third-largest source of hardwood/plywood imports last year, representing a total volume of more than 567 million square feet, which equates to about $334 million. Combined, Russia and Ukraine are the largest exporters of hardwood in the world. However, as a result of the conflict, both have effectively been removed from the supply chain. This occurrence has only further exacerbated supply chain disruptions originally caused by the pandemic.

“This latest war has caused issues with Baltic birch plywood, which is affecting the availability and price for the high-end producers of engineered flooring around the world—especially in the US,” said Paul Stringer, vice president of sales and marketing at Somerset Hardwood Flooring. “We, like other manufacturers that use Baltic birch, are scrambling to find alternative cores.”

Not all suppliers, however, are in the same boat. Boen, for instance, sources mainly from Europe but not Russia. “We have three manufacturing plants—one in Lithuania, Croatia and Switzerland—with about 70% of our production out of Lithuania,” Natkin explained. “We are in a unique situation because we construct the cores for all the products we sell in the US market. We cut the center plies ourselves, along with the back plies and the face. Everything we do on the back and center is spruce, which, despite pricing, is a fairly plentiful resource. We don’t have an issue with the Baltic birch plywood.”

At one time, Boen operated a sawmill in Russia, but it made the decision to suspend operations there. “That cut our capacity down a little bit,” Natkin said. “The other challenge is, while we didn’t source lumber in Ukraine, a lot of our competitors did. You can’t get that lumber now, so they’re all rushing to Poland and elsewhere—places where we get our supply—and it’s driving up the prices. Most of the domestic manufacturers that use it are sitting on three and a half to five months of supply; come mid-summer it’s going to be an issue.”

Domestic suppliers like AHF Products are also shielded from the predicament facing other companies that previously relied on Baltic birch. “One of the advantages we have with our supply chain is we don’t have exposure to Russian birch,” said Brian Carson, president and CEO. “We use a lot of HDF core for our engineered products, and in the US we make our cores out of American woods. Our customers, dealers and distributors are going to have a heck of a change this year with the plywood situation. Fortunately, that’s not an issue for us right now.”

Another supplier leveraging its domestic production capacity is Harris Wood, a division of QEP. The company operates a 250,000-square-foot production facility in Johnson City, Tenn., and it sources its raw materials locally, according to Renee Tester, vice president of marketing, e-commerce and digital. “All our Harris products are 5-ply and feature a back-balanced construction—oak or maple on the back and face of the product for greater dimensional stability.”

Barring the worst-case scenario in which other nations—including the US—could be drawn deeper into the conflict in Europe, the outlook for the wood flooring market remains favorable. “I think the wood industry is in for a hell of a run over the next three or four years,” AHF Products’ Carson said. “Both solid and engineered wood grew nicely last year, and we expect that to continue throughout 2022. Given the single-family remodeling that’s going on in the US, we’re seeing high home equity values. You can’t buy enough new homes right now, so contractors are remodeling existing homes—and that’s the power alley for hardwood.”

Research compiled by the NWFA paints a similar outcome for 2022. “While uncertainty abounds, I’m pleased to report that business, even though it may be a bit slower for some of us, is thriving throughout the entire wood flooring supply chain,” Martin stated. He cited a recent NWFA member report, which showed members expect sales to be up this year. “After several years of losing share to wood-look products, wood flooring is gaining share. Solid wood floors saw a 20% increase in 2021 and ended the year with the highest share rate since 2007. This year, we expect wood to grow about 14%. There’s never been a better time to grow market share for real wood flooring.”

Made in USA: Manufacturers ramp up domestic production