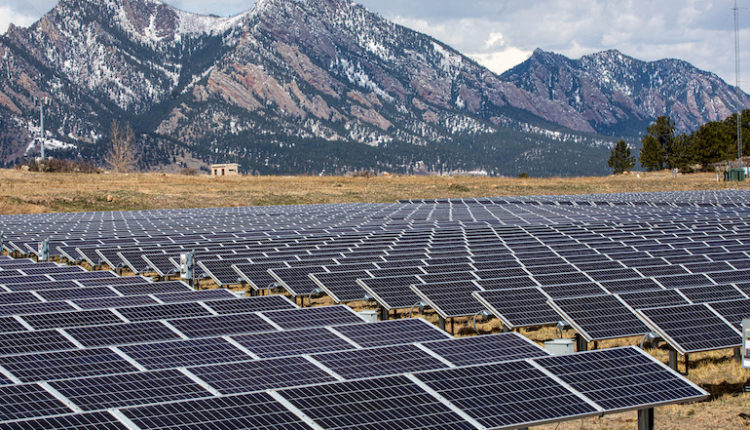 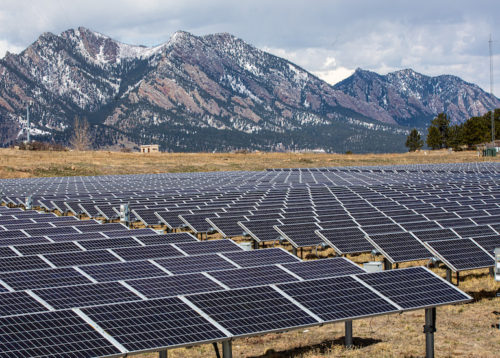 The 1-MW photovoltaic array on the Flatirons Campus (FC) of the National Renewable Energy Laboratory (NREL) has a backdrop of the Rocky Mountain foothills. (Photo by Werner Slocum/NREL)

Incorporating energy efficiency measures could reduce the amount of storage needed to fully power the country’s buildings with renewable energy, according to an analysis conducted by researchers at the U.S. Department of Energy’s National Renewable Energy Laboratory (NREL) ( DO).

As more communities plan to eventually rely on 100% renewable energy, the researchers offer a strategy that could lead their way — one that shifts away from long-term storage.

“Minimizing long-term storage is an important element in achieving the goal in a cost-effective manner,” said Sammy Houssainy, co-author with William Livingood of a new paper outlining a 100% renewable energy approach. The research paper, “Optimal Strategies for a Cost-Effective and Reliable 100% Renewable Electrical Grid,” appears in the Journal of Renewable and Sustainable Energy.

The researchers considered solar and wind to be the source of renewable energy, as most plans to reach the 100% target take this into account. They also used the Department of Energy’s EnergyPlus and OpenStudio building energy modeling tools to simulate energy demand, considering factors such as building size, age, and type of occupancy. Data from the US Energy Information Administration informed the scientists about the existing characteristics of the building stock and the energy load used by the buildings.

The researchers further divided the country into five climate zones, ranging from hot and humid (Tampa, Florida) to very cold (International Falls, Minnesota). The other zones include the cities of New York, El Paso, and Denver. By knowing the extreme demand for heating and cooling in each zone, the researchers were able to select the right mix of renewable energy sources to minimize the required storage.

Although different definitions exist in the literature, for the purposes of this study, the researchers define long-term storage as energy storage systems that meet electricity demand for a duration of more than 48 hours. Therefore, long-term energy storage provides power for days or months after the electricity is generated. However, most long-term storage technologies are immature or not widely available. The two NREL researchers calculated that achieving the final 75% to 100% renewable energy would lead to significant cost increases associated with long-term energy storage. Rather than focusing on storage, the researchers emphasized the optimal mix of renewable resources, oversized generation capacities and investments in energy efficiency. The researchers note that multiple routes exist to achieve 100% renewables and, as the costs and performance of technologies change, new routes will emerge, but they have identified an important route that is feasible today.

They also found that oversizing renewable capacities by a factor of 1.4 to 3.2 and aiming for 52% to 68% energy savings through energy efficiency measures for buildings lead to cost-optimal paths depending on the region of the country. Houssainy said making homes and offices more energy efficient reduces the amount of renewable resources needed, reduces the amount of storage and lowers transmission costs, ultimately supporting the implementation of a zero-carbon energy system.

“What’s in the document is really a multi-step process,” Livingood said. “That process applies to large cities, but also to small towns. Now the end result will change from city to city as this multi-step process is followed to achieve the cost optimal target.”

Tampa, for example, would generate all of its electricity from solar panels, while International Falls would get 100% from wind turbines, the researchers calculated, to rely as little on storage as possible.

“It is not intended to replace the need for site-specific, detailed engineering design and planning processes for buildings, power grid and energy infrastructure,” Livingood said, “but we believe that our new calculation method provides overarching concepts and conclusions that can be widely used. lines relevant and applicable. To cost-effectively realize 100% renewable scenarios, our newly developed calculation methodology provides general principles that help guide these detailed engineering design and planning processes.”