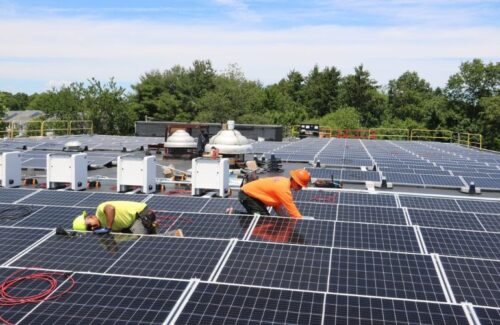 Sunrise installs an array on the roof of Westbury Middle School.

The commercial-scale solar market can be competitive, but finding a niche puts companies on a fast track to success. One Top Solar Contractor has spent years honing the skills to specialize in the growing school solar system industry.

Sunrise Power Solutions (No. 93 on the 2022 Best Solar Contractors List) had experience working with schools as an electrician, so when the company added solar power to its tool belt about 12 years ago, it already had an advantage.

At the time, many school districts received grants to purchase small 10 kW systems that served as science experiments for students. Sunrise didn’t shy away from these tiny projects, but saw them as opportunities.

“After doing a few, it just got bigger and bigger every year to the point where we are today,” said Stephen Foley, director of business development at Sunrise.

Now the company calls itself the largest school solar installer in New York. However, these solar projects are very different from other commercial scale projects, starting with the sales process.

“It’s a lot more complicated than with any other solar installation. When you’re dealing with the school district, there’s a lot of stakeholders,” Foley said.

Rather than collaborating with a few business leaders, as with other C&I-scale projects, solar installations in schools require the buy-in of numerous government officials — as well as the general public if the project requires taxpayer funding. . Licensing can also be more complicated, as companies must obtain permission from the New York State Department of Education to do any work on a school building. 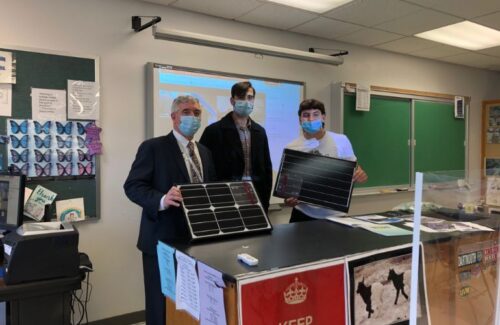 “It’s not something anyone can just jump into and do for that reason,” Foley said. “It literally takes years to do, from the moment you start developing a project to going through the entire approval process.”

When Sunrise works with a new school, Foley first speaks with the district superintendent and other assistant administrators. His master’s degree in educational leadership and certification as a school company officer makes this part easier.

But the administration is not the end of the line. The school board should also be involved in the process.

“If the administration thinks it’s a great idea, they can’t just do something themselves, they have to present it to their school board and the school board has to vote on it,” Foley said.

Sunrise often helps prepare solar project presentations for school board meetings and is available to answer questions from the board or the public.

Foley’s experience is that school administrators are hesitant to vote for something that costs taxpayers money and seems risky to them. For that reason, energy service performance contracts (ESPCs) have become crucial for the growth of solar energy in schools. ESPCs are comprehensive contracts between an energy service company (ESCO) and a facility owner. ESCOs will monitor the entire school’s energy and then purchase efficiency measures such as LED lighting and solar installations under one contract.

These contracts are often funded through existing school maintenance budgets or bonds and always include performance guarantees. If a solar project underperforms, the ESCO pays the difference out of its own pocket.

Foley said most schools today purchase solar installations through ESPCs. Other schools may have access to municipal grants or discounts.

“We’re using all of those factors to make it more affordable for schools to turn on solar power. We are always looking for opportunities,” he says.

Once a school has found the funding and decides to start using solar energy, the challenges don’t end. Prioritizing children’s safety and working around school schedules complicates construction.

“We have years of experience working in schools, we know how important it is to work with the right etiquette. It’s not a typical construction work environment,” says Foley. “You need to have a project manager who is in touch with the school district facility director and is aware of everything that is going on.”

When the installers are ready to connect the solar project to the grid, they sometimes have to switch off the power to the entire school. That means they need to plan carefully for a time when class isn’t going on and after-school activities aren’t happening.

Another common roadblock to solar energy in schools is project logistics. School roofs are often old and cannot be considered structurally suitable for ballast blocks and solar panels. Sunrise has learned to be creative in those situations and offers custom carport designs instead.

“We can take a look at parking lots or even field areas where we can put a ground-mount or canopy system over walkways,” he said.

While the extra work required at all stages of solar installation in schools can be overwhelming, dedication to this growing industry has paid off. Sunrise power solutions.