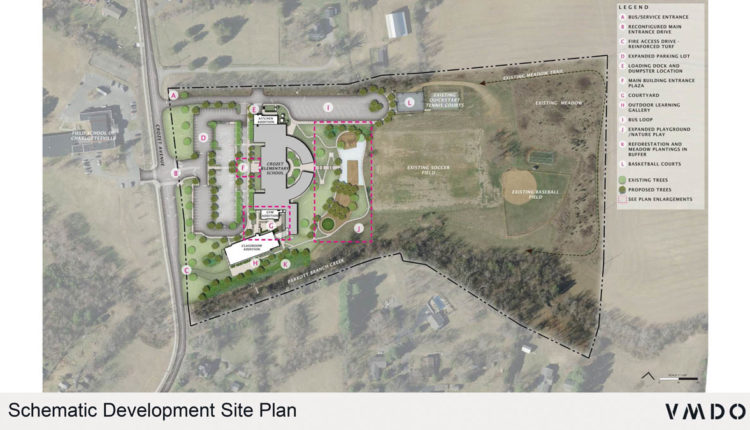 The Crozet Elementary expansion project took its first steps in March when two test wells were drilled on the north side of the school grounds in preparation for a new ground-based geothermal HVAC system. Data from the 550-foot deep test wells was used to inform contractors bidding on the project and also to adjust design details as needed. Matt Wertman, senior project manager for the county, said this will be the first geothermal HVAC system in a county facility.

“Geothermal systems use the Earth’s temperature for heat exchanges [i.e. heating and cooling] since the Earth’s inner temperature is always constant, ”said Wertman. “A heat pump pumps water through long circuits of underground pipes that then transport heat from the ambient air in the building to the ground and vice versa.”

“The tests were conducted over a 48-hour period after the wells were drilled,” said Wertman. “The testing went well and the results are used to determine whether the size of the pit field should be increased or decreased. We have just received the final test results and are still analyzing them to make this decision. The test wells, which have been drilled in the area currently serving the parent pickup and gravel parking lot, will not be lost. They will be used as part of the final well field when completed, all under the planned new bus loop.

“The geothermal system will cover much of the [campus]Wertman says, including the new addition to the classroom, the new kitchen and most of the existing classrooms at the back of the school. Much of the original building’s central core, such as the offices, library and cafeteria, will still use existing HVAC systems. “Many of the rooftop units serving these spaces have been replaced in the last five years and still have a useful life.

“A geothermal system has a higher initial cost than other HVAC systems, but the annual operating costs are much lower,” said Wertman. “Much of the initial cost was offset by the fact that we did not have to upgrade the current system to allow for higher energy consumption.” He estimates that, combined with savings from other design features, such as the type of building envelope and window glazing used, the county projects savings of about $ 42,000 per year when compared to current building systems.

“In addition,” says Wertman, “the expected life of a closed loop system, such as the one designed for Crozet Elementary, is 50 years, while other comparable systems have an estimated life of 25 years. This in turn reduces the maintenance costs of the system. For Crozet, our conservative estimates showed total operational savings of $ 2.2 million over a 25-year period, with return on investment around 7 years. “

The expansion project will also replace the school’s current underground fuel oil tank, which serves the building’s water boilers, with new heat pump boilers connected in the geothermal well field. “A temporary fuel oil tank will be used during construction so that the old fuel tank can be removed to make way for the new kitchen on the north side of the site. The new closed-loop geothermal system allows us to remove all of the school’s combustion equipment without using expensive electric boilers, which can use large amounts of electricity. “

Heat from the earth is transferred through the geothermal loop and then used to heat water for the sinks and kitchen through these units. It is important to note that this system is a closed loop system, which means that when installation is complete, the only exchange between the loop and the ground is energy in the form of heat. No water is taken from the ground or injected into the ground.

The County is excited about this opportunity as it ties in well with the County’s Climate Action Plan, adopted by the Board of Supervisors last October, by helping to reduce fossil fuel consumption in county facilities.

The school extension project also includes other sustainability features. “I will also add that the new addition to the classroom is designed to be solar ready,” said Wertman. “It won’t feature new photovoltaic panels because we knew we couldn’t fit them in the budget, but the addition will accommodate them when funding becomes available.”

Work on the project is expected to start on time. “The design team was very pleased with the low offer received and a Notice of Intent to Award was placed for Nielsen Builders, Inc. of Harrisonburg,” said Wertman. “Construction is expected to start in May. One of our first priorities in issuing a Notice to Proceed will be to begin drilling the remaining wells for the geothermal HVAC system. “