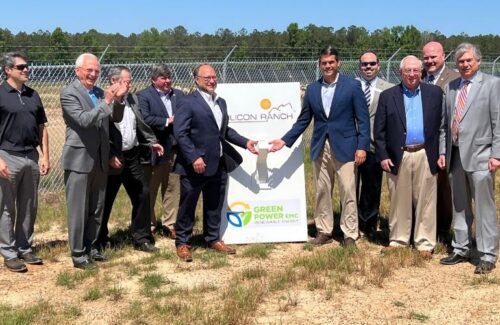 Green Power EMC, the renewable energy provider to 38 Georgia Electric Membership Corporations (EMCs), and Silicon Ranch were joined today by elected officials and leaders from Houston County to inaugurate the new 68-MW.AC Houston Solar project near Perry, Georgia. The Houston Solar location, just off I-75, is one of the most visible solar projects in the state and showcases how Georgia’s electrical cooperatives are working together to meet the renewable energy demand of the residents and businesses of the state. Georgia.

The project marks the clean energy generation of the seventh utility-scale solar facility brought online by partners Green Power EMC and Silicon Ranch. The energy generated by the Houston Solar project is shared by 30 EMCs from across the state and will provide enough cheap, renewable energy to power 11,000 EMC households annually. By working together, Georgia’s EMCs benefit from economies of scale, resulting in cheaper solar energy savings that are passed on to their member consumers. Their partnership through this unique model has enabled the EMCs of Georgia to strengthen their role as the national leader of all U.S. power cooperatives in utility-scale solar development.

“The Houston Solar project further demonstrates Georgia’s EMCs’ commitment to providing their consumers with cost-effective renewable energy that strives to meet the needs of a cleaner energy future,” said Lieutenant Governor Geoff Duncan. “This site uses advanced technology to maximize clean energy production, and the benefits are multiplied by creating jobs, boosting economic development and providing significant tax revenues to local government and the school system for decades to come.” .”

The project was commissioned on schedule after it was first announced in November 2020 by Governor Brian Kemp, who praised the partnership between Green Power EMC and Silicon Ranch for their role in supporting economic development across the state.

Following the dedication ceremony, attendees had the opportunity to tour the facility and see firsthand how Silicon Ranch co-locates regenerative farming practices on the same site where it generates renewable energy. Through the company’s Regenerative Energy platform, Silicon Ranch ranchers will deploy hundreds of sheep to enrich the soil and restore the land to a functioning grassland ecosystem.

“The model that Silicon Ranch has implemented here, where large herds of sheep manage the land and vegetation under the solar panels, is the future of responsible solar energy development in the US, and that future has begun in Georgia,” the commissioner said. from Georgia. Agriculture Gary Black. “This innovative renewable energy project is keeping the country productive, creating new high-paying jobs for our rural workforce and putting Georgia’s agriculture in the spotlight of innovation on the national stage.”

Under the terms of the 30-year agreement with Silicon Ranch, Green Power EMC will purchase all energy and environmental assets generated by the site on behalf of its member EMCs, while Silicon Ranch owns and operates the facility.