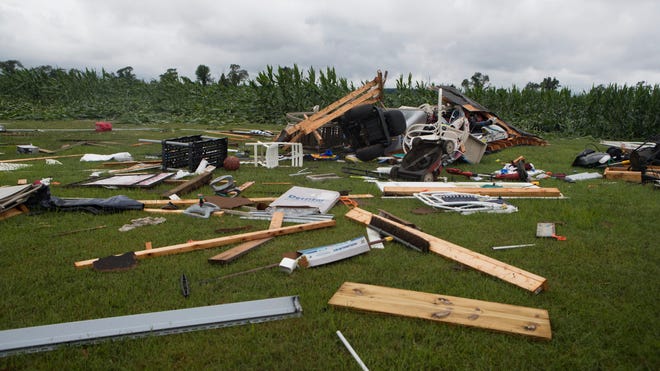 After surveying damage from a Thursday storm system that felled trees and damaged homes around Harrington and Milford, the National Weather Service said late Friday that two tornadoes hit the area.

NWS confirmed the first tornado in the afternoon Friday as officials were still assessing the area. That one started in the area of Farmington, south of Harrington. The weather service confirmed a second tornado touched down east of Milford.

Neither tornado caused any injuries, NWS said. Both were EF1 tornadoes, which bring wind speeds of 86 to 110 mph.

The tornado that started near Farmington had estimated peak winds of 90 mph. It started at 4:52 p.m. was about 50 yards wide. It traveled less than four miles, finishing near Houston about three minutes later, NWS said.

The tornado was caused after “an embedded severe thunderstorm interacted with a sea breeze and remnant outflow boundary,” according to the weather service.

Heather Haneline, who lives south of Harrington, said Thursday she saw two storm systems colliding and some clouds swirling near her home.

She said she normally sees some interesting skies in her area as storms roll through, but had “never quite seen a swirl like this.”

Story continues below the photo gallery. 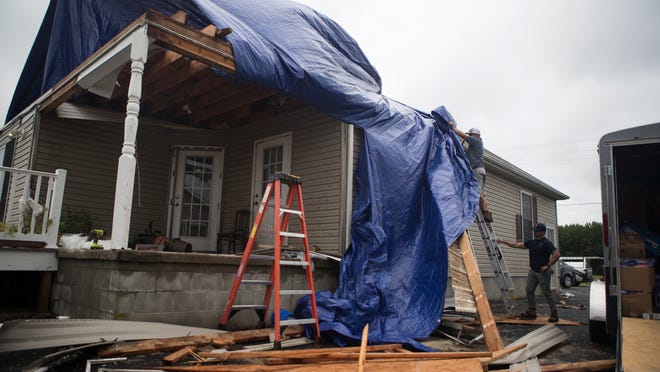 The tornado knocked down and snapped several trees in a narrow swath after touching down near a residence in Farmington. The tornado then moved over railroad tracks and a cornfield before ripping metal roofing off of a business as it trekked toward S. Dupont Highway. It later knocked a tree into a home along Hogtown Road and downed power lines along Hunting Quarter Road, NWS said. The tornado weakened and lifted just west of Deep Grass Lane near Houston.

Five minutes later, a second twister from the same system touched down east of Milford near residences at the intersection of Cedar Beach and McColley roads. It, too, carried estimated peak winds of 90 mph but was double the size of the earlier tornado at around 100 yards wide. It traveled nearly five miles and ended in Slaughter Beach.

The tornado felled several trees and uprooted a few. It uplifted part of a porch roof on Shockley Road, according to the weather service, and blew insulation across the road and onto nearby homes. Along the storm’s path, a large branch from a tree fell onto a shed and collapsed it. Fallen branches also caused damage to vehicles.

Residents in the area of Mils and Shockley roads on Friday were helping each other cut up downed trees, pick up debris and make repairs, although professionals were the ones working on a handful of significantly damaged roofs.

“It sounded like a train,” said Jordan Watson, took shelter with his family in his grandparents’ basement. “Next thing you know, it was over.”

East of Watson’s area, the tornado damaged barn roofs and caused two enclosed trailers to overturn near Fannies Way before the storm lifted near the coastline at Slaughter Beach.

The National Weather Service said all of the information in its Friday night report is preliminary and subject to change.

The storms mark consecutive years that two tornadoes touched down in Delaware in the same day. Last year, during Tropical Storm Isaias on August 4, three EF1 tornadoes hit Delaware. One was a record-breaking twister that tracked 29.2 miles from Sorghum Mill Road in Kent County to the Middletown area.

IN-DEPTH: The harrowing tales of when a record-breaking tornado touched down in Delaware

Another tornado touched down that same August day near Felton. The NWS later confirmed a third near Milford. 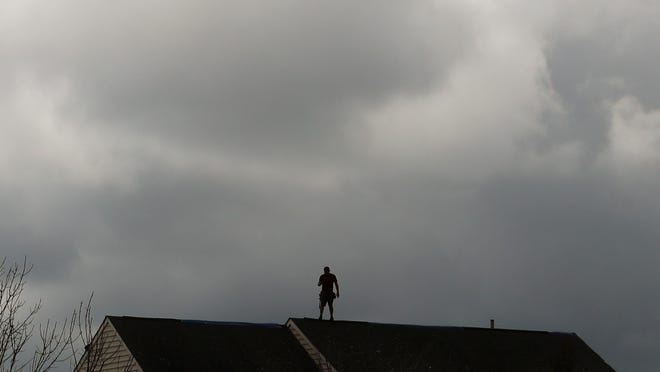 While the one August 2020 twister was the longest-tracking tornado in Delaware in 70 or more years, it wasn’t the biggest. In 2019, Laurel saw an EF2 tornado that had an estimated maximum wind speed of 120 mph and may have been up to 400 yards wide at one point.

Delaware typically averages about one tornado per year since the 1950s.