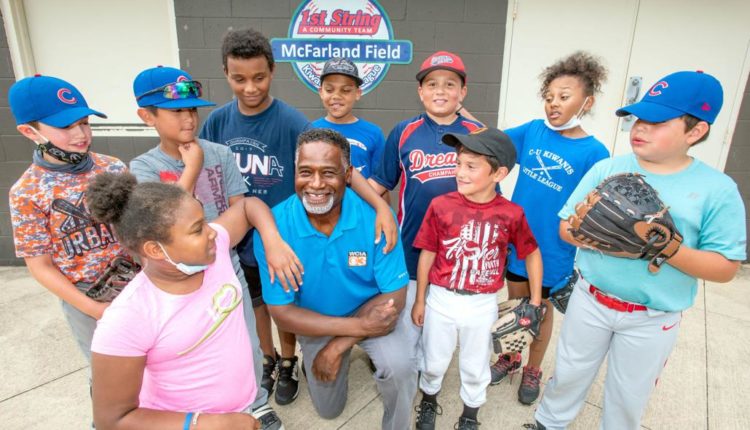 Peter McFarland likes working with his hands. That no doubt is what partly drew him to his two main interests of the last few decades — broadcast engineering and baseball.

McFarland officially retired Friday after 43 years as engineer at WCIA. It’s an industry that’s seen years of change. Baseball? Not so much, at least at the Little League level.

McFarland’s family has been so involved in the sport that a field was named after them. McFarland Field is home of the First String League, sponsored by the C-U Kiwanis Club, in Champaign.

“I enjoy it a great deal,” McFarland said of his baseball involvement. “It’s been really a good thing for myself and hopefully for the kids. I’ve met a lot of good kids. Some of them are grown now.”

Originally for children ages 6-17, the league in recent years has been for those 4-12 and includes tee-ball. A 13-year-old category was added this year, which he hopes will continue.

The family’s involvement started with his mother, Earline, who ran the concession stand for years. His father, Bob, attended many of the games. Peter continued the tradition and served as league commissioner for 28 years.

A petition drive started by Joe Omark led to the park district agreeing to name the field after the family.

“It was surprising and very exciting at the same time,” Peter said.

Randy Green, a former 10-year president of Kiwanis C-U Little League, said McFarland has been involved with Little League since Green was playing ball with his son, Brandon.

Whether it’s coaching kids or preparing the field or running the concession stand, the league volunteers do it all, he said.

Little League International recently recognized McFarland for his contribution, and Green was one of the people who nominated him.

McFarland said he will begin reducing his role and turn over his commissioner duties to Shawn “Bundy” Green.

He began his duties at WCIA in 1978. Studying “the technical part of communications” at Parkland College, one of his teachers was Ed Kelly, formerly of WCIA.

“He got me this job here,” McFarland said. “I’ll appreciate him always.

“I grew up thinking I wanted to be a counselor in school. That didn’t quite work out. I was going to school in business administration and didn’t like accounting” and decided to transfer into communications.

A lot has changed since those early days.

Paul Davis headed the newsroom, Dale Fleming was his first boss, and Augie Meyer was the owner.

“We had big, bulky equipment like tape machines. It was all videotape. Now it’s digitally recorded. The quality is a lot better. The cameras have been slimmed down so much that one person can handle most of the equipment.”

Despite the advances, equipment still had to be maintained and repaired. He kept up to date on the technology, but there is not as much preventative maintenance that has to be done as in years past.

WCIA Chief Engineer Darren Martin said McFarland has been his “right hand man” for many years.

“He’s been an outstanding employee, dependable and reliable,” Martin said, noting McFarland has been instrumental in a number of projects at the company, including maintaining the old tape machines that hold archival footage from the ‘70s through the ‘90s.

McFarland and his wife, Debarah, have two sons and a daughter.

With more free time, he wants to “do a little traveling,” and this winter will be involved in the park district basketball program. He also wants to umpire and referee games.

But it’s time to let someone else maintain the WCIA equipment and worry about baseball rainouts. McFarland has paid his dues.

Students get a taste of the trades

Area high school students learned a little of what goes into plumbing, pipefitting and HVAC repair, among other trades, during a series of visits to the UA Local 149 training facility in Savoy.

The students met with Local 149 Business Manager Matt Kelly, Journeyman Justin McMullin and Training Director Derek Reedy, who took time off to work with the students. They were introduced to several skills, including piping, electrical, carpentry, roofing, concrete and painting.

The students also spent time with union members at the University of Illinois’ Facility and Services plant as well as the fabrication shops and offices at A&R Mechanical.

This year’s visitors to Local 149 were:

Nevitt joined Champaign West Rotary in November 2013 and has received numerous Rotary awards ranging from Rookie of the Year to Rotarian of the Year. She assumed the title of club president July 1, 2020.

She serves as senior vice president and commercial compliance manager for Busey Bank.

Ramirez, a native of Bogota, Colombia, studied medicine at Jesuit University in Bogota and then worked as a physician in the jungle area of southeast Colombia for seven years. He came to the U.S. in 1979. He worked as a neonatologist in several neonatal intensive care units in Champaign-Urbana, Springfield and Chicago for 31 years. He is now retired.

Ramirez has been a member of the club for more than 10 years and has won several Rotary awards, including Rotarian of the Year, and is a Paul Harris Fellow.

Danville resident Victoria Omark has been selected for a three-month internship to work closely with the management team of Laughlin/Bullhead International Airport, Ariz.

The North Dakota University senior is working toward dual degrees in air traffic control and airport management. She earned her private pilots license two years ago.

“We’re excited to have somebody who is passionate and wants to learn,” LBIA Director Jeremy Keating said. “Victoria came out on top from more than 40 applications, which is really good.”

The LBIA program offers a paid internship opportunity to college juniors and seniors enrolled in aviation management programs. Tailored to benefit the student’s particular aviation interests, the internship also offers students the opportunity to shadow every aspect of airport management.

For 12 hours later this month, people will be running the track at Champaign’s McKinley Field to raise money for disadvantaged children.

The Champaign County Salvation Army has set a goal of 240 participants to help raise funds to underwrite the cost of a nine-week day camp program for area low-income and at-risk children ages 6-13 this summer.

Registration for both in-person participants and remote supporters is open online at www.Sal.Army.US/redkettlerun. Runners, walkers and even marchers who register for the event with a $24 donation will circle the track in two-hour time blocks.

Cooling stations with snacks and drinks will be available trackside throughout the day.

The summer day camp, which runs from June 7 through Aug. 6, affords children an opportunity for growth and self-development by helping them to build social skills, receive daily nutritional meals, participate and learn team sports, achieve goals in daily scheduled activities and have daily tutoring in math and reading.

ORCHESTRA TO PERFORM AT FISCHER THEATRE

The Danville Symphony Orchestra has entered into an agreement with the Fischer Theater for the symphony’s 2021-22 season.

The agreement includes hiring the theater staff for marketing and box office to full-service production management.

At least three of the symphony’s four full-orchestra concerts will take place in the Fischer Theater beginning with the Oct. 16 “Roaring Twenties” concert featuring the music of Cole Porter and Gershwin.

The orchestra will bring Broadway performers to the city to sing some of the songs.

Fischer Executive Director Jason Rome said he believes the alliance will mutually benefit both the theater and the symphony. He said the theater is an anchor in the community and the cornerstone to the city’s plans for rebuilding downtown Danville.

Don Marrow, president of the Vermilion Heritage Foundation Board, adds, “This partnership aligns perfectly with our mission statement to provide, through the Fischer Theater, a premier multi-purpose venue for the performing and visual arts, and to add to the economic development of the Danville area.”

More than 300 athletes and families from 11 states converged on Rantoul in hopes of ultimately representing the country on Team USA in international competition.

Rick Janor, regional director for USA Baseball’s Midwest Region, said selecting the Rantoul facility was an easy decision, “given the synthetic turf, quality of the facility, outstanding amenities” and service from the staff at the complex.

How Hiring a Professional Roofing Service Can Help with the Safety of the People? – Film Daily