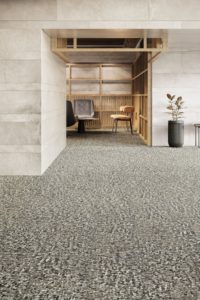 “Aiming to create a visually intriguing and richly textured collection, our design team focused their search for the museums’ collections on textiles, basketry, and pottery from the indigenous cultures of the U.S. Southwest and Mexico,” says Jackie Dettmar, vice chairman of the Mohawk Group. chairman of marketing, design and product development. “The resulting patterns of Vierd Erfgoed explore the aesthetic continuity within these craft traditions and their evolution from ancestral to modern.”

From the honeycomb structure of ceramics by the Pueblo peoples of the US Southwest, and the delicate intricacy of woven baskets by the Hupa people of Northern California, to the layered Bargello geometry of a 19th-century woven cloth from Mexico, these artistic motifs and techniques form a continuous line of communication between these cultures and their people, according to Mohawk.

“Celebrated Heritage is a testament to the ongoing interpretive work that empowers a culture to sustain a craft and a craft to sustain vital elements of a culture,” said Pamela Kelly, vice president of licensing and brand management for the Museum of New Mexico Foundation. “We hope specifiers choose Celebrationd Heritage for their next projects, and that the collection inspires creativity in their spaces.”

A portion of the proceeds from Celebrated Heritage support the Museum of International Folk Art and the Museum of Indian Arts & Culture in their mission to preserve and promote the artistic and craft traditions of the world’s artisans, according to the Mohawk Group.