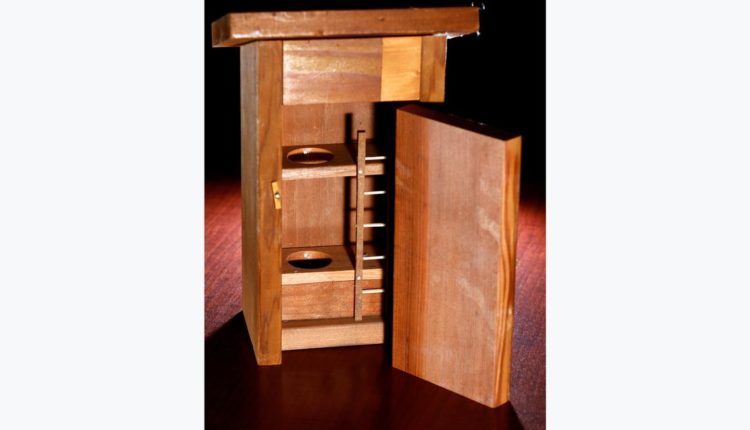 He calls it a “Swedish 2-holer” because one hole is directly below the other. He’s rushing to say he’s part Swedish (and part Norwegian), so he hopes Swedes won’t take offense at this.

“I’m 50,” he writes, “and I still remember very well using my grandparents’ outhouse.”

“Several years ago,” he writes, “we were hunting deer. We happened to have a girl from Bemidji with us.

We passed the house of an elderly bachelor. He had no interior pipes, but he had an old cabin as an outbuilding.

Well, the girl who was with us had to go.

She thought the place was empty.

Everyone said she should just use the annex, and she agreed.

“How could we know that the outbuilding was currently occupied by the old bachelor?

She swung open the old door. All we heard was a loud scream when she realized someone was inside! I think it really scared her and maybe the old man too!

“We still laugh about that years later!”

Darald Paulson put together this miniature outhouse and sent it to Bob Lind to view it. David Samson / The Forum

“I grew up on a small farm in southeastern North Dakota. We had no sanitary facilities until we left, ”she writes, then shares a piece of her family history.

“We went to church in Rutland, ND, 7 miles away, and to school in Havana, ND, 5 miles away,” she writes.

She used the car and combined it as collateral to borrow money from the bank. She borrowed a similar amount from my uncle.

“She and I drove the 90 miles to Fargo and she bought a house. Ten days later we went back to Fargo and she got a job as a special diet cook at St. Luke’s Hospital for $ 150 a month. She then stayed with friends in Fargo, because she had to go to work immediately.

“My older brothers were both hired on the neighbor’s farms, so I was at home with two sisters aged 12 and 8. I was 16 and had the responsibility to take care of my sisters, packing the house to move so many chickens and to slaughter if I could eat after moving to the big city.

“I started the month after moving to 11th grade, from a class of 12 students to a class of 600 at Fargo Central High School.

“We also had $ 100 a month from Social Security to help with expenses.

“On the farm, we raised and canned everything we ate, and raised our own meat. Now it all had to be bought. Fortunately, the hospital allowed Mum to take home food scraps. Few people know how many different ways you can prepare leftover mashed potatoes!

“Our first outbuilding,” continues Annette, “was a two-holer, made of aged wood that had never seen paint, with the door facing the kitchen window. We kids always left the door open!

Mother hated seeing this view when she looked out the kitchen window. So when a wind storm came and blew down the outbuilding, she was delighted.

There was an outbuilding for sale from someone in Rutland who no longer needed it. What a great model! It had a cement floor instead of a wooden floor like the old one.

“We painted it white inside and out and it was out of sight of the kitchen window. Mom also made sure the door was facing away from the house!

“I have to admit that I really appreciated having indoor plumbing at the age of 16, and I still do.”

Annette adds a note about an old two-story house in Belle Plaine, Minnesota, with a walkway from the second floor to the top portion of an outbuilding.

“How wonderful it must have been to cover such a short distance at night!” she says.