The Solar Power World editorial team is proud to continue our Top Solar Champions awards program that began in 2021. These four awards, open to anyone employed by Top Solar Contractor companies, highlight talent in the industry in a variety of skill areas. 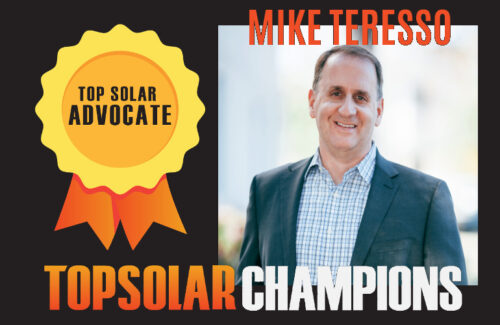 Since joining the company in 2013, Teresso has used his leadership position to advocate for positive solar policies at both the state and federal levels.

Teresso testified before the California Public Utilities Commission at the NEM 2.0 hearings in 2016 and has recently been a vocal supporter of Save California Solar’s campaign to correct the CPUC’s NEM 3.0 proposal. Teresso encourages its employees to get involved in these efforts, ensuring Baker is well represented at meetings and other advocacy events.

“His passion for renewable energy has positioned him as a respected opinion leader, active in solar energy policy and the driving force behind the industry’s future.” – Tina-Marie Neesen, Marketing Operations Manager, Baker Electric Home Energy

Teresso also wrote an op-ed against the original NEM 3.0 proposal for the San Diego Union Tribuneand appeared on local news channels about the implications of poor solar policies.

Nationally, Teresso traveled to Washington, DC in 2017 to testify before the U.S. International Trade Commission at the Section 201 solar tariff hearings.

State, local and national policies have a major impact on the solar energy markets in the United States, and leaders like Teresso are needed to ensure the industry’s growth.