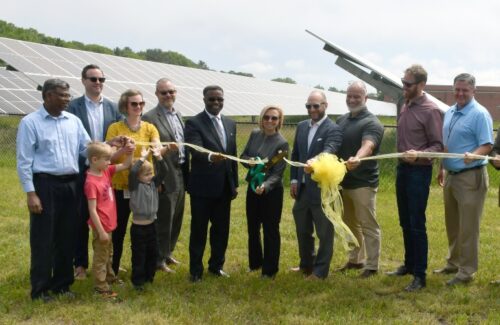 The Grand Rapids Water Department is expected to generate an estimated net savings of $1.55 million in energy costs over a 24-year period. The array will account for 10% of the LMFP’s electricity consumption and is expected to increase the city’s renewable energy performance from 37.5% to 41%

Grand Rapids is a regional supplier of drinking water to municipalities in Kent and Ottawa counties, serving a population of more than 300,000 by treating and pumping water from Lake Michigan into a 137 square mile service area. The LMFP used 17,236,501 kWh of electricity in 2020, which was 23% of all electricity used by Grand Rapids’ municipal operations.

“Today’s ribbon-cutting ceremony celebrates the partnership between CMS Energy and the city of Grand Rapids as we help lead the clean energy transformation in Michigan,” said Brian Rich, senior VP and chief customer officer at CMS Energy. “The new on-site solar power plant at the Lake Michigan Filtration Plant is another step forward for the city as it commits to using 100% renewable energy for its municipal operations, and CMS Energy is proud to play a role. play in helping to achieve this goal. †

In the late summer of 2020, the City, CMS Energy and ES Services began collaborating on innovative ways to install solar power on the 67-acre LMFP. In early October 2020, Alison Waske Sutter, the city’s sustainability and performance management officer, gave the city commission an overview of renewable energy performance and opportunities and advised the city to pursue a solar panel at the LMFP. On December 1, 2020, the city commission approved the city to enter into a solar equipment service contract with ES Services Company to build, own and operate a solar panel at the LMPF at an annual cost of $119,004 to the city water department. , which equals $2.86 million over the 24-year contract period.

The LMFP was identified as a potential solar site through a SolSmart analysis. The city commissioned ES Services Company to build the array. This fall, CMS Energy is coordinating the planting of a nearly 3 hectare pollinator field of native wildflowers.

News from the City of Grand Rapids