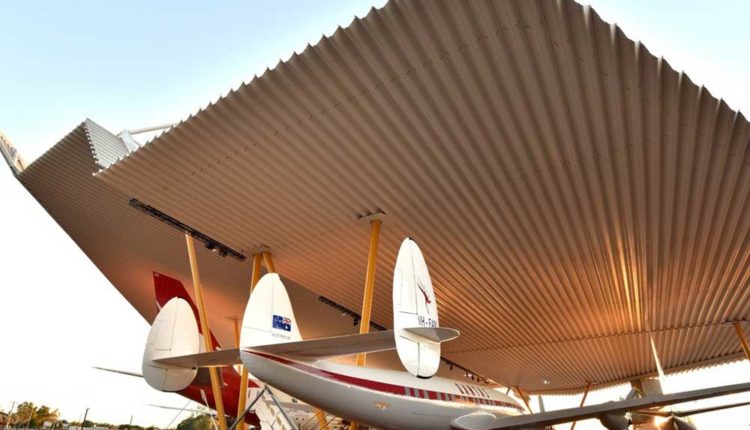 What could otherwise have been a straightforward roof structure turned out to be a particularly challenging project during the execution of the Qantas Founders Museum Airpark in Longreach, Queensland.

Longreach, ‘gate to the outback’ and home to the Stockman’s Hall of Fame, is probably best known as the birthplace of Qantas. The Qantas Founders Museum Airpark was completed in 2020 as part of the airline’s centenary celebrations.

Combining a memorable viewing experience with a spectacular light show, the museum was designed primarily as a roof to protect the iconic aircraft from the harsh elements of the Queensland Outback.

The assignment for The NRA Collaborative required the architects to design a roof that was not only weatherproof, but also architecturally outstanding as a major tribute to Qantas’ impact on the world of commercial aviation.

After the designs and plans were approved, the task of building the massive roof began. This was a complex process as none of the aircraft could be moved, requiring the Airpark to be built around it. Then Fielder’s ARAMAX came into the picture.

The NRA Collaborative approached Fielders because they loved the aesthetic of ARAMAX – the slim V-profile of the roofing material was exactly what the architects had in mind. However, their demands went beyond just appearance – to performance. The roof had to be strong enough to bridge large distances between structural supports, withstand gale-force winds, handle extreme downpours, and survive the outside sun for a certain lifespan. In addition, it also had to be easy to install, as the roof had to be built around the aircraft.

After three months of intensive designing, coordinating and solving solutions with the architects, structural engineers and steel frame manufacturers, the dimensions and tolerances were accurately calculated in a complex 3D model with absolutely no margin of error.

The first part of the construction consisted of building protective scaffolding around the aircraft, two of which were 747 Jumbos. Then the construction of the steel frame began. Once in place, the roofer’s job was to install 8,700 m² of ARAMAX over the area.

On a typical project, installation is a quick and relatively simple process, as ARAMAX is mounted by simply snapping it into place. The Qantas Founders Museum Airpark was a very different scenario. For starters, the roof was built under the steel frame to make it look more like a giant Meccano game – steel cleats had to be welded to the bottom flange of the support beams, and the ARAMAX substructure was winched over the immobile plane. This is impossible with a conventional roof system.

The other major difference from the roof structure was the drainage gutter, which is essentially a giant box gutter to quickly carry away the massive amount of rainwater that falls during an outback storm. Water is channeled through the gutter into a giant soaker pit, which empties into a sculptural drain on the asphalt below. Building the system was a demanding process – everything had to fit exactly.

The project was a huge success and rewarding too: the Qantas Founders Museum Airpark won the Queensland Steel Institute Award for Outstanding Design and was highly commended at the 2020 national Fielders Made Design Awards.

Soar to new heights with ARAMAX

ARAMAX is an excellent roofing material – strong, resilient and beautifully quick to install, enabling the construction of amazing structures such as the Qantas Founders Museum Airpark.

The Airpark project used 8700 m² 1.2 mm BMT aluminum ARAMAX roof system, with a span between the supports of approximately 10 meters, a cover width of 700 mm and a V-shaped profile 357 mm deep.

ARAMAX enhances the architectural value of any project, including commercial buildings and shelters, residential homes, stadiums, schools and now a roof to protect some of Australia’s iconic aircraft.

ARAMAX can be roll formed on site anywhere in the world, making it an accessible, time-saving and cost-effective construction product.