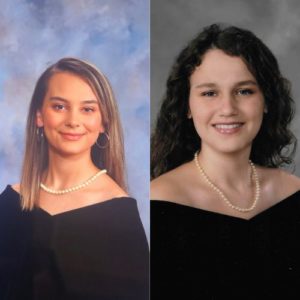 Salem, NJ – In recognition of the benefits higher education provides to both individuals and the communities in which they live, Mannington said it is a corporate sponsor of the National Merit Scholarship Corporation and the underwriter of scholarships for its employees’ children. According to the company, this year Mannington-sponsored special scholarships were awarded to two promising and talented high school students, Isabel Edwards and Chloe Silvers.

“There is nothing more valuable than a good education,” said Keith Campbell, chairman of the board of directors at Mannington Mills. “By investing in the future of these young people, we hope to help them achieve their potential more fully and contribute to the world in a meaningful way. All of us at Mannington wish Isabel and Chloe the best of luck.”

Edwards is a graduate of Model High School in Rome, Georgia. She said she plans to become a lawyer and attend the University of Georgia majoring in ethnic, minority cultural, gender and group studies. Edwards is the daughter of Amy and Michael Edwards, senior vice president of operations at Mannington Mills.

Silvers is a graduate of Adairsville High School in Adairsville, Georgia. She said she plans to become a veterinarian and attend Berry College, majoring in pre-veterinary studies. Silvers is the daughter of Wesley and Samantha Silvers, who is a strategic account project coordinator at Mannington Mills.

Since Mannington became a sponsor of the National Merit Scholarship Corporation in 2014, Mannington said it has awarded 16 scholarships and recipients have pursued majors in an impressive spectrum of academic disciplines ranging from physics, aeronautics and natural resource management to physical therapy and international relations.

According to the company, the National Merit Scholarship Corporation is a privately funded non-profit organization that has awarded college scholarships to thousands of top-performing students in the US since 1955.