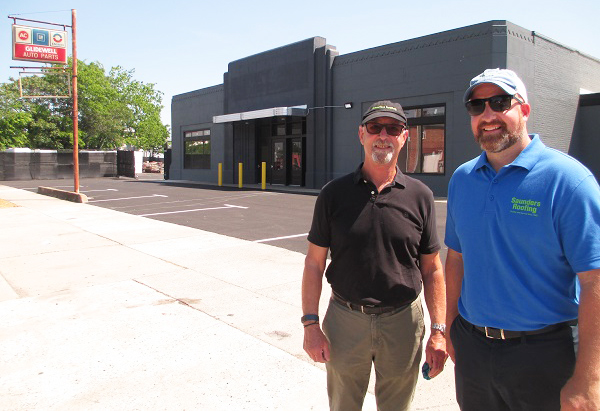 When Graham Aston was given the keys to the Art Deco building he’d been looking at for some time along Route 1 in Blackwell, he was confronted by what the former auto parts store had hidden from the outside: a collapsing, leaking roof.

Good thing he had a roofing business.

Paul Saunders Roofing Co., which has led Aston for about half of its nearly 80 years, is in the process of renovating the former Glidewell Auto Parts building at 129 Richmond Highway, relocating its headquarters in a century after three decades. old warehouse at 1801 W. Marshall St.

But Saunders’ move to his new home had been in the works since 2018, when it purchased the three-building Blackwell property for $ 570,000 through Emsea Holdings LLC.

The deal included three other packages in the same block on the corner of Decatur Street, with a separate ownership package dividing the assembly. The city recently estimated the four lots collectively at $ 723,000. Aston and Frakes in the front office. Frakes plans to acquire the company from Aston, who also took over from his father-in-law, founder Paul Saunders.

The following year, the company began restoring the buildings, including the main structure that it uses as an office. Two smaller buildings on either side of it, 127 and 131 Richmond Highway, will be let to other contractors or small office users.

The three-acre site at the newly renamed Stockton Street interchange on the highway dates back to the late 1930s and was once a convenience store, Aston said.

He had spotted the buildings while working in the area and worked with Ben Bruni of Commonwealth Commercial on the purchase. Bruni also handles the rental of the property.

Aston, whose English accent betrays his British roots, said the area along that stretch of Route 1 also appealed to him. While he said it has its challenges, he sees the neighborhood emerging with nearby developments on Cowardin and Semmes avenues to the north, and redevelopments of the former American Tobacco and Model Tobacco buildings to the south.

“This area is arriving so quickly,” Aston said. “It feels like a good place to be at the right time.”

But since its last days as an auto parts store, the former Glidewell structure had fallen into disrepair, forcing the company and subcontractors to work for two years to fix it. Bob McClendon of Chesterfield-based OGK Consulting was the project manager. The main building as it looked three years ago. (Thanks to Graham Aston)

“The building hadn’t been maintained for a long time,” Aston said, “so the roof collapsed, the tin ceilings rusted. It was full of auto parts and the roof had been leaking for years. But the outside was good. “

After a complete replacement of the roof, the company installed new ceiling tins for the front office of the building, which feature the company’s lime green logo. Six or seven of the 30 employees will work in the space, which, along with the rest of the buildings, was designed by Walter Parks Architects.

A warehouse space behind the office includes a tin-ceilinged storage area, adding to the outdoor storage areas that the company did not have at the previous location. Aston’s son-in-law, Jarrod Frakes, who will take over the business from Aston in about a year and a half, said they are in the process of moving their inventory with the aim of opening their doors there by June.

“We hope to be all the way here within this month. There is a lot to move, ”said Frakes. “We have been there for 30 years and we do a lot of historic roofing. There are a lot of slate and tile and specialty copper products that we have there, so moving that takes time. “

When Frakes takes over the company, it will carry on a kind of family tradition. Aston, who moved to the company from England in 1982, is himself the son-in-law of founder and namesake Paul Saunders, who died that year and was still active in the company. Saunders started the company in 1943.

In consultation with Sadler & Whitehead LLC, Aston would not disclose how much was spent on rehabilitating the buildings, which involved historical preservation tax credits.

The roof replacement included the entire roof system, with new trusses supporting new electrical, plumbing and mechanical configurations. New garage doors and windows have been installed in the buildings and the metal canopy of the main building has been restored and replaced. A coat of dark gray paint modernized the appearance of the building’s previously white facade. The inside of the 127 building, which is intended for a contractor office.

The main building is nearly 9,000 square feet in total, while the 127 and 131 buildings are approximately 1,800 and 2,800 square feet, respectively. Aston said the smaller self-contained building would be good for a contractor company, while the 131 building, which is adjacent to the larger structure, could house a variety of business types.

“We think it would be a small tech company or a small office,” he said of the 131 building closest to Stockton Street. He said they have received interest from several contractors in the buildings, which remain available.

“These buildings have much older charm,” Aston said. Of the main building, he added, “I am so glad we managed to preserve the structure, as not too many examples of this period of American architecture still exist.”