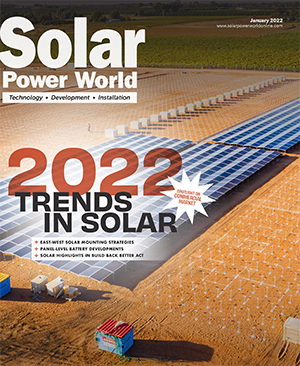 A new year with old challenges and new opportunities

This past year was one long lesson in resilience. We entered 2021 with many expectations of change, phasing out a president and bringing in another who promised monumental movement for green infrastructure. Mass distribution of COVID-19 vaccines set us on a track to combatting the virus, reopening our social lives and correcting massive supply chain issues that have wracked our industry and every other globally. Yet, we’ve reached this new year with those expectations swept out from under us.

Where does that leave us? For now, the answer is where the solar industry has always been: On our own.

Federal subsidies have certainly helped solar reach the scale that it has in the United States, but without the efforts of individual industry members — manufacturers and installers alike — we wouldn’t be consistently outpacing fossil fuels in new electrical output on the grid. Perhaps we’ll soon see passage of the Build Back Better Act — a necessary and long overdue effort to overhaul the country’s electricity makeup. But the solar industry has proved it can operate without major federal support.

In the last year, the industry has expanded its reach, optimizing established technologies, building symbiotic relationships with accessory technologies and enacting new policies at a smaller but still impactful scale.

State legislators are introducing policies that enable community solar programs, which will give people who cannot physically install solar on their homes the opportunity to participate. Domestic solar module manufacturing is expected to double within two years as more companies open new facilities in the United States. Fossil fuel infrastructure, like coal mining operations, is shuttering, and developers are finding solar arrays to be one plausible construction option for those sites.

Meanwhile, solar is playing a major role in decarbonizing transportation. It’s an established pairing, but many solar contractors are adding electric vehicle charger installation services. Solar retains untapped potential in this space and will play an integral role in another major decarbonization effort in the future. Green hydrogen is a nascent technology in the United States and projects here are still in the pilot phase. A hydrogen fuel cell produces only heat and water vapor when expanded, yet the electrified molecules can power vehicles, heavy machinery and infrastructure, and can act as energy storage, too.

Using renewable energy for green hydrogen production, which requires major amounts of electricity, is what makes it green. The BBB Act cites green hydrogen as a planned source for carbon-free energy. This is just one avenue of untapped potential for photovoltaic solar, in addition to everything else driving demand for solar installations. The BBB Act will undoubtedly spur major renewable energy developments in the United States and will be necessary for making it happen at scale when — or if — the legislation passes.

Regardless, solar will press forward. Demand for the technology remains at an all-time high, so with or without renewed federal subsidies, more solar will be installed. Solar is what’s trending.