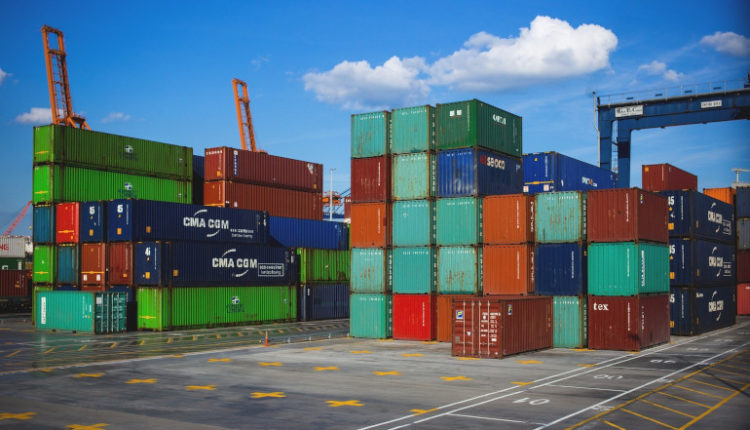 SEIA has released some early findings of its survey to solar companies after the Commerce Dept. decided to investigate allegations of tariff circumvention by solar panel manufacturers. Since the investigation decision just one week ago, 75% of survey respondents (200 companies) have said that solar panel deliveries have been canceled or delayed. 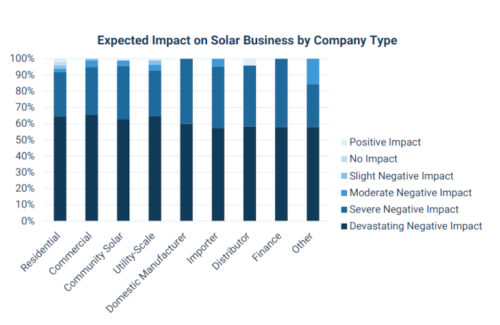 More than 90% of companies polled said that the DOC’s actions are having a severe or devastating impact on their bottom line. All market segments — residential, commercial, community solar and utility-scale solar — overwhelmingly reported devastating or severe impacts from the investigation.

“This investigation is based on a meritless trade case that is hammering the solar industry in real-time and diminishing our efforts as a country to tackle climate change,” said Abigail Ross Hopper, SEIA’s president and CEO. “We urge the administration to expedite this investigation and end this unnecessary roadblock to our clean energy future.”

Commerce initiated country-wide circumvention inquiries last week to determine if solar cells and modules exported from Cambodia, Malaysia, Thailand or Vietnam that use Chinese components are circumventing antidumping and countervailing duty (AD/CVD) orders on solar cells from China, which have been in affect since 2012. California solar panel assembler Auxin Solar petitioned Commerce to look into the potential circumvention. 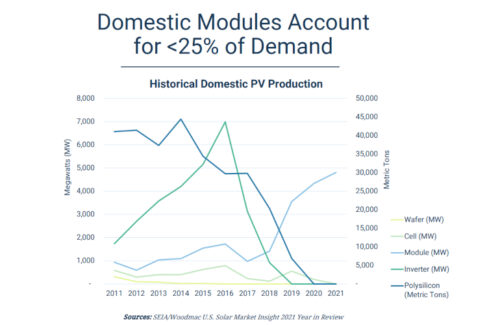 SEIA said that all domestic manufacturers that responded to the survey said this case will have a devastating or severe effect on their ability to operate. Domestic panel manufacturers still need to import solar cells, which are likely to have Chinese polysilicon. Two-thirds of the companies surveyed reported that half of their workforce was at risk and one-third of companies said their entire workforce was at risk.

The results of this SEIA survey come as the industry experiences unprecedented supply chain challenges and price increases. In 2021, solar equipment costs increased by 18% and the threat of previous trade actions caused project delays and cancellations, according to a report released by SEIA and Wood Mackenzie.

A subsequent report by Wood Mackenzie found that the circumvention petitions could eliminate 16 GW of panels from the US supply chain, which is two-thirds of all the panels the United States installed in 2021. SEIA estimates that as a result of this petition, the solar industry will lose 70,000 out of its 231,000 jobs.

“We’ve said that tariffs are not the right way to incentivize manufacturing, and that it is going to take time and policy commitment to move manufacturing into the United States at the scale that’s needed,” Hopper said. “The countries named in the petition have been reliable trading partners, and we need their products, in the near term at least, while we fight to establish a sustained and powerful manufacturing presence here in America.”