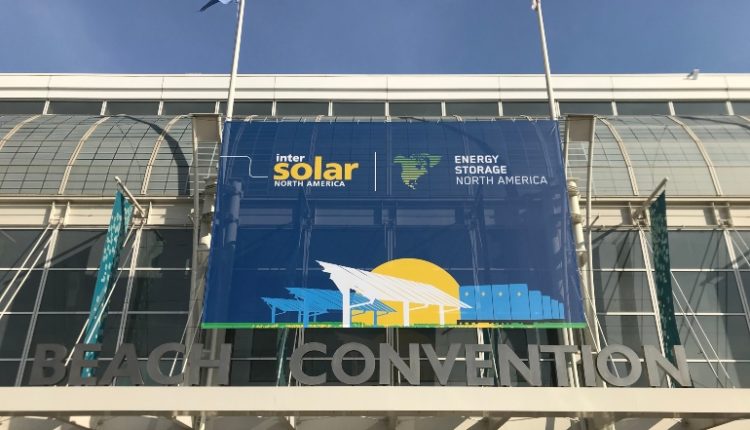 The general sentiment among companies exhibiting at Intersolar North America this year is, “It’s not much, but it’s more than we expected.” After the past two years without any in-person industry events, it’s not surprising that attendance isn’t record-breaking. Nevertheless, manufacturers from all over the country came to an event in Long Beach, California.

There has been a lot of talk this year on the erection, racking and tracking side of the industry about supply chain issues. Racking manufacturers have the additional challenge of purchasing steel at a time when the price of that raw material has risen and fluctuates. Steel is a huge part of racking, especially on ground mounts, and some manufacturers are exploring how to reduce the total amount of steel on their systems without losing performance.

However, the solar installation market is varied, serving job sites from standing seam metal roofs to former landfills, and the products reflect that. Here’s an overview of some of the assembly products and another in shipping logistics showcased at this year’s Intersolar. You can read editor-in-chief Kelsey Misbrener’s story about inverter and storage technologies here.

The common solution for tile solar installations is roof hooks, which are attached to the roof and extend from under the tile; or replacement tile props, which remove and replace an entire tile. SunModo presents a third option with the TopTile Assembly. It is installed by going through the tile instead of under it or by replacing it. A hole is drilled through the tile and it uses a “Tripod Mount” with three screws that can be drilled directly into the decking. Foam sealant is sprayed through the container before drilling. Then a malleable flashing is hand molded to the contour of the tile to create a watertight seal. 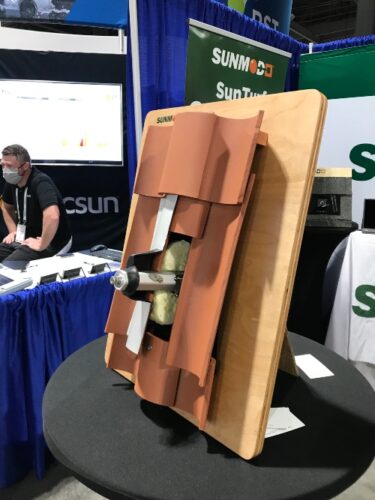 With the supply chain on everyone’s mind, OMCO Solar produces a solar tracking structure that is manufactured entirely in the United States. OMCO Origin is available in mono- and bifacial applications and in various panel orientations. The company showed an Origin tracker using two-sided modules placed in two-in-landscape. The torsion tube does not cover the rear on any of the modules installed on the tracker for better rear gains. 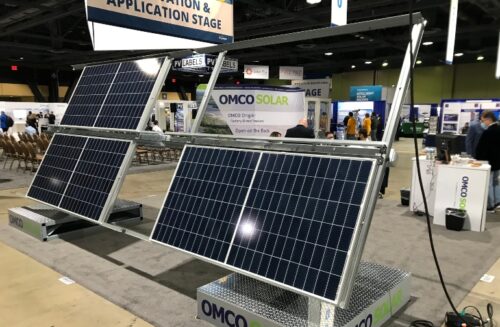 Pegasus Solar briefly returned to tile roofs and debuted the Tile Scissor Mount, a replacement for L-foot mounts on residential roof installations. It is composed of two moving steel pieces that interlock like scissors. Installers remove a row of tiles and install a steel gutter along the roof covering. The bottom of the Scissor Mount slides into that channel and comes through a replacement tile that flashes. When the Scissor Mount is clamped with a bolt, it is secured in the channel and remains in place. By using the Scissor Mount and this steel channel as a base, Pegasus eliminated the need to attach L-foot mounts with lag bolts at each mounting point. 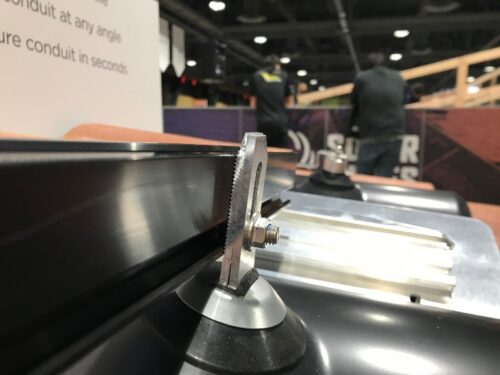 Kern Solar Structures does not necessarily offer a single solar carport solution, and that is what it is all about. The company produces carports by project to meet customer needs. One of those recent needs is integrating other electrical components onto the carport column. Kern can design carports with space for energy storage, charging of electric vehicles and installation of inverters.

.@ksstructures brought his Solar CarPort system with him. The CarPort is produced per project and offers the option of column integration with inverters, #EV charge and store. pic.twitter.com/UF8qJgywev

BCI Engineering designed: Completely twisted with ease of installation in mind. The shelving system consists of six components, the panel table rotates and the panels themselves are installed by sliding and clicking into place. BCI Engineering recently completed its pilot project with Full Tilt and expects it to scale quickly.

.@FullTiltByBCI shows how modules snap onto their own “Longhorn” rack channel. The racking system uses only six components and modules can be secured with cinch clips pic.twitter.com/UM8x3JvJo1

PV pallet tries to make shipping solar panels safer and less wasteful. Co-founder Luke Phelps is a former solar installer who treated many panels that broke in shipping, often from the wooden pallets they arrived on. Processing both broken modules and pallets prompted the development of PVpallet, a foldable pallet made from recycled plastic. The company has designed a shipping option that is reusable (up to 20 times) and, in case of failure, can be returned to PV pallet that can be recycled into a new pallet. It is built to hold modules on their side and the pallets can be stacked up to four high in storage. 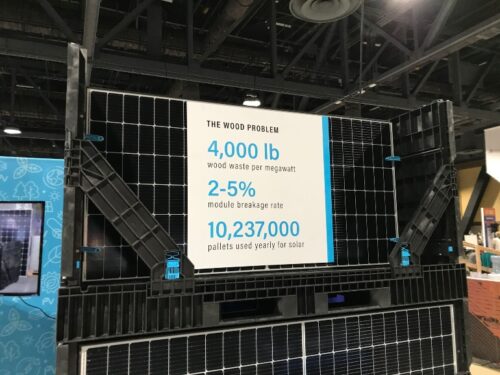 Solar Rack Manufacturer solega has offered a flagship product since 2014 and has stayed with it. FastRack 510 is the latest version of the company’s commercial roof and ground mount. It is a hybrid structure that can use ballast blocks or anchor fasteners and uses a single bolt size for panel fasteners. The FastRack is made of glass-reinforced nylon, which makes it non-conductive. It is designed to be module independent (even with large format modules) and can be installed at 5° and 10°.

.@sollega has brought the Fast Rack 510, a non-conductive, hybrid racking system. The rack can use ballast blocks or anchors and can be used on flat roofs as well as on the ground. pic.twitter.com/Aijlg133up