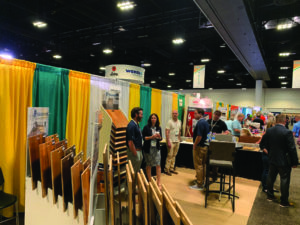 Indusparquet responsibly carves out its niche

Miami, Brazilian hardwood flooring manufacturer Indusparquet has always had a reputation for producing some of the best exotic hardwood floors available. But the company has grown into so much more. Supply chain issues and global events have put the company in a position to capitalize on its competitive advantages more than ever before. These include an OEM revenue stream and the purchase of a veneer plant to circumvent potential plywood shortages.

“This is the first year we will be doing more OEM business than with the Indusparquet brand,” said Jodie Doyle, vice president of sales and marketing. “Companies say, ‘What can you make for us?’ I think part of it is China and part of it is trying to figure out how to diversify; there are not many places to go.”

Brazilian oak, or Tauari (the official species name), looks different from American white oak because it is much cleaner. “Or a very clean European oak, but this one has no knots; it’s a very linear look,” explains Doyle. ‘It almost has a split and quartered appearance, although it is not split and quartered. And it is about 30% harder than American red or white oak.”

While Indusparquet doesn’t have a crystal ball, the timing couldn’t be better. “All these companies are trying to source premium white oak, which is a big problem because a lot of it comes from Eastern Europe,” he said. “Our company has invested heavily in Brazilian oak – we’ve probably bought stock for three years.”

To illustrate, Doyle said a major Midwestern distributor was looking for something different to put in their private label program. “They called us and said they thought he could only watch Canada or South America. Long story short, we now have four SKUs in the premium hardwood offering with approximately 1,200 displays.”

Indusparquet showed more foresight about a year ago when it bought a Brazilian veneer factory, essentially integrating the company vertically. This couldn’t be more critical as much of the plywood in the industry comes from Eastern Europe, leading many hardwood flooring manufacturers to look for alternative suppliers. “Now we are working on expanding the capacity to produce plywood, not only for floors, but also for other applications,” said Flavia Baggio, general manager. “The plan is to expand, but the truth is it’s a commodity and we’re not really a commodity.”

That’s not to say there isn’t an option. People also approached Indusparquet at NWFA about multiplex. “Three or four customers came to us and asked if we could get them plywood,” recalls Doyle. “We didn’t advertise multiplex anywhere, but they probably knew we were somewhat integrated and had the capacity. I don’t think we’re at the point now where we can sell it here in the US; we’re just not competitive enough for it. But if being competitive becomes secondary to ‘do you have it?’ then it might make sense to sell plywood.’

When it comes to plywood, Doyle said Baltic birch is the gold standard because it’s extremely stable, but South American pine is the next natural step for those companies. “If a company came to us and said they needed 10 containers a month, we probably would. I don’t think we want to sell a container here and there.”

Baggio said she sees tension on the multiplex supply lasting for a while, even if the war in Ukraine ends tomorrow. “That’s because most of the plywood manufacturers were not in Russia; they were in Ukraine because of lower labor costs, and many factories were completely destroyed.”

Doyle agreed and recalled a conversation he had recently about the matter. “I spoke to someone who was told by his source, ‘Look, you’ll have to find another source.’ And the man said, ‘What do you mean? Does this mean it will be two months before I get it?’ And he said, ‘No, you don’t understand; they bombed the factory. The factory no longer exists.’”

Importing exclusively from their parent company in Brazil, Indusparquet enjoys a competitive advantage over many Asian importers in that it pays approximately $10,000 for a container versus $20,000. “If we sell you Brazilian oak in processed form, that’s actually a big advantage,” Doyle said. “But if you put firm Brazilian cherries in a container, you only get 11 pallets in a container. So even though the container is cheaper, you get fewer square meters, so the cost per square meter is actually comparable to what you get from China “On the technical side, it’s actually an advantage for us. Not just the freight rate, but the lead time is probably half, 60 days vs. 120.”

Brazilian timber importers have come under scrutiny in the US to ensure compliance, as there have been “bad actors” in the past. To that end, Indusparquet has taken bold steps to ensure that every piece of wood it imports is legally and responsibly sourced. How daring? About $100,000 fat.

“We have decided to take a very proactive approach,” said Baggio. “What can we do to at least say we’ve done our part? Before being controlled by the big firms, such as Floor & Décor and Lumber Liquidators, it was more of a reactive approach. There are very few auditors for traceability and legality and risk management in the industry.”

To make sure it wouldn’t be subject to audits by the major retailers, Indusparquet turned to an Indonesian company called DoubleHelix to look into everything it was doing. One of the things DoubleHelix recommended was purchasing a software program that maps sourcing and mitigates risk. “It tells you what kind of documents you get, licenses, forest management permits, etc., all in great detail,” explains Baggio. “That’s one part: risk mitigation for all your suppliers, make sure they’re good, make sure they’re not judged by anything. But the second part of it is the chain of custody and making sure it goes back to the log and that part the software isn’t that good. But I can say that we have been very proactive in terms of investing in a company that would come with unbiased or no conflict of interest.”

Indusparquet has also invested and become stricter in compliance training. “Now our POs are required to provide us with chain of custody,” Baggio said. “We now have more formal procedures. We don’t have, if you think about it, a chain of custody for one container, because that wood doesn’t come from one forest; it comes from different suppliers and each chain of custody package is huge. So the best we can do is know your supplier.”

Doyle added that, in theory, on the automated system, if someone wants to ask where that product comes from, you’re able to click a few clicks, send it to them and they have a complete chain of custody. . “Right now, DoubleHelix would tell you that our company has always done the right thing. We have the documentation, but if you try to produce the paper needed to show everyone what that is, it becomes too cumbersome.”

No one has asked Indusparquet to do this. Rather, they say they wanted to be proactive. “The reason was that until we did, companies like Floor & Décor, Home Depot and Shaw, if they want to buy products from us, will struggle to do without the transparency layer,” explains Doyle. “We believe we owe it to our customers, large and small, to step up our game when it comes to sourcing and documentation transparency.”

Much of the focus is also on education, where both Baggio and Doyle agree they need to do more to carry the flag for Brazilian manufacturers doing the right thing. Managed forests are essential to the long-term viability of the entire ecosystem, which means cutting down trees to allow the rest of the forest to live and grow. “We can’t really explain a managed forest and how important they are to the ecosystem,” Baggio said. “That’s the only place we get products from – managed forests.”

Contract: State of the Industry 2022

Collaboration in a post-pandemic world